The Hagel Nomination: The Damage Is Already Done 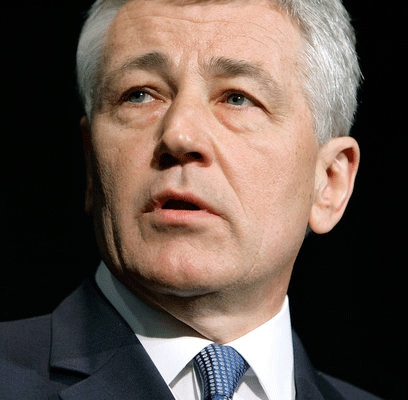 Why did President Obama nominate Chuck Hagel for the position of Secretary of Defense? First untenable answer: The former Nebraska senator is the best possible candidate for the job. Hagel has no experience at any level managing a vast bureaucracy like the Pentagon. He has no special expertise in defense matters, unless brave service in the Vietnam War qualifies, and he never distinguished himself in this area (or any other) during his 12 years in the Senate. By all reports, his intellect is only middling, and he is reported to have a quick temper, which resulted in a rapid turnover among his Senate staff.

Second untenable answer: President Obama did not know of Hagel’s past controversial positions and statements about such highly relevant issues such as Iran’s nuclear program and Israel. Ha ha. That record has been extensively combed over in the more than a month since the administration first floated the Hagel trial balloon. Even the liberal Washington Post editorialized against the Hagel pick on December 19. Ira Forman, the Obama campaign outreach director and head of the National Jewish Democratic Council, normally a Democratic lapdog, expressed grave misgivings about Hagel as early as 2007, when he was mulling a presidential run. In 2009, when Hagel was appointed to the president’s Intelligence Advisory Committee, Forman said that if he were being appointed to a policy role, “we’d have real concerns,” which is as close to criticism of the president as one will ever hear from Forman.

Besides being a regular on the American Arab Muslim lecture circuit in recent years, Hagel was quite an outlier in his twelve years in the Senate on a variety of Middle East issues. He was consistently one of only a handful of senators who refused to sign letters of support for Israel. In July 2001, he was only of only two senators to vote against extending the original Iranian sanctions bill, and in 2004 he was one of two to vote against the renewal of the Libya-Iran sanctions act. He refused to join in a letter calling for the EU to designate Hezbollah as a terrorist organization and voted against designating the Iranian Revolutionary Guard as a terrorist organization. He is on the board of directors of Deutsche Bank, which is currently being investigated for assisting Iran in the circumvention of sanctions.

THUS, THE ONLY CONCEIVABLE EXPLANATION for the nomination is that President Obama nominated Hagel with full knowledge of his controversial positions and statements precisely because he shares Hagel’s views and wants to identify with them. He is also not adverse to a nomination battle over the Hagel nomination.

The nomination of Hagel, said Senator Lindsay Graham (R-SC) on Sunday, is a very “in your face” one. Apparently, the president wants to take as confrontational a stand as possible with congressional Republicans. His opening offer in the fiscal cliff negotiations – $50 billion in new stimulus spending and ceding congressional oversight over the debt ceiling to the president – provoked open laughter from Senator Mitch McConnell. In a similar vein was President Obama’s response to Speaker of the House John Boehner, when the latter asked what he would receive in exchange for agreement to $800,000,000 in new tax revenues: “You get nothing, John. That one’s free for me.”

The president is a competitive guy, and I suspect he also wants to show Prime Minister Binyamin Netanyahu who’s boss and express his displeasure over the way Netanyahu went over his head in his speech to a joint session of Congress last year. Hagel’s appointment conveys the message loud and clear.

Certainly, Hagel’s supporters are spoiling for a fight. Not one has tried to make a case for Hagel on his merits but rather on the basis of the enemies he has attracted. The usual suspects have lined up in support of the opportunity to stick it to Israel and its American allies: J Street, Peter Beinart, Thomas Friedman, and a flock of “realists” – Stephen Walt, Brent Scowcroft, and Zbigniew Brzezenski. The “realism” of the latter group consists, as Jackson Diehl points out in Monday’s Washington Post, of constantly counselling the limits of American power – in Syria, in Iraq, and against Iran – with the single exception of the Israel-Palestinian dispute, where they urge the United States to impose a solution on the parties by fiat.

THE MAIN DAMAGE from the Hagel nomination has already been done, regardless of whether he is confirmed (the likely outcome). That damage consists of the signal that nomination conveys about the president’s own policy preferences. The Iranians will certainly read his appointment as a presidential statement that Obama is willing to live with containment of a nuclear Iran, despite his repeated rejection of that position during the 2012 campaign. And who can blame them.

If it turns out, as Dennis Ross continually assures us, that the resident is determined to use military force if there is no other way to stop the Iranian nuclear program, then, at the very least, the Hagel appointment will have made a military resolution of the issue more likely by misleading the Iranians.

To Jewish opponents of the nomination, however, I would offer this advice: Leave it to others to carry the ball and don’t make the issue one of Hagel’s alleged anti-Semitism. His policy positions are sufficiently far out of the mainstream for the argument to be made on that basis alone.

Proving what is in Hagel’s heart is difficult at best, and trying to do so will have the inevitable effect of turning the debate into one over attempts by “the Jews” to silence criticism of Israel with McCarthyite smears of anti-Semitism. Yes, grounds for concern exist. Hagel’s reference to the “Jewish lobby” (instead of by the more politically correct term, the Israel Lobby) and its power to intimidate on Capitol Hill is troubling. At a minimum, it suggests that he cannot understand America’s support of Israel except in terms of ethnic politics.

More problematic from my point of view was his staunch opposition to keeping open the USO Center for American sailors in Haifa, where the Sixth Fleet docks, when he headed the USO. By all accounts, the Haifa USO was one of the most popular with U.S. sailors and also one of the most financially viable. Hagel is reported to have said, “Let the Jews pay for it,” to Marsha Hatleman of JINSA (Jewish Institute for National Security Affairs).

At the very least, some of Hagel’s remarks about other minority groups would indicate that he did not learn all the rules of modern political correctness growing up in Nebraska, a state in which Jews constitute less than .33% of the population. He recently apologized to those other minorities, who could have torpedoed his nomination.

The American Interest’s Adam Garfinkle recently took Abe Foxman of the ADL to task for accusing Hagel of employing anti-Semitic stereotypes. The critique is of interest apart from the context of the Hagel nomination. Foxman, according to Garfinkle, has to resort to “anti-Semitism scaremongering” to keep the money coming for the ADL’s $50,000,000 annual budget. The original reason for the ADL’s creation – prevalent anti-Semitism – no longer exists, writes Garfinkle. And when Foxman claims that widespread discrimination against Jews is a major cause of assimilation, he is either being paranoid or wilfully dishonest.

The reason for assimilation, writes Garfinkle, has much more to do with declining religious education and observance, and the substitution in their place of Holocaust remembrance and the idealization of the State of Israel. When Hirsch Goodman of The Jerusalem Report once suggested to American Jewish organizations that they would do more for Israel by raising money for Jewish education than by purchasing Israel bonds, the response was, “Go tell Chaim Shmerel that you want a pledge for Jewish continuity and you’ll see the money go to the local golf course.”

President Obama’s determination to nominate Hagel at least has the virtue of clarifying the president’s own positions vis-a-vis Iran and Israel. It will be interesting to see whether the 70% of American Jews who voted for him take note. But regardless, the fight over his nomination should not be a “Jewish thing.” There are plenty of others willing to lead the charge.