Our Moon: A Torah View of the Apollo 11 Moon Landing 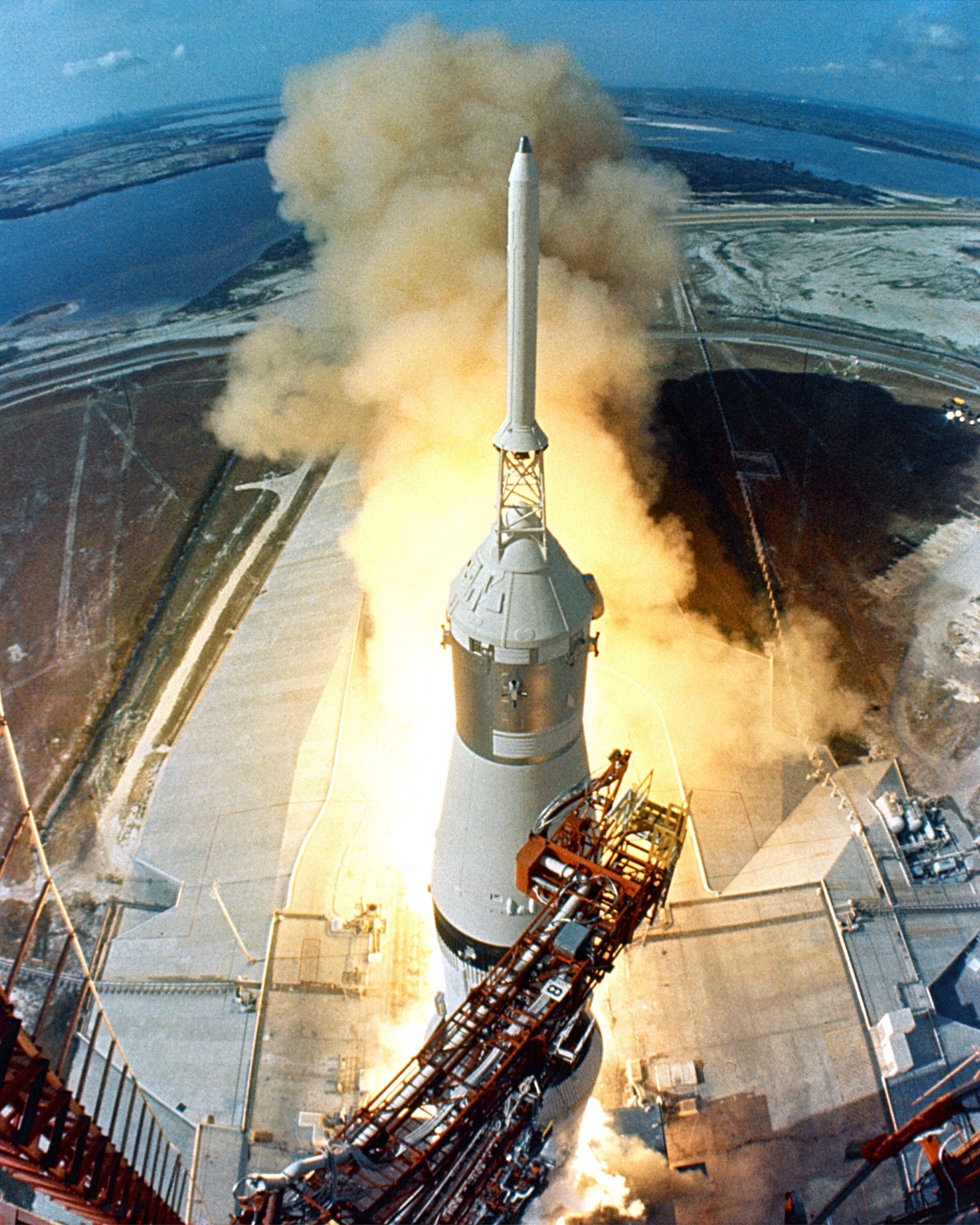 Neil Armstrong’s famous words upon placing the first footprint of a human being upon a celestial object became part of mankind’s eternal statements. Since most people were caught up in the political, scientific, military or other practical reactions to this event, it behooves us, with the distance of a half-century, to pause for a Torah view of this moment.

My own memories of that experience mirror the reactions of the hundreds of millions who watched Walter Cronkite take off his glasses and look away from the camera, overcome with emotion. The man whose profession called for instant and eloquent reaction could only muster the simple words, “Oh boy.” It is hard to criticize the laconic muted response, since for most people this seemed to be the most historic moment anyone would ever experience. Mankind had always been limited and literally grounded to our mother planet and atmosphere. To suddenly see – as everyone except for the most habitually cynical conspiracy believer – the experience that mankind was suddenly able to reach the first step toward the stars will forever be unforgettable.

Watching the event with my Holocaust survivor parents imprinted upon me the thought that this represented hope for mankind and the opportunity to lift itself above pettiness and mindless rage to a truly universal new stage. That obviously has not happened, so it is certainly time to look at a Torah view of this otherwise important milestone for humanity.

Rav Yaakov Kamenetzky zt”l (Emes L’Yaakov, Bereishis, revised edition, page 15) records that “when we saw people descending on the ladder from the plane to the moon, it confirmed the opinion of the Ramban (Bereishis 1:1) that [everything in the universe] is inanimate as is the earth itself. This as opposed to the contention of the Rambam (Hilchos Yesodei Hatorah 3:9 andHilil Hilchos Yesodei HaTorah 3:9 and Moreh Nevuchim 2:4) that the heavenly bodies are sentient beings with souls who live and recognize their Creator. When I saw

, I consoled myself that our tradition had triumphed over philosophy.”

This reaction evokes an anecdote that occurred even longer ago with two gedolim of our time. The Steipler Gaon was walking with his then-young son, Rav Chaim Kanievsky. Suddenly, the elder man called his child over to the body of water they were passing, stating excitedly, “Look at the greenish surface of the water. That’s yeroka she’al pnei hamayim,” generally translated as seaweed, but literally meaning “the green on top of the water.” The lesson Rav Chaim learned from his great father and later conveyed in thousands of ways was that everything in the world is both reflected in the Torah and can be used to understand its words and descriptions.

Rav Kamenetzky, too, was not overcome with emotion by the event or felt forever changed. He merely applied it to an ancient disagreement between Torah giants about the exact nature of something that at the time was unreachable and therefore could not be properly analyzed. Now that it was available, it could be used to resolve an ancient dispute.

Torah giants such as the Rogatchover Gaon would constantly look into the Torah to obtain an insight into physical phenomena (see Rabbi Menachem Kasher, Mefaneach Tzefunos at length).

The source of this approach would seem to be the famous words of the Zohar (Parshas Terumah): “Hashem looked into the Torah and then created the world.”

To be sure, major students of the Arizal (see Rav Chaim Vital, Shaarei Kedusha 3:1) defend the Rambam’s position by explaining that the Rambam meant that, like all of Hashem’s creations, the moon and all such entities have a soul, even though it does not have free will or an independent intellect. This was not contradicted by Neal Armstrong’s landing nor the next five replications of the 1969 event.

A mussar approach to this historic event was characteristically suggested by Rav Shlomo Wolbe, the famed mashgiach. Soon after Apollo 11, he gave a shmuess (see Daas Shlomo, Maamorei Yemei Ratzon, page 81) noting that the astronauts were quarantined for 21 days after their much-hailed return to make sure that they were not carrying bacteria or viruses from that unknown environment. In an original penetrating thought, he described what would have happened if there was indeed intelligent life on the moon. They would undoubtedly have insisted upon locking our visitors until they could be sure that they were not going to spread some of the scourge of planet earth, such as lack of belief, lashon hara, etc. On the other hand, if the Chofetz Chaim himself had been one of those astronauts, he would undoubtedly have seen a pure, innocent world that would, in turn, have inspired him to even greater levels of kedusha.

I believe it was the Imrei Emes who chastised one of his chassidim who returned from a visit to Eretz Yisroel bearing nothing but criticism and negative tidings, such as those of the meraglim. The Gerrer Rebbe said to him that Eretz Yisroel is like a homeowner who evaluates his guest. If the visitor is someone he cares to impress, he brings out his best china and cleans and shines up the house. For someone of a shabby nature, he leaves things as they are or worse, making sure there will be no future visits. The entire world, concluded the rebbe, is more like a mirror than an original painting. Perhaps this was something of Rav Wolbe’s intention in invoking the interesting mental image of the Chofetz Chaim as an astronaut.

Over the years, along this mussar path, I have heard or considered other lessons from this and other aspects of the space program. One can reach the highest of heavens with effort and the proper mesirus nefesh. Even a slight deviation from the proper path at the beginning, when it seems innocuous, can later cause one to miss the target entirely, bring about great damage and destruction, and even cause one to give up the project entirely. Even if one fails at the same task many times, there is no reason to give up a proper cause.

When Yuri Gargaren, the Soviet cosmonaut, became the first human being in space in April 1961, the communist official line was that he had been to heaven and there was no G-d. However, even before Apollo 11 landed on the moon, the Apollo 8 astronauts read from Bereishis while just orbiting the moon. As many gedolim commented after World War II, those who believe in Tanach and that there is a Creator will always triumph over atheists and the anti-religious. All three astronauts described the sight of the earth as seen from space as “beautiful” and “fantastic,” confirming that even an objective view of Hashem’s universe from a fresh angle reveals a fresh angel in disguise.

Two other perspectives upon space can help us gain a more Torah-oriented view of the world and indeed universe around us.

Rav Leib Gurwicz (Meorei Shearim) quotes from Rav Yerucham Levovitz, the Mirrer mashgiach that “if someone would ask me there is life on Mars, I would answer perhaps there is. However, I would add definitively that it is not relevant to us at all, because if there was something for us to learn from them, the Torah or Chazal would have revealed their existence” (Ohel Moshe, Bereishis, page 60).

However, when the Russians originally sent up their Sputnik in 1957, the Brisker Rov was asked if it was possible, as people were beginning to predict, that mankind will be able to live on other planets. He answered that the Torah reveals to us the purpose of the moon and the other heavenly lights: “They shall serve as signs and for festivals and for days and years” (Bereishis 1:14). The Rov concluded that “since the Torah declared that this alone was their purpose, they do not serve as a place for settlement” (Nesivos Rabboseinu).

Rav Chaim Shmulevitz used to tell, amidst many tears, the story of a survivor of Churban Europa. “I asked him,” the rosh yeshiva would often relate just after Kiddush Levanah, “how could you survive those horrific conditions without being meyayeish – giving up – your Yiddishkeit and sanity?” The man smiled shyly and answered, “Rebbe, they took away our tefillin, our tzitzis, and our siddurim. We had no matzah, no lulav and esrog, no shofar or machzor. But once a month we went and risked our lives to say Kiddush Levanah. When we recited the eternal words ‘those’ – us! – ‘who are destined to renew themselves like [the moon],’ I thought to myself that Hashem will revive and refresh us like that moon. This saved me from plummeting into the throes of yiush and despair.”

The Brisker Rov was right. Everything in the universe was created for us, whether or not we understand why, as we learned from the Steipler. The moon can be as much a cheftza d’kedusha as a lulav or a shofar, even though, as we say in Kiddush Levanah, we can generally not touch it. Perhaps our ability to reach it periodically is a reminder that, after all, it was created for us. Men on Mars do not affect us, but having the moon upon which to make a brocha can save our souls when necessary.