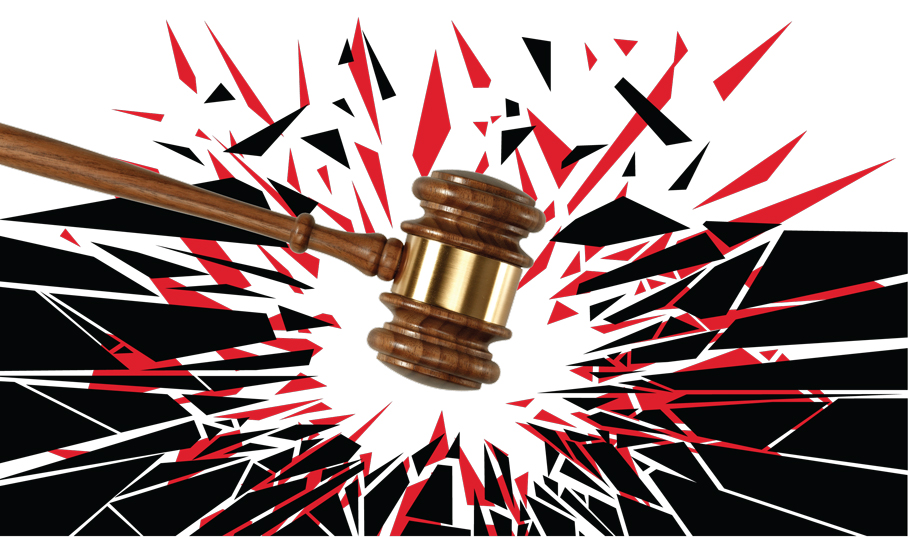 A federal judge’s harsh rebuke to the Department of Justice for dishonesty and deceit in the immigration-amnesty case, has important lessons for the country, legal experts say. The case highlights what the Wall Street Journal and others call “a culture of lawlessness” and “ethics rot” in the DOJ that are eroding the moral authority of that institution.

In the immigration-amnesty case, DOJ lawyers repeatedly lied to Texas federal Judge Andrew Hanen about crucial facts. After being called out on their conduct, the lawyers admitted they had made false statements and apologized but insisted it was unintentional, the result of having “lost focus” or forgotten the actual facts.

Outraged at the misconduct, Judge Hanen rejected the Department’s excuses, ordering sweeping measures aimed at “sterilizing the ethics rot,” in the government body, in the words of a WSJ editorial, “The Miscarriage of Justice Department.”

Noting that he did not have the power to disbar them, Hanen ordered all lawyers “employed at the Justice Department in Washington, D.C. who appears, or seeks to appear, in a court (state or federal) in any of the 26 Plaintiff States annually attend a legal ethics course.” The lawyers must attend the course in person, not online or on conference calls.

His 28-page ruling last week calling the lying “intentional, serious and material.” It caused harm to 26 states involved in a lawsuit with the government, the ruling said, and engendered a profound loss of public trust.

“The United States Department of Justice now admitted making statements that clearly did not match the facts. It has admitted that the lawyers who made these statements had knowledge of the truth when they made these misstatements,” the judge wrote. “Such conduct is certainly not worthy of any department whose name includes the word ‘Justice.’”

The ruling came in connection with a lawsuit brought by 26 states that challenged the constitutionality of Obama’s two executive orders that override the law regarding illegal immigrants. Under the two orders, Obama unilaterally granted 3-year amnesties to millions of illegal immigrants who would otherwise be subject to deportation.

The amnesties are part of the executive action the president took in November 2014 to halt the deportations. Known as DAPA and DACA, the amnesty programs shield most of the 11 million unauthorized immigrants in the country from being removed from the country. In the case of up to 5 million, Obama granted work permits, a 3-year stay of deportation and other benefits.

Texas led 25 other states in the suit, arguing that the president broke the law and violated the Constitution. In February 2015, just days before DAPA and DACA were scheduled to go into effect, a federal judge agreed that the administration had violated Administrative Procedures Act, and issued an injunction on the executive orders.

The President appealed the injunction but it was subsequently upheld by the Fifth Circuit Court of Appeals. The Supreme Court which is now reviewing the case, with a ruling expected in June.

In Cahoots With The Department Of Homeland Security

What enraged Hanen was his recent discovery that the DOJ lawyers were aware that the Department of Homeland Security had continued processing Obama’s amnesties in violation of his explicit order to halt the program, but had hid this information from him.

The lawyers in fact had repeatedly promised the court that the amnesty plan would not be implemented until Feb. 2015 — when, in fact, they knew it was being implemented all along, granting amnesty to over 100,000 illegal immigrants. These deceptive promises lulled the plaintiff states into forgoing legal motions such as restraining orders and permanent injunctions on the executive orders.

After discovering the deceit, Hanen forced the attorneys to turn over all their communications with the White House and the Department of Homeland Security regarding the amnesty orders. The lawyers pleaded with the court not to look at the White House-related documents on grounds that it would intrude on the president’s powers, the Washington Times reported.

“The Department of Justice and the White House counsel’s office sometimes confer regarding civil litigation that impacts high-priority policy initiatives of the administration,” the attorneys said in a 34-page brief filed a few weeks ago. The attorneys admitted that more than 1,500 Homeland Security employees knew the three-year part of the amnesty was in effect as of November 2014.

The brief repeatedly apologized for misleading the court, while insisting it wasn’t intentional.

Hanen rejected the claim that the distortions of truth were unintentional. In his order he lists the specific statements made by DOJ lawyers in court and on conference calls that were outright lies, and then enumerates all the applicable ethics rules that the DOJ lawyers violated.

“Counsel’s conduct in this case was not only unethical, but a failure to comply with federal law,” he added. “There seems to be a lack of knowledge about or adherence to the duties of professional responsibility in the halls of the Justice Department.”

“When I asked you what would happen [with the amnesty orders] and you said nothing, I took it to heart. I was made to look like an idiot,” a furious Hanen upbraided Katherine Hartnett, one of the government’s lawyers, at a court hearing. “I believed your word that nothing would happen… Like an idiot, I believed that.”

Although he could have done so, Hanen decided not to strike all the government’s filings in this lawsuit (thus granting victory by default to the 26 states), even though the government’s “egregious conduct merits it” because of the “national importance of the outcome of this litigation.”

In other words, the case needs to be heard by the Supreme Court, he said, because the overstepping of executive authority by the Obama Administration is a serious matter that needs to be addressed.

The misconduct [Judge Hanen] unmasked should trouble Americans of all political persuasions, the editors of Wall Street Journal wrote. “Prosecutors often abuse their powers in run-of-the-mill cases. But this is a constitutional challenge with major consequences for the separation of powers, and the deceit must have required the participation and coordination of dozens of political appointees and career lawyers.

“That suggests a serious institutional failure, not mere rogue actors. President Obama’s overstepping the legal limits of his executive power has apparently “spread a culture of lawlessness among his lawyers too,” the editorial said.

The Constitution’s Separation of Powers Doctrine prevents the concentration of power in the hands of a single individual. If a president has the power to nullify laws by refusing to enforce them or by supplanting them with his own policies, that obviously drains the doctrine of any meaning.

After Hanen’s harsh rebuke became public, Texas U.S Attorney Ken Paxton who is one of the lead attorneys in the lawsuit by the 26 states, said, “From the start, our lawsuit has been about asserting that one person cannot unilaterally change the law, and part of that is ensuring everyone abides by the rule of law.”

The Supreme Court ruling in United States v. Texas, expected this month, will not only critically impact immigration law going forward, but will also decide the even more high-stakes question of whether there will be any meaningful limits on executive power.

Lesson for the Rubashkin Case

For those watching the latest phase of the Rubashkin case play out in Iowa, Judge Hanen’s stinging rebuke to the Department of Justice has particular relevance.

Hanen accused the lawyers of making representations in “bad faith” that breached Federal Rule of Civil Procedure 11(b), which makes such conduct punishable.

“The ethics and conduct rules require a lawyer to “(1) tell the truth; (2) do not mislead the Court; and (3) do not allow the Court to be misled,” Hanen blistered in his order. “The Government’s lawyers failed on all three fronts.”

Government lawyers in the Rubashkin case committed the same failures, the defense’s Merits Brief, part of the 2255 Motion filed in March, contends. The brief supports its claim with meticulously documented evidence that the government lied to and misled the Court about its unlawful tactics in thwarting the sale of Agriprocessors, while it was still capable of netting a sale price high enough to repay its $27 million loan.

The government’s deceit centered around pivotal testimony by its key witness, Paula Roby, who denied U.S. attorneys had ever implemented a “no-Rubashkin edict” among would-be buyers.

Prosecutors knew this was false as was later proven by the defense when they produced a transcript of the government’s “no-Rubashkin” meeting, as well as sworn affidavits from nine would be purchasers and from the bankruptcy trustee himself testifying to the government’s threats and intimidation tactics.

In addition to eliciting false testimony from Roby, the government allowed the testimony to remain on record, uncorrected, where it shaped Judge Linda Reade’s draconian sentence calculations, as she herself explicitly admits in her ruling. What does a government lawyer do when his lies have been exposed?

In the immigration amnesty case, the government lawyers apologized and groveled before Judge Hanen, saying it was all a mistake, and begging him not to look at sealed documents that might incriminate the Obama Administration.

In the Rubashkin case, government lawyers have taken refuge in doublethink, a tactic made famous in the 1950s novel, “1984” by George Orwell. Doublethink, or as it later became known, doublespeak, is the act of asserting two mutually exclusive facts, and using confusing and contradictory jargon to insist that both are true.

Prosecutors in court papers continue to deny they had employed a no-Rubashkin rule but, in effect, also say: “Even if Roby lied, but of course she did not lie, you, Sholom Rubashkin, had your chance to call us out on it, cause we had turned over this or that document that contradicted her testimony.

“And even though we didn’t give you the really incriminating evidence you asked for because you didn’t ask for it, your lawyers should have set the record straight with the judge that Roby was lying. Although of course what she was saying was accurate.”

“But your lawyers dropped the ball because they should have asked for documents that we were withholding even when they asked us for them. They should have suspected we were lying and cheating and not have let us get away with this deceit. So too bad. Rubashkin will have to rot in jail because even though we lied, it’s you who messed up.”

Will a 100-page government brief that makes an art form of doublespeak be allowed to rule the day? Lessons from the scandalous immigration-amnesty case in a Texas courtroom and a judge’s moral outrage and decisive response will hopefully point the way.