Tu B’Shvat, the Oldest Yom Tov of All 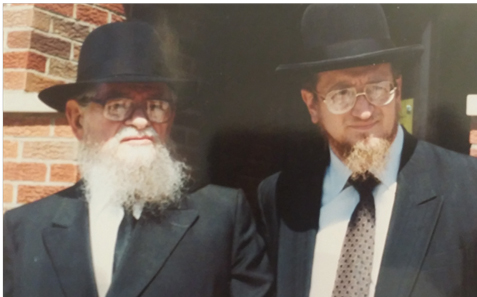 Tu B’Shevat does not carry many halachos. Even the minhag to eat various fruits did not appear in seforim until the year 5324 (1564). The Magein Avrohom (131:16) attributes the custom to Ashkenazic Jewry only and there is no record of its being mentioned by the Arizal or his immediate talmidim. Yet, beginning in 5560 (1800), the minhag has grown exponentially, especially amongst Chassidic rebbeim and their followers. If we examine this special day carefully, we will discover that there is an amazing bounty to be reaped, if we take advantage of the opportunity. This year, especially, since it falls out on Shabbos, our usual hectic workdays and other interferences should not stop us from gaining all we can from this wonderful Yom Tov.

On one level, although we noted that Tu B’Shevat did not become well known for centuries, it may actually be the oldest Yom Tov of all. Rav Menachem Mendel Paneth of Dezh, son of the Mareh Yechezkel (Maaglei Tzedek, end of Beshalach), refers to Tu B’Shevat as “the Yom Tov of Adam Harishon.” The explanation given for this cryptic appellation is that after Adam sinned on the Friday of Rosh Hashonoh (see Sanhedrin 38b), he worried that his transgression had doomed the world to destruction. Indeed, as the winter days became shorter, he feared the worst. However, on Tu B’Shevat, when the days begin to get longer, in anticipation of the restorative days of spring ahead, he made this day into an everlasting Yom Tov.

Furthermore, Adam was also afraid that due to the curse given to the earth (Bereishis 3:18), it would no longer produce fruits, grains and vegetables. Indeed, all he saw was the destruction and desolation of winter, fueling his trepidation that the earth was wasting away forever. Then came Tu B’Shevat, when the sap began to rise in the trees (Rashi, Rosh Hashonoh 14) and Adam was relieved and elated that life would not only continue, but that renewal was both possible and even happening. And so he celebrated.

The Bobover Rebbe, Rav Shlomo Halberstam zt”l (see Etz Chaim Journal, 16:1:81:268) adds that it is actually the mandate of every Jew to sanctify the material world, bringing holiness into the mundane. Thus, eating, drinking and all permissible human activities can be consecrated by uplifting the merely optional to fulfill Hashem’s will. He quotes the pesukim in Perek Shirah regarding the songs of the heaven and the earth: “The heavens declare the glory of Hashem and the firmament tells of His handiwork” (Tehillim 19:2). The earth, on the other hand, sings, “Hashem’s is the earth and its fullness, the inhabited land and those who dwell in it” (Tehillim 24:1).

The Yismach Moshe explains that the heavens and the earth are in effect singing a duet. The serenade of the heavens is that Hashem’s glory is always manifested through their splendor. The earth retorts that, on the contrary, through its inhabitants, His praise is spread to all G-d’s creations and is not limited to the celestial heights.

The rebbe goes on to explain that the term shomayim refers to the purely religious matters such as prayer and Torah study. The earth, however, claims that it can spread kedushah throughout the universe through man’s discretionary actions, such as eating and drinking. When these are performed lesheim Shomayim, for the sake of Hashem, the mundane is suddenly transposed into the holy.

“For this reason,” the Bobover Rebbe continues, “Adam joyously declared Tu B’Shevat to be a Yom Tov, for day represents geulah, redemption, while night represents golus, exile. When Adam saw the desolation of dwindling light and barren trees, he thought that man would no longer be able to serve G-d through the material world, for it would provide no sustenance to be blessed or celebrated. But when he saw the sap rising in the trees and the days triumphing over darkness, he happily saw the light of redemption ahead as well.”

These words strike an even more harmonious note on this Tu B’Shevat, which coincides with Shabbos Shirah.

We are now in a position to understand more deeply the intricate relationship between man and tree. We know that the posuk itself makes the analogy “for man is the tree in the field” (Devorim 20:19). But what is the significance of this metaphor?

The Rebbe of Toldos Aharon, Rav Dovid Kohn (Hadeiah Vehadibbur, volume 1, No. 94, page 31), explains that “at the end of the winter, when most of the rains have gone, the branches are sadly empty and the trees appear dead and dry, yet ‘there is hope for a tree. [Even] if it is felled, it can still renew itself and its branching will not cease; were its root to become old in the ground and its trunk to die in the dirt, with [but] a puff of water it would blossom and generate branches like a sapling’ (Iyov 14:7-9). Man, too, who has been dried by sin, nearly destroyed by iniquity and close to total despondence, can be revived through coming days of redemption and kabbolas haTorah.”

Rav Yisroel of Tchortkov also saw trees as a source of hope after desperation: “Man is exhorted not to give up, for he is like the tree. Renewal is coming, if you only believe in Hashem” (Ginzei Yisroel, page 349). This explains why many Chassidic courts sing the songs of Rosh Hashonoh on Tu B’Shevat (e.g., Minhagei Rizhin, page 93), for not only is it a day of judgment for the trees, but Adam also discovered the secret formula for all of us to succeed in judgment on this special day. The Rebbe of Sadigura would interpret the three letters of saraf (sap) rising in the trees as the double bracha of shefa refuah parnassah.

With this approach, other aspects of the importance of the month of Shevat begin to fall into place as well. The mazel of the month of Shevat is d’li, which means “pail,” for just as the lower the pail is dropped, the more water it brings up, so man eventually rises highest when he lowers his ego to embrace the middah of humility.

Adam, the prototypical man, known to even the gentile ancients as Everyman, realized his own transience when he thought that the world was disappearing before his very eyes. When the first Tu B’Shevat reassured him that life would go on, it was a much-chastened and humbled man who emerged to serve Hashem. In fact, the word ish, which means man, and Shevat share the same gematria (numerical value) of 311, for Shevat is the month when man can shine despite – and perhaps because of – his prior fall (Shaar Yissoschor, Shevat).

Rav Dovid Cohen, rosh yeshiva of Yeshivas Chevron, brings the poetical words of the Maharal to our attention: “Man is indeed a tree who is planted in heaven, for the head, which represents man’s root, actually points skyward, for through his intellect he is rooted firmly, where none of the winds and hurricanes can dislodge him.”

As Rav Cohen notes, the Maharal elsewhere defines man as “an upside-down tree,” with his roots above, rather than below, because his soul is from heaven on high. Rav Cohen explains that “Man is a composite of body and soul. Since his essence is his soul, although it is invisible and far from obvious, man is constantly drawn toward his spiritual side, for that is what defines him.” Thus, we may conclude that man’s greatest consolation, even when he falls, is that he will still drift upward, for that is from whence he has come.

This Litvishe explanation shines new light on a Chassidishe maaseh. Rav Yitzchok Eizik of Ziditchov was distributing fruits to his Chassidim at a Tu B’Shevat tish, but despite the massive preparations, there were soon no fruits left and many Chassidim were disappointed not to receive the rebbe’s shirayim. Suddenly, the rebbe wisely offered a valuable substitute.

“You want fruits?” the rebbe asked with a smile, “I will reveal to you where you may find them. Chazal tell us, ‘These are the mitzvos whose fruits a person enjoys in this world but whose principal remains intact for him in the World to Come…and the study of Torah is equivalent to them all’ (Shabbos 127a). Go now and learn Torah and you will find that there is no shortage, in addition to the benefit you will retain for Olam Haba” (Sippurei Chassidim, Moadim, page 239).

As the Chevron rosh yeshiva clarified for us from the Maharal, trees and their fruit are a constant reminder for us that we, too, have roots and can produce fruits. Our roots, which are in heaven, beckon us to look ever higher to our true potential, not to be brought down by our lower inclinations.

I had the zechus many times of witnessing the Telsher rosh yeshiva, Rav Mordechai Gifter zt”l, look up at the heavens and proclaim the words of Yeshaya: “Se’u marom eineichem ure’u mi bara eileh – Raise your eyes on high and see Who created these [things]” (40:26). The Sadigura Rebbe (Avir Yaakov, Shemini Atzeres, page 230) asks, “Why must one look toward the heavens? Can’t we see niflaos haBorei down here on earth as well?” From Rav Gifter’s face and inflection, I felt echoes of the Maharal’s teaching that scanning the heavens brings us back to our true roots, the home of our neshamos, which are cheilek Eloka mimaal, hewn from the heavens above and so help us to strive for what would otherwise seem to be unreachable heights.

May our inspiration from both heaven and earth lead us to enjoy the fruits of both worlds as well.