The True Greatness of a Yiddishe Mamma 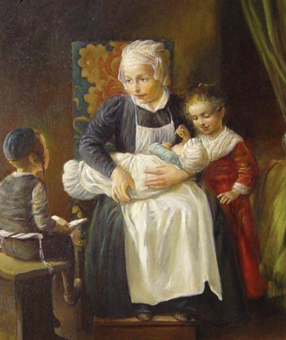 No, it’s not Mother’s Day, but since when did the Torah limit our kavod for either parent to one day a year? Actually, the impetus for this tribute to our mothers is a book review in last week’s New York Times (Sunday, August 28, 2016) titled “How To Raise A Mensch.” The book under review, by Marjorie Ingall, is somewhat sarcastically called “Mameleh Knows Best: What Jewish Mothers Do to Raise Successful, Creative, Empathetic, Independent Children.” I must confess that I have not yet read the book itself, but the reviewer, Jennifer Bleyer, a senior editor at Psychology Today, lists, among the values Mrs. Ingall extols, “a healthy distrust of authority.” Her source for attributing this positive trait to Jewish tradition is that “Jews come from a vertiginously long tradition of questioning, yammering, challenging and disputing.” She goes on to reduce our entire Torah Shebaal Peh to “pretty much a bunch of dudes contradicting one another… Encouraging such chutzpah and sharp debate from a young age has not only helped the tiny religious minority to survive centuries of persecution, but also made them creative freethinkers as well as humanitarians who stand up for what’s right.”

Whew! This must be what Chazal had in mind when they wrote of “light and darkness reigning together” (Chagigah 12a; Yerushalmi, Brachos 8:6). Although some of these sentiments may approximate true Torah values, surely being “freethinking” rejecters of all authority is not at all what Jewish tradition wants emanating from Jewish mothers.

So, the New York Times got me thinking about the time-honored role of the revered eim b’Yisroel. What do we see as the job description of Jewish mothers and how should it be fulfilled in our day? One place to begin, since she identified herself by her motherhood, is the shofet Devorah. At the beginning of her famous song, which is annually read as the haftorah of Beshalach, Devorah declares that she “arose as a mother in Yisroel” (Shoftim 5:7). The Metzudas Dovid explains that Devorah meant that “just as a mother chastises her child to put him on the proper path, so do I for all of Yisroel.” This gives us a sharp snapshot of the most basic role of a Jewish mother. It is to transmit the mesorah of the generations to her children vigilantly and fearlessly.

Now, one might wonder a bit about this self-defining role that Devorah assigned for herself and, by extension, all Jewish mothers. Isn’t this the function of a father, to whom the Torah (Devorim11:19) assigns the responsibility to teach Torah and mitzvos? One might perhaps contend that this is a halachic question. The Shulchan Aruch (Orach Chaim 343) declares that a father must stop his child from eating non-kosher food, with the Magein Avrohom commenting that the mother does not have the same obligation. However, the Mishnah Berurah cites a number of poskim who disagree, asserting that mothers, too, are obligated in the mitzvah of chinuch. However, this does not answer our question, since all agree that fathers must fulfill this role, although only some poskim require the same of mothers. Neither are we particularly helped by the opinion of those Rishonim (see Me’iri, Nozir 29a) that mothers are only obligated in Chinuch when there is no father, since Devorah was clearly identifying a special role for mothers throughout the generations, whether or not a father is a part of the family equation. So where indeed do mothers come in lechatchilah, even in the most ideal and best of circumstances?

One answer was given by the Shela Hakadosh (Shaar Ha’osiyos, Derech Eretz). He writes that “the obligation to admonish children is greater for mothers than fathers, since they are at home more.” He goes on to depict the well-known fact that women are more aware and available to issue constructive criticism to children when and where things are usually happening. But even this approach does not explain expressions such as “the promise given to women by Hashem is even greater than that given to men” (Brachos 17a). Even though the Gemara explains this phrase as referring to women taking their boys to yeshiva and waiting for their husbands to return from the bais medrash, there is also a somewhat undefined role here for Yiddishe mammas.

One Rishon gives us an inkling of this tremendous role played by the noble Jewish mother. The Gemara (Bava Basra 121b) relates that from the 15th of Av, men are obligated to add to their nighttime learning. Rav Yosef sharply concludes that “one who does not add this extra learning time, his mother will bury him.” Again, why the mother and not the father?

The Maharsha answers based upon a Gemara (Sanhedrin 70b) depicting the seemingly harsh lessons Shlomo Hamelech learned from his mother: “This teaches us that Shlomo’s mother bound him to a post and said to him, ‘What, my son! And what, son of my womb! And what, son of my vows!’(Mishlei 31:1).” The Gemara explains in great detail the mussar that Shlomo’s mother was addressing to him: “What are you doing in the company of kings who drink wine and become intoxicated?” and many other specific critiques. Eventually, as the Gemara concludes, Shlomo accepted his mother’s admonishment and became the great author of Shir Hashirim, Mishlei and Koheles. The Maharsha derives from here the maxim that “just as Shlomo’s mother rebuked him, so should every Jewish mother rebuke her child.”

Rav Yitzchok Zilberstein (Lechanech Besimcha, page 694) adds that these powerful words of the Maharsha also serve to explain the words of Chazal (Bechoros 60a) in praise of Rav Huna’s wisdom: “Privileged is the mother of Rav Huna.” What about Rav Huna’s father? Doesn’t he get any credit for raising such an incredible talmid chochom? Rav Zilberstein answers that “one may conclude that if a talmid chochom as great as Rav Huna arises, his mother must have vigilantly made sure that he was brought up properly at home as well as in the bais medrash.

Although all of this is surely true of our beloved Jewish mothers, I believe that the secret of Jewish motherhood goes even deeper than these sources. To discover this special trait of Jewish mothers, we shall have to go back even further than Devorah to the four imahos, Sarah, Rivkah, Rochel and Leah. We know (Brachos 16b) that just as for all eternity, we have only three fathers, the four mothers as well remain unique.

Furthermore, Chazal (Safra 8:9) teach that just as there is a special bris – a covenant – with the avos, there is a bris with the imahos as well. What is the nature of the covenant with the mothers? What was their unique contribution to Knesses Yisroel, which will help us understand the pivotal accomplishments of our own imahos as well?

A fairly direct and simple analysis will show immediately (heard from my rebbi, Rav Yitzchok Hutner zt”l, and see, for instance, Rabbi Dovid Goldstoff, Divrei Torah, Pirkei Hagar VeYishmoel, page 187) that each of the imahos protected the avos from evil influences and cleared the path for the purity of Am Yisroel. For instance, Sarah Imeinu made sure that Yishmoel would not sully Klal Yisroel from within, although she could not prevent the later onslaughts from his murderous nature. Rivkah also protected Klal Yisroel from the depravity of Eisav, although we continue to suffer from his butchery. Rochel and Leah, too, although they dealt with the perfection of the Shivtei Koh, each contributed valiantly to the purification of Klal Yisroel and its protection from Lavan and Eisav, never allowing the outside – even ostensibly familial – influences to diminish the kedushah and taharah of Yaakov Avinu’s holy abode.

So now we know. The side of Jewish motherhood we discovered which seems to flow from mussar and criticism is really protectionism at its best. The eim b’Yisroel stands tall and proud, guarding her children from the baleful influences around them. Even if they are family or friends, they must sometimes be kept away, so that children can grow unadulterated in kedushah.

In case this should seem a bit severe, listen to the soothing words of Rabbeinu Yonah (Iggeres Hateshuvah 72) discussing why Hashem told Moshe Rabbeinu to speak to the women first (ko somar levais Yaakov): “This prioritization was because they are the ones who send their children off to school and keep an eye on them so they will develop into bnei Torah. Then when they arrive from school, they show them love and affection (merachamos aleihem), drawing them near with wonderful things (devorim tovim) so that they will be motivated to continue learning Torah. The mothers also protect them…and teach them to be G-d fearing.”

So there we have it. As usual, it is the exact opposite of what is reported in the Times. Our mothers make sure that our children are not freethinkers. They raise them through stories and song to revere the words and teachings of their ancestors and of their gedolim today. They are the true guardians of Klal Yisroel down below, doing the will of the One Above in standing firm and unyielding to the winds of change and fashion. And for that we take a moment to thank them for the past and to give them chizuk for a new year of Yiddishe mamma at her best.