The Rosh Yeshiva, the Prime Minister and the Mufti 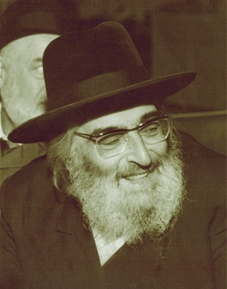 A largely unnoticed historic event occurred last week. On Wednesday, October 21st, Prime Minister Binyomin Netanyahu, speaking to a group of visiting Jewish leaders, made what seemed to many an outrageous statement. He asserted that in November 1941, two months before the notorious Wannsee Conference planning the annihilation of the Jewish people, Haj Amin al-Husseini, the Grand Mufti of Jerusalem, played a â€œcentral role in fomenting the final solutionâ€ by persuading Hitler to destroy the Jews. He further claimed that â€œHitler didn't want to exterminate the Jews at the time; he wanted to expel them. Haj Amin al-Husseini went to Hitler and said, â€˜If you expel them, they'll all come here.' Hitler then asked, â€˜So what should I do with them?' The Mufti answered, â€˜Burn them.'â€

Netanyahu was, of course, not interested in delivering a history lesson. His point clearly was, as he later explained, “to show that the forefathers of the Palestinian nation, without a country and without the so-called occupation, without land and without settlements, even then aspired to systematic incitement to exterminate the Jews.”

Despite Netanyahu’s later interpretations, a firestorm of deprecation and rebuke came down upon his startled head. Collete Avital, head of an umbrella group for survivors, said that “survivors were baffled,” since their “ancestors were killed months before Hitler and the Mufti even met” (Newsday, October 22, page A47).

Saeb Ekrat, chief Palestinian negotiator, claimed that Netanyahu “is willing to absolve the most notorious war criminal in history,” and even Netanyahu’s own defense minister, Moshe Ya’alon, “questioned the statements.” A headline in the Forward called his words “a defense of Hitler” and, to add insult to injury, German chancellor Angela Merkel told Reuters that “the Nazi regime bore sole responsibility for the atrocities it perpetrated.”

For Torah Jews, the historic event is not so much the Israeli prime minister’s distressing diplomatic predicament. It is that he echoed words uttered and written by my rebbi, Rav Yitzchok Hutner zt”l, almost 40 years ago. First presented to a gathering of about one hundred menahalim and later published in The Jewish Observer in October 1977, the rosh yeshiva’s shiur about Churban Europa was immediately considered seminal, original and extremely controversial. It elicited so many questions, many concerning his statement about the Mufti, that the rosh yeshiva asked me, as one of the two who had prepared the original English translation (along with Rabbi Chaim Feuerman) to publish a chazarah on the shiur which would respond to the avalanche of queries and criticism. This, too, was later published in the JO in January 1978 and later in book form in A Path Through the Ashes in 1986.

These bibliographical facts are important because they establish that the rosh yeshiva zt”l presciently spoke of the important coalition between Hitler and the Mufti almost four decades ago. Its significance and the bitter sensitivity it engenders have clearly not waned. Ironically, although the rosh yeshiva had sharp castigation for the early secular Zionists, 40 years later, the prime minister of Israel repeated his words almost verbatim and received almost identical condemnation from similar circles.

Let us therefore review what the rosh yeshiva taught us and why it is so crucial at this time in our history. Chazal tell us that it takes 40 years to understand what one’s rebbi has taught and it is only 38, so I do not yet profess to understand everything he said at the time. However, I am now in a position to share some of the insights he shared with me as I sat before him for seven consecutive hours, struggling to render his words into English with some semblance of the power, poetry and towering daas Torah he was revealing.

After teaching us to use the words Churban Europa, reflecting the time-honored term for all Jewish suffering, instead of Holocaust and Shoah, which isolate this tragedy from the rest of Jewish history, a semantic change that has taken hold in many Torah circles ever since, the rosh yeshiva proceeded to define what was unique about this particular churban. He explained that until World War II, Jewish suffering had been perpetrated either by the Eisav nations of the West or the Yishmoel countries of the East. Only with the alliance between Hitler and the Mufti were Eisav and Yishmoel united in the “oldest hatred,” as it has been called, anti-Semitism.

The rosh yeshiva’s far-seeing eyes recognized the maaseh avos siman labonim nascence of this alliance in the posuk, “And Eisav went to Yishmoel and took Machlas, the daughter of Yishmoel, for a wife” (Bereishis 28:9). He perceived Hitler and the Mufti conspiring against Klal Yisroel as another fulfillment of this passage, and Yassir Arafat, threatening holster on his belt, receiving a standing ovation from nations of the East and West in the United Nations as another.

When I had the privilege of reviewing all this with the rosh yeshiva for the chazarah shiur in the JO and ArtScroll book, he stressed to me that he had heard from ziknei Yerushalayim that they clearly remembered a time when they “had cordial relations with the Mufti” (A Path Through the Ashes, page 51). As we explained there, the rosh yeshiva’s words “in no way exonerate, by one iota, the culpability of the Germans themselves. The Nazis surely needed no instructions in anti-Semitism nor outside motivation for their evil plans” (ibid., page 50, note 4).

Perhaps had Mr. Netanyahu read these portentous words, he could have avoided some of the stinging criticism he has suffered. Yet, he does seem to have stumbled upon a staggering truth about recent Jewish history that is tragically playing out before our very eyes on a daily basis. Instead of exonerating anyone, the rosh yeshiva’s teaching (and the prime minister’s discovery of the facts) points to the moment in history when Eisav joins Yishmoel and becomes virtually indistinguishable from him. No longer are we confronted by a single enemy. We now must think in terms of particeps criminis – alliances, coalitions, strange partnerships and ancient marriages. Sadly, woefully, we can no longer rely upon anyone but Hashem for help or solace.

Yet, in the end, this is surely both for the best and part of the Divine plan. As the Gemara says at the end of Maseches Sotah, there will come a time when “ain lanu lehisha’ein ela al Avinu Shebashomayim – we have no one to turn to but our Heavenly Father.”

Only one pundit seemed to “get it.” Seth Lipsky, writing in the New York Post on October 25th, using published notes from Hitler’s translator, concludes that “the key point is that the Nazis and the Palestinian Arab leader were on the same side. People had to make a choice in World War II. The Jews went with the Free World. The Palestinian Arabs went with Hitler. Surely that is the prime minister’s intended point. No doubt he seeks awareness of the fact that Israel is still being attacked by the heirs to a devil’s pact between the mufti and the Fuhrer.”

More importantly, Lipsky demonstrates how the left, as led by the New York Times, are uncomfortable with all this because they want to believe a different narrative. The Times’ Friday editorial called Netanyahu’s comments “outrageous” because “[it] gives the impression” that the Palestinian Arabs’ “resistance is based solely upon a longstanding hatred of the Jews, and not on their occupation by Israel or any other grievance.”

Well, actually, Grey Lady, well said, even if you didn’t mean it that way. It isn’t anything we’ve done. It is who we are. This brings us back to Yishmoel parroting Eisav’s mantra, “Eisav sonei l’Yaakov – Eisav hates Yaakov” (see Rashi, Bereishis 33:4), and nothing we do will change that animosity. But the real question is, when and why did Yishmoel inherit Eisav’s sword, now that we are literally dealing with the knives of Yishmoel?

I believe that a recent sefer has it right. Just three years ago, Rav Menachem Mendel Pomerantz, rosh yeshiva of Yeshivas Be’er Yisroel, published Achishena, a work about Golus Yishmoel and Acharis Hayomim. At the very end (page 458), he raises this momentous question: How did Yishmoel inherit what once belonged to Eisav and how should we deal with it?

His answer affects us all. The Medrash (Bereishis Rabbah 65:20) teaches, based upon the posuk of “hakol kol Yaakov vehayodayim yedei Eisav,” that when the sounds of Torah will reverberate in the botei knesses and botei medrash, the hands and swords of Eisav will be powerless against us. Rav Pomerantz suggests that, boruch Hashem, with the explosion of the kol Torah in the world, we have, in fact, rendered Eisav ineffectual and no longer the threat he used to be. But Yishmoel, on the other hand, did not receive his sword as a parental gift. He was promised that yado bakol, meaning that he would have a hand in everything, even when his mechutan, Eisav, has been marginalized.

So what is there to do in this situation? Rav Pomerantz quotes the Gemara which says, “What should a person do to be saved from the terrifying days before Moshiach? He should learn Torah and engage in acts of kindness” (Sanhedrin 98b). The chiddush here is that although Yishmoel is not as directly correlated to our spiritual state as Eisav, nevertheless, it is Eisav’s sword that they are wielding, and for that weapon we have been given an eternal antidote. If we could all find it within ourselves to increase our Torah learning and acts of chesed, neither Eisav nor Yishmoel would be able to harm a single Jew and we would soon welcome Moshiach speedily in our days.