The Murdered Boys- Time for the Tough Questions 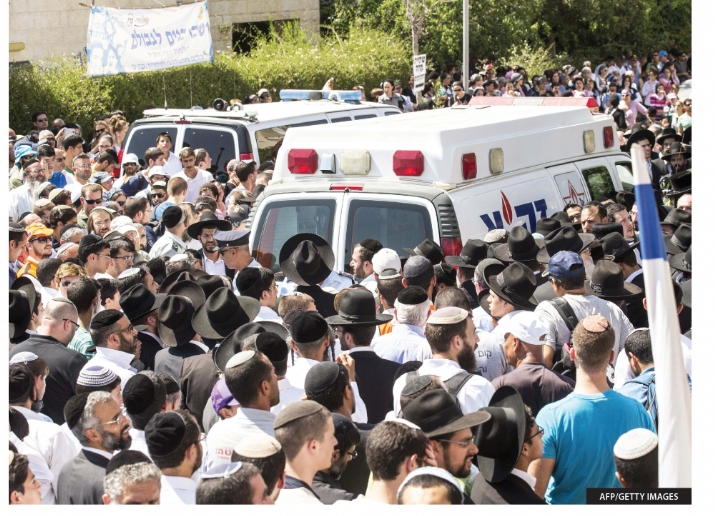 Why was it the Shin Bet that discovered that one of the kidnapped boys had phoned the police? Was razing the murderers' homes a wise move? Will the murders lead to an escalation of the violence? Why did the army prevent a group of hiking students, who were intimately familiar with the area, from participating in the searches? And was it that same group of students who ultimately found the bodies?

On Monday evening, I entered the Knesset plenum to ask one of the Knesset members a question. He seemed to think that I wanted to tell him something associated with the day’s business, and he said, “The session is about to end,” a statement that I found rather peculiar.

“Why are we ending the session?” I asked him.

He gave me a strange look. “You didn’t hear? They found the bodies!”

The secret that no one knew, not even Israel’s determined news reporters, traveled through the Knesset plenum by word of mouth. MK Yariv Levin, close confidant of the prime minister, and one of the coalition leaders, was waiting for the official announcement that the bodies had been found before he would approach the Knesset Speaker to ask him to close the session. That piece of news, of course, overrode all of the Knesset’s business that day. But for some reason, the official announcement did not come.

The session was brought to a close anyway, albeit not because of the murders. Unbelievably, the Knesset closed because of Ramadan, the Muslim holiday! Even at the beginning of the session, the Knesset Speaker had announced that it would be closed for a short time at 7:30 pm, so that the Muslim Knesset members who were fasting could eat their Ramadan meal. At 7:30, the Speaker announced a recess until 8:15. The assumption was that the official news would arrive by then.

At 8:10, we joined the Knesset Speaker, Yuli Edelstein, for Maariv in the Knesset shul. I davened for the amud and noted that the minyan was attended by many legislators, even Mickey Levy of Yesh Atid, the deputy finance minister. There was an atmosphere of despondence. A number of the lawmakers were wiping away tears. Some of the MKs from the Bayit Yehudi party are even personally acquainted with the families of the boys.

Last Wednesday, the mothers of the three boys appeared in the Knesset. They came to receive encouragement and support, but they themselves inspired us and bolstered our spirits. Members from every party participated in the meeting, some being so emotionally overwhelmed, they couldn’t speak.

The news began to spread, albeit unofficially. The various news outlets began broadcasting updates hinting at the boys’ bitter end. The news was filled with large block letters proclaiming, “Kidnapped Boys Feared Dead.” The official announcement that the bodies had been found came while we were davening. After davening, at 8:30, the Knesset Speaker resumed the session by announcing, “Members of the Knesset, I am reopening the session with great anguish. We have just received the official word that the episode of the kidnappings has reached a bitter end. All of our hearts are with the families. We hope for better news in the future.”

That was when the political infighting began. The cabinet, which convened on Monday night, immediately after the official announcement, declared, “Hamas will pay.” Within the cabinet, though, there were bitter disagreements. The political right demanded that Hamas be crushed. “We must strike the terrorists mercilessly,” Uri Ariel declared. Bennett also announced that it was time to take action. The left, meanwhile, demanded restraint. Science Minister Yaakov Peri, a member of the cabinet and onetime head of the Shin Bet, said simply, “Abu Mazen must dissociate from the murderous Hamas organization.”

An editorial in Haaretz has already reached its own conclusion: “The prime minister must halt the military and political gallop toward action and be satisfied with the messages that have already been conveyed. Two major operations, Cast Lead and Pillar of Defense, have already shown the leadership of Hamas and the citizens of Israel that the effects of a military operation last only for a limited time.”

Hamas itself, in fact, has already expressed almost the same idea. In response to the prime minister’s warning that an act of terror would evoke a “severe response,” Hamas warned Israel to refrain from using the abductions as a pretext to destroy the terror organization’s infrastructure. Even Abu Mazen, who spoke as Israel expected of him — although speaking was about all he did — made a similar statement. The message was clear: Do not use a criminal act as a justification for criminal acts of your own. Criminal, that is, in Palestinian eyes.

Take, for instance, the issue of demolishing the homes of the murderers. This is a punitive step that Israel has been using for years: razing the home of a murderer. For most people in the world, their homes are the closest thing to their hearts, but in the Arab mentality, a home is much more than that. The terrorists’ families hurried to Givat Ram and appealed to the justices of Israel’s Supreme Court to prohibit the government from destroying their homes. And the question was already far from theoretical. Tuesday morning the Supreme Court debated whether to accept the Awad family’s appeal against the destruction of its home. Ziad Awad, a member of the family, the terrorist who murdered Deputy Police Commissioner Baruch Mizrachi on erev Pesach. He was arrested, and the army decided to demolish his home, as well as the adjacent home of his brother-in-law. Awad was released from prison in the Shalit prisoner exchange. This afternoon, the court rejected the family’s appeal.

Is the punitive measure of destroying a house effective? In all likelihood, it is. But is it ethical? That is the subject of considerable debate. Some maintain that the destruction of a house is likely to drive one of its occupants to seek revenge. Furthermore, what is the logic in destroying a house, other than avenging a criminal act? Should a country be allowed to engage in vengeance? Is revenge a just policy? A “very senior official,” as the news reports are wont to call him, explained the reasoning behind the policy to the subcommittee of the Knesset Committee for Foreign Affairs and Defense: There have been many documented cases in which the members of a terrorist’s family supplied the intelligence services with crucial information before their relative could carry out an attack, in order to prevent themselves from being viewed as accomplices and to avert the destruction of their homes. The demolition of a terrorist’s home, then, is more than just an act of revenge; it is an important step toward protecting the country’s security.

Will the murders of the three boys result in an escalation of the conflict and ignite further violence? Is it possible that the opposite may take place, and that Israel may decide to engage in more extensive dialogue and speed up the negotiations? Moshe (Misha) Arens, a former Minister of Defense and Foreign Minister for the Begin and Shamir administrations (and before that, in 1982, the Israeli ambassador to Washington), has already begun talking about appeasing the Arab populace. According to Arens, our task right now is to win the favor of the Palestinians. And if that is his sentiment, then what could the left wing be saying?

No one denies that there were many blunders that took place after the abductions. Even if we ignore the stream of “information” from the professional news reporters who know even about things that never actually occurred, legitimate questions fester like open wounds. One of the most well-founded rumors has it that the police did not simply delay transferring information to the Shin Bet from the phone call made by one of the boys to the emergency dispatcher; rather, they actually ignored the call altogether. It was only when the Shin Bet later checked the movements of the boys’ cell phones, after their families notified the authorities that they had disappeared, that it was discovered that a call had been made to the police. The Shin Bet itself then contacted the police and asked them to locate the records of that call. It has also been determined that the sound of gunshots was heard during the call, leading to the conclusion that as soon as they realized that one of the boys had called the police, the kidnappers decided to murder the boys and dispose of their bodies immediately, fearing that the police were on their trail. Was their original intention to keep the boys? No one knows! But this is clearly far more than merely a case of police negligence. It is no wonder that several members of the police force, including high-ranking officials, have already been severely reprimanded and punished. Some of them have even been informed that the future of their careers in the police force is in question.

By now, it has become clear that the terrorists killed the boys while they were still in the car and then hurried to find somewhere to hide the bodies. They dug a shallow pit, dumped the bodies, and covered it with rocks and shrubbery. The search parties that converged on the area in recent days included five civilian guides from a hiking school in Kfar Etzion, soldiers, and experienced trackers. A member of the school faculty related, “We separated into groups and began combing through pits, caves, and structures in the area. The entire place was desolate. Suddenly, one of our group noticed some shrubs that did not seem to fit in. They were half green and half brown, and they seemed to have been uprooted from the ground. It looked strange to us. Moving the shrubs aside, he found a pile of stones underneath. The bodies were beneath those stones.

The army rejected the school’s offer of assistance during the initial days of the search. Was that a mistake? And did they actually beg to be included in the search, as has been reported? There is certainly truth to the reasoning that they are intimately familiar with every boulder and crevice in the area, and they were likely to be the most capable of figuring out where the terrorists would have brought the boys. Were they, in fact, the ones who ultimately found the bodies? Did the IDF soldiers pass by the spot and simply not notice the signs of the grave; signs that later lit a red light in the eyes of the students and counselors from the school?

The answers to some of these questions may never be known.