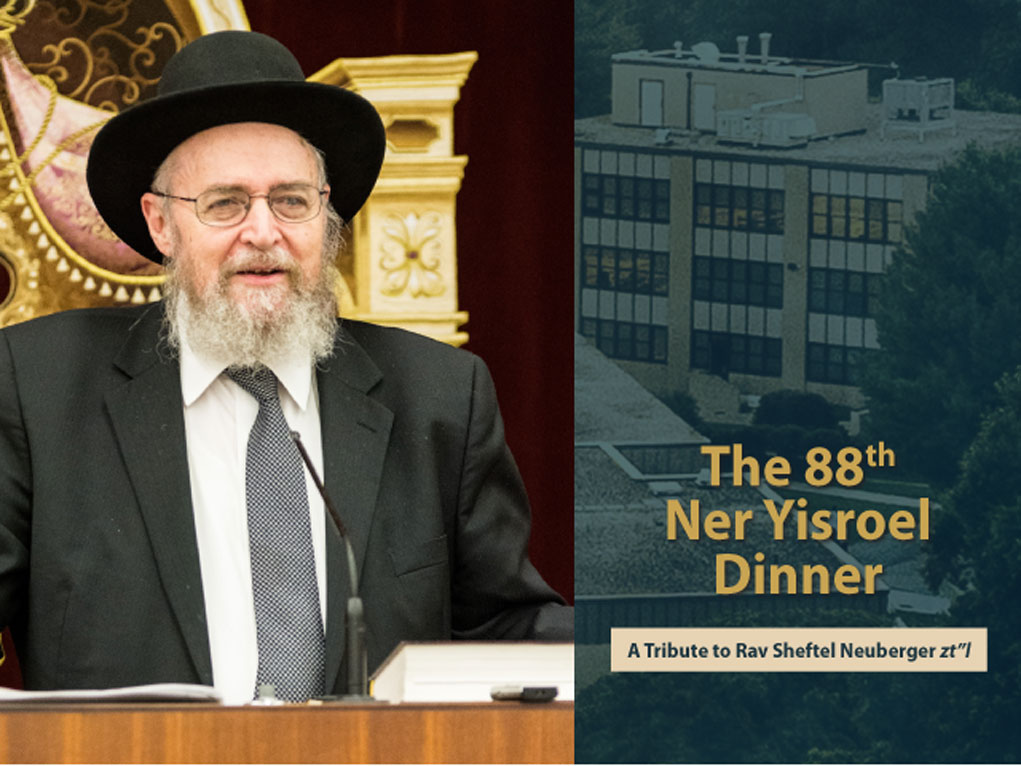 Ner Yisroel of Baltimore, founded in 1933 by Rav Yaakov Yitzchok Ruderman, was established to transplant Torah from the great strongholds of European yeshivos on American soil. For eighty-eight years, the yeshiva has molded and strengthened talmidim, imbuing them with dedication to Torah study and communal leadership.

On Sunday, January 9th, Ner Yisroel held their annual dinner. One of the more unique aspects of this year’s dinner was that it took place on the yeshiva campus rather than in a hotel. Over the years, yeshiva alumni have expressed that there is nothing quite as strengthening as coming back to yeshiva, walking the same halls, speaking to their rabbeim, and sitting in the same bais medrash.

“Dinner in a hotel is great,” they said, “but nothing replicates sitting in the old bais medrash.”

That cinched the decision of changing the venue. Ner Yisroel arranged for two large tents to be set up on the yeshiva campus. One tent was to augment the yeshiva’s new dining room. The other even larger tent was to house the beautiful video presentation about Rav Sheftel Neuberger and the siyum haShas l’ilui nishmaso.

The gala event took place in two parts, the first part centered on accommodating the many talmidim who traveled to Baltimore from across the United States. In recognition of their investment of time and effort, Ner Yisroel arranged a comprehensive program starting at noon with a sumptuous lunch, followed by a Yarchei Kallah. Alumni were given marei mekomos by rabbeim, and they eagerly filed into the bais medrash and learned passionately with arranged chavrusos. After the seder, Rav Tzvi Einstadter gave an in-depth shiur attended by over four hundred people.

Divrei pesicha were delivered by Rav Berel Weisbord, mashgiach of Ner Yisroel. The yeshiva then offered an “Oneg Shabbos”, a throwback to the alumni’s yeshiva days. On Friday nights in yeshiva, talmidim go to their rabbeim’s homes to eat, sing, and schmooze about important life issues. This past Sunday, Ner Yisroel wanted to recreate that special atmosphere.

Rav Yissochor Frand, Rav Tzvi Berkowitz, and Rav Shraga Neuberger sat at a table, and many seats were placed around them. Rav Yaakov Robinson, alumnus and rov in Chicago, was the emcee, using questions he had prepared as springboards for discussing certain hashkafic topics.

Rav Shraga Neuberger discussed the history of the yeshiva and its fundamental principles. Rav Tzvi Berkowitz expounded on how a ben Torah can maintain his connection to Torah after leaving the yeshiva. Rabbi Frand explored the idea of achrayus that a person must take as a member of the yeshiva and of Klal Yisroel. “Wherever you find yourself,” he stressed, “you have the opportunity to help the klal in general and specifically your yeshiva, as well.”

The two-hour dinner, set up in the newly renovated dining room and connecting tent, created a warm atmosphere of opportunity where alumni caught up with their chaverim and rabbeim, many of whom they hadn’t seen for years. There were 1,300 people in attendance.

After the dinner, the rosh yeshiva, Rav Aharon Feldman, gave divrei brocha and chizuk. Rav Yosef Goldfeder, dinner chairman, introduced the tribute video dedicated to Rebbetzin Aviva Weisbord, wife of Rav Berel Weisbord and daughter of Rav Yaakov Weinberg. Rebbetzin Weisbord supported and assisted her husband in all his endeavors, with a ready smile and unflagging energy. She was deeply involved in many communal associations, bringing Baltimore to a higher level of chesed and caring. One of her many passions was providing support for children with learning differences through her position as executive director of the Shemesh organization. She was a treasured friend, prolific speaker, and community advocate. Rav Yosef then introduced the tribute video for Rav Sheftel. Both videos were uplifting and inspiring.

Rav Boruch Neuberger, son of Rav Sheftel, addressed the audience, followed by the Siyum Hashas, a summit of this memorable evening. Past and present talmidim of the yeshiva from all over the world had divided dapim of Shas in memory of Rav Sheftel. Rav Yosef Neuberger, segan menahel of the mechinah and one of Rav Sheftel’s sons, made the siyum. Music, singing, and dancing rounded off the spectacular evening along with a sumptuous Viennese table.

While the roshei yeshiva represented the brain of the yeshiva, Rav Sheftel was the lev. He was a ba’al regesh and a ba’al ruach. When Rav Aharon Feldman delivered his hesped for Rav Sheftel, he cried, “Eich naflu hagiborim?!”

Tall and broad, with a pleasing appearance, Rav Sheftel had presence. He walked into a room, and the room revolved around him. He was unique, larger than life, a powerful force. A tremendous talmid chochom, one of his many talents was his ability to speak with anyone on any level. He could confer with a rosh yeshiva, a businessman, or an elementary school child about what he had learned that day, treating each of them with tremendous respect.

Rav Sheftel was the shliach tzibbur for the yeshiva, and he used his koach haniggun for decades. To experience the Yomim Noraim without Rav Sheftel was very difficult for the talmidim. He lained the megillah and was honored with brocha acharita at every talmid’s wedding.

Rav Sheftel was the link in transmitting the mesorah of the yeshiva. Over the years, he gave over Torah and hadrocha from the preceding gedolim of Ner Yisroel, eminent Torah luminaries. Rav Yaakov Yitzchok Ruderman, Rav Yaakov Weinberg, Rav Dovid Kornglass and Rav Yaakov Kulefsky. Four towering individuals, each possessing very different strengths in Torah, yet Rav Sheftel managed to convey the essence of each one of them, engraving their legacies in the hearts of the next generation.

As menahel, Rav Sheftel was responsible for the maintenance and function of the yeshiva. His father, Rabbi Herman Neuberger, held the same position. Before joining his father in administration, Rav Sheftel was a rebbi in Ner Yisroel’s high school for many years. Sensing the need to ensure the administration’s continuity, he shifted his position.

Commitment to his talmidim was his driving force, notwithstanding the exhausting schedule his travels entailed. Often, after a fundraising trip, he would take a redeye flight back to Baltimore. Yet, within hours of his return, he would appear at a bar mitzvah, levaya, or shiva house.

“You’re stretching yourself too thin,” he was often told.

“When a talmid of the yeshiva is in need and my presence will help, then I’m going,” he said.

Nothing was ever too much when it came to a talmid, even if oceans separated them. Rav Sheftel’s father had helped many Iranian Jews come to America, and the yeshiva welcomed many of these students. Thus, Ner Yisroel had a longstanding relationship with the Persian community. A talmid of the yeshiva, Rav Yosef Chaim Shemtov, decided to open a kollel in Tehran. But getting semicha for his yungeleit presented a problem. He called Rav Sheftel, and Rav Sheftel formulated a plan which he quickly implemented. He worked hard to create written bechinos for semicha, and he signed them. He then planned a trip to Tehran to show these yungeleit that they mattered. For reasons beyond his control, he was unable to complete the trip.

Relating to everyone with affection and respect was a hallmark of Rav Sheftel’s unique persona. Rav Sheftel was once on a plane with his son, Rav Boruch. The moment the plane took off, Rav Sheftel opened a Gemara and began learning. Turning to Rav Boruch, he posed a question, and they began talking in learning with a lively give and take. After a few minutes, a man across the aisle said, “I couldn’t help but overhear that you’re studying the Talmud.” This man was the head of economics in a state university of New York, and he started asking Rav Sheftel about the Talmud. With incredible ease, Rav Sheftel shifted his manner and began speaking with this man in a way that he could understand.

This was a classic depiction of Rav Sheftel. One minute he was arguing with his son about a Tosefos, and the next minute he was speaking with a stranger about the Talmud in a way that was relatable and straightforward.

Yes, he was a fundraiser, but first and foremost, his essence was Torah. He was always discussing a vort or a shtickel Torah on his way to and from his frequent trips. He assumed the responsibility for the yeshiva because he knew he had the kochos to do the job. But it was always about limud Torah.

With his passing, Rav Boruch Neuberger stepped into his role as menahel of the yeshiva, the chut hameshulash for this bastion of Torah.

Ner Yisroel’s 82nd dinner was a phenomenal success. Over three hundred alumni volunteered to help the yeshiva reach the goal of raising five million dollars for their fundraising campaign, a testimony to their depth of dedication and appreciation for the Torah institution that molded them.

The yeshiva is entering a new era with increased energy, enthusiasm, and determination. Its influence in Baltimore and around the world is manifest with hundreds of students involved in leadership positions. The large turnout for the dinner demonstrated the community’s esteem for the yeshiva and all that it represents. May it continue to grow l’hagdil Torah ul’ha’adirah.