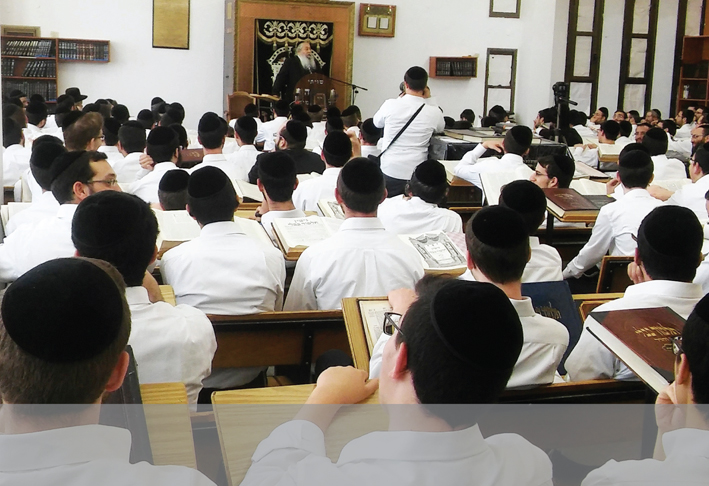 The sad news spread around Eretz Yisroel last week with lightning speed: “Reb Moishe” is very sick. Some call him “Reb Maishke,” but it makes no difference: They are referring to Rav Moshe Chodosh, the rosh yeshiva of Ohr Elchonon and the man who effectively established a Torah empire, with a yeshiva gedolah in the Romema neighborhood of Yerushalayim, a yeshiva ketanah (for younger boys) in Givat Shaul, another yeshiva gedolah in Teveria, and one more in Rishon Letzion. Rav Moshe has been blessed with incredible success in everything he has done.

Rav Moshe is one of the most beloved and admired roshei yeshivos in Eretz Yisroel. He is a man with a regal bearing and an impressively rabbinic demeanor. He is also a fascinating conversationalist. I have never learned under him, but I have heard him deliver shiurim. And while I am not fit to be the judge of this, it is said that he is a world-class Torah genius.

I have two sons who are his talmidim. One of them learned in his yeshiva ketanah in Givat Shaul and is now a talmid at Yeshivas Mir of Modiin Illit; the other is approaching the end of his three-year stint in Rav Moshe’s yeshiva. I can personally attest that the faculty of this yeshiva understands what it means to invest major efforts in their bochurim. The rosh yeshiva is Rav Moshe Bunim Krauss, one of the most prominent talmidim of Rav Moshe Shmuel Shapiro zt”l. The mashgiach is Rav Mordechai Fisch (a son of Rav Moshe Fisch zt”l, the father of the kiruv movement in South America), one of the most prominent mechanchim in Eretz Yisroel. The entire faculty was picked by Rav Moshe Chodosh, and the rabbeim are, without exception, extraordinarily dedicated to their talmidim. As a result, the yeshiva has achieved extraordinary success. And no one has the slightest doubt as to the most unique aspect of the yeshiva: its distinguished leader, Rav Moshe Chodosh himself.

Every summer, a siyum is celebrated at the yeshiva before the beginning of bein hazemanim. Naturally, this siyum takes place during the Three Weeks, sometimes immediately before Tishah B’Av. At the siyum, the main address is delivered by Rav Moshe, who comes to honor the young talmidim for their accomplishments. Every year, he remarks, almost as an afterthought, “You must certainly be surprised by the fact that we are serving chicken at this siyum in the middle of the Nine Days. Let it be known that we are not denigrating the halachos of the Nine Days, chas veshalom. Rather, we are being machmir on the halachos of a siyum and showing kavod to the talmidim and to the Torah.”

As I noted, rumors began to spread last week about Rav Moshe’s illness and the news quickly became the focus of public attention. The questions abounded: What does he have? Is the situation dire? Is it very severe? The Chodosh family decided not to try to hide the situation. Instead, they released a statement: “The tzibbur is asked to daven and to arouse great Heavenly mercy for the recovery of Hagaon Rav Moshe Mordechai ben Tzivia Leah, among the rest of the cholim of Bnei Yisroel.”

The family’s announcement put an end to the whispered speculation, but it also heightened the public’s sense of worry. And then there were the public tefillos that were held: in a shul in Bnei Brak, at the Kosel, and in every branch of Yeshivas Ohr Elchonon. Without question, the Torah world has been plunged into apprehension.

On Sunday night, I made my way to Hadassah Ein Kerem hospital, after learning on Erev Shabbos that Rav Moshe had been transferred there from Shaarei Tzedek and that he was to begin a series of treatments on Sunday. When I arrived at Machon Sharrett, I found Rav Moshe’s son emerging from the elevator, accompanied by a group of youths, presumably the rosh yeshiva’s grandchildren.

Unsure of where the rosh yeshiva had been hospitalized, I walked along the corridor, reading the daunting signs. I found myself passing the Hematology Department, then Oncology, and then Outpatient Services. Every floor came with its own unique set of woes. But where was the rosh yeshiva? Should I go from ward to ward to search for him? I called my friend, Rav Dovid Weingarten of Darchei Miriam. He and his brother, along with the organization’s volunteers, visit many hospitals every day and are constantly equipped with information about anyone who is hospitalized, where they can be found, and even the details of their conditions.

Indeed, Reb Dovid put an end to my search. “The rosh yeshiva is in the hematology ward,” he said. “It’s on the second floor, and he is in Room 3.”

I made my way to the designated room, but as I was about to cross the threshold, I drew back. It isn’t that I am hesitant to encounter people who are ill. On the contrary, I know how to turn an atmosphere of despondence into one that is pleasant; I know how to tell stories that can make a sick person forget his woes for just a few moments. But this time, I felt that I would fail, and instead of being a source of encouragement, I myself would burst into tears. Here was a man whom I admire so greatly and I was terribly saddened by his condition.

I am well aware that Hashem’s salvation can come in the blink of an eye. I know of plenty of stories, some of them from firsthand accounts, of people who have survived such dreadful illnesses. The road to recovery is a difficult one, filled with suffering and fear, but it is possible – although it takes a tremendous amount of determination and emotional strength.

I returned home without entering the rosh yeshiva’s room.

The very next morning, I received a telephone call from the mashgiach of Ohr Elchonon, informing me that the rosh yeshiva would be delivering a shiur klali at 12:15. I found it almost impossible to believe, but I also knew that the mashgiach is a serious man. He did not indulge in a lengthy conversation. By the time I had recovered my wits, he had ended the call. At 12:13, I arrived at the yeshiva.

I waited outside the building to witness the rosh yeshiva’s arrival. I stood there for a long time, along with dozens of bochurim and yungeleit from the yeshiva, as well as many former talmidim. We all waited anxiously to see him and to greet him, although we were asked not to shake his hand. He was scheduled to be placed in isolation the following day, Tuesday, and he was forbidden to be exposed to any possible infection.

Suddenly, someone shouted, “The rosh yeshiva is in his house!” He was making his way to the bais medrash from his apartment, one flight up. We all hurried upstairs, where I waited at the end of the corridor leading from his home to the bais medrash. We were actually in the yeshiva dormitory. There was silence in the air; no one spoke. Every one of us seemed to be alone with his thoughts. And then he arrived. He was accompanied by several talmidim, as well as by Rav Mordechai Fisch and Rav Eliav Miller, the head of the mechinah of Ohr Elchonon and the chairman of Lev Shomea. Rav Moshe was his usual regal, radiant self. “Oh!” he exclaimed when he caught sight of me. “You are here, too?” I nodded in deference, keeping my hands at my side. “I was told not to shake hands,” I said.

He continued on his way to the bais medrash. It took him a long time. He greeted everyone he saw, which amounted to hundreds of men and boys. It took him a long time to make his way to the mizrach and the aron kodesh. I watched as he kissed the paroches, and it seemed to me that there were tears in his eyes. He removed his hat and began speaking, getting directly to the point.

“You all know the situation,” he said. “I am in the hospital. I asked to be allowed to come here to deliver the shiur pesichah as I do at the beginning of every zeman. I was supposed to have delivered this shiur several days ago. I received special permission to leave the hospital, but I must return right away. I am beginning treatments tomorrow.”

“It was very important to me to come and deliver this shiur,” he said. “I want to say some things that are not very well-known, things that it is important to me for you to hear. I hope that this time, my words will be absorbed even more than usual.” He was referring to the chiddushim he had developed on the sugya being learned in the yeshiva. The rosh yeshiva felt that, in light of the extraordinary effort he had invested in producing those chiddushim, it was only fitting that his listeners would likewise exert themselves to understand them.

“That is one reason,” he continued. “But another reason I came here is that I missed you. I wanted to see everyone and to thank you. I have heard, boruch Hashem, that the tzibbur is involved in chizuk. In fact, I can almost understand the reason for what is happening to me: for the purpose of creating that chizuk. That makes it all worthwhile.”

I found his words distinctly chilling. If his illness motivated his listeners to better themselves, then his suffering was “worthwhile.” What an extraordinary sentiment!

Indeed, all the bnei Torah of Eretz Yisroel have been davening for Rav Moshe Mordechai ben Tzivia Leah to be blessed with a refuah sheleimah. In the botei medrash of Ohr Elchonon throughout the country, Tehillim has been said for many nights and the bochurim have learned for hours on end, taking on fasts, taaniyos dibbur, and other commitments. And Rav Moshe Chodosh, the father figure to all these talmidim, said that all of this makes his tribulations – the fear, the pain, the suffering, the chemotherapy and radiation treatments, and all the needles and injections – worthwhile.

“Be’ezras Hashem,” Rav Moshe continued, “it will all be over soon. I have pinned great hopes on the chizuk of the tzibbur, and with Hashem’s help, we will be successful.” And with that, he began his analysis of the sugya.