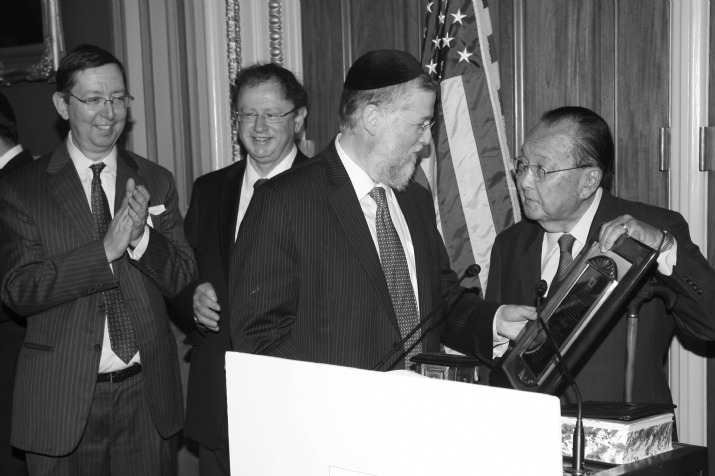 The most senior US senator, Daniel Inouye, a staunch Israel advocate and dear friend of the Jewish people, passed away Monday at the age of 88. Inouye, a highly decorated World War II veteran, was one of the most powerful Democrats in Washington. He was the second-longest-serving senator in history. For years he stood by Israel's side. His latest achievement was to successfully push for funding for the Iron Dome missile defense system, which earned its keep during Operation Pillar of Defense.
AIPAC published a message mourning Inouye’s passing, describing him as “an extraordinary American patriot and hero who deeply understood the importance of the US-Israel relationship, and as chairman of the Appropriations Committee, worked tirelessly and effectively to ensure that America’s ally, Israel, had the necessary resources to defend her people.”

Israeli’s US Ambassador Michael Oren remarked, “When he was still a soldier, recovering from the loss of an arm in combat, Senator Inouye learned about the Holocaust and began a lifelong attachment to the Jewish people and, later, to Israel. His dedication to Israel’s security was unswerving.”

Oren spoke to Inouye’s role in Israel’s security: “Our people owe him an immense historic debt. The Iron Dome system that recently intercepted hundreds of terrorist rockets aimed at our homes stands as enduring proof of his commitment to the defense of the Jewish State.”

Various askonim described the remarkable character of Inouye, who assisted Jewish institutions and showed great friendship toward the Jewish community.

Rabbi Mordechai Wolmark, rosh yeshiva of Yeshiva Shaarei Torah in Monsey, spoke to the Yated about the close relationship that his father-in-law, the legendary philanthropist, Mr. Zev Wolfson, shared with the Hawaiian senator.

“He worked with my father-in-law on behalf of Yiddishe mosdos all over the world, including in France and in Russia. He lobbied presidents for funds for frum institutions. He was certainly meichasidei umos ha’olam and a true oheiv Yisroel,” said Rabbi Wolmark. “He was a humble, simple person, with a genuine sense of values.”

Inouye’s efforts transformed Jewish schools and organizations across the globe, including Neve Yerushalayim, which enjoyed the senator’s staunch support.

Abe Biderman, the noted askan and leader of Shuvu, in conversation with the Yated on Tuesday, was effusive in his praise for Inouye.

“He was a real friend of the Jewish community,” said Mr. Biderman. “He didn’t do what he did for any political gain.”

Following World War II, Inouye was greatly influenced by a Jewish roommate of his.

“He mentioned that he was so impressed by the Jewish religion that he would have converted, except that it would have been too difficult for his mother had he done so,” said Mr. Biderman. “His number one supporter was Mr. Zev Wolfson, with whom he worked so that Israel would be the beneficiary of hundreds of millions of dollars from the US government. Because seniority is so important in the Senate, Inouye was in position to do more and more for Israel. He was singlehandedly responsible for billions of dollars that went to Israel, much of it thanks to his decades-long relationship with Mr. Wolfson.”

After the Persian Gulf War, a tremendous amount of equipment remained in the countries surrounding Iraq. “The senator lobbied for the military equipment – literally billions of dollars’ worth – to be transferred to Israel,” related Mr. Biderman. “He never got credit for it; that’s the way he conducted himself all his life. He was humble and quiet, and engaged in helping others without fanfare.”

Mr. Biderman, who met the senator several times, related that an award was presented to Inouye on behalf of the Jewish community in appreciation of his altruism and support throughout his years of public service.

The Agudas Yisroel said that, “Throughout his long and distinguished career in the U.S. Senate, Inouye showed many times his deep care for the wellbeing of the Jewish people in the US, Israel and across the globe. Our community worked closely with him, and benefited greatly from the relationship. His commitment was a matter of personal conviction, not political expediency. He was a true friend.

The Young Israel said, “Senator Inouye was one of Israel’s best friends in the Senate and was resolute in his belief that it is in America’s best interests to maintain an unbreakable bond with the Jewish State. His connection to Israel was enduring and genuine. He recognized the serious ramifications of a nuclear Iran and publically maintained that if Iran was to ever attack Israel, it would be the equivalent of a declaration of war on the United States.”

“Senator Inouye’s contributions to the well-being of Israel are legendary.”

Since 2010, Inouye had been the Senate’s president pro tempore, which put him third in the line of succession for the presidency.

He cut a singular figure in the nation’s capital when he arrived in Washington in 1959 as a representative from the newest state and the first Japanese American elected to Congress.

A methodical behind-the-scenes operator who rarely sought the spotlight, he was little known outside Hawaii and the halls of the Capitol. But his wartime record, coupled with his reputation for a bipartisan approach to politics – helped him gain respect from and influence with colleagues of both parties.

After serving in the House as Hawaii’s first congressman, he was elected to the Senate in 1962 and began a career as Hawaii’s most important patron in Washington. He was longtime chairman of the Appropriations defense subcommittee and, after 2009, of the entire Appropriations Committee.

Proudly describing himself as “the No. 1 earmarks guy in the U.S. Congress,” he was – along with his friend and political ally Ted Stevens, the late Republican senator from Alaska – one of the last unapologetic purveyors of political pork.

Inouye came to national attention only on occasion, most notably when he helped orchestrate inquiries into the Watergate scandal and the Iran-contra affair. But he was a towering personality in Hawaii, where he had been born to working-class Japanese immigrants.

He grew up planning to become a doctor. But in 1942, as a teenager barely out of high school, he joined what would become a revered Army regiment of Japanese Americans.

Two years later, on a battlefield in Italy, he destroyed three enemy machine gun nests even as bullets tore through his stomach and legs. A grenade nearly ripped off his right arm, and it was later amputated at an Army hospital.

Back home, the young lieutenant was wearing his empty right sleeve pinned to his officer’s uniform when he stepped into a San Francisco barbershop for a haircut. “We don’t serve Japs here,” the barber told him.

Memories of such encounters remained vivid to Inouye, who in his political career spoke eloquently in support of civil rights and social welfare programs.

In 1954, Inouye was part of a Democratic tide that swept Republicans – who had long run island politics and were closely aligned with the sugar interests – out of office. Hawaii has voted solidly Democratic since.

In 1973, he served on the bipartisan Senate panel that conducted investigative hearings on the Watergate scandal. The sessions introduced Inouye to the public as an undaunted questioner of top White House aides, including H.R. Haldeman and John D. Ehrlichman.

Ehrlichman’s sworn testimony prompted a rare moment of unguarded emotion from Inouye. “What a liar!” he whispered into a microphone he thought was off.

The next week, Ehrlichman’s attorney referred to Inouye as “that little Jap,” prompting a wave of thousands of telegrams and letters in support of the senator.

His widely praised performance was noticed by powerful Democrats, including Robert C. Byrd, who chose him as the first chairman of the Senate Select Committee on Intelligence, established in 1976.

Inouye was clearly a rising force in his party by 1978, when he was elected to the third-ranking leadership post among Senate Democrats. He held that position for more than a decade in the 1970s and ‘80s and appeared poised to succeed Byrd as Senate majority leader.

Daniel Ken Inouye was born September 7, 1924, in Hono­lulu. He was the oldest of four children and grew up in what he described as “respectable poverty” as his father held two jobs – file clerk by day, waiter by night – to support the family.

One of his most searing childhood memories was the Japanese attack on Pearl Harbor in December 1941. He rushed to tend to the wounded.

“Seventeen years old at the time,” he later wrote in The Washington Post, “I was filled with grief as I came to the realization that the pilots who had dropped the bombs were people who looked like me.”

The U.S. government soon declared Americans of Japanese descent “enemy agents” and sent more than 100,000 to internment camps around the American West.

In 1943, after the government allowed nisei – American citizens born of Japanese immigrants – to join the military, Inouye quit his premedical studies at the University of Hawaii to sign up with the 442nd Regimental Combat Team, made up entirely of Japanese Americans.

Inouye’s military decorations included the Distinguished Service Cross, the Bronze Star Medal the Purple Heart and the Medal of Honor.

While hospitalized for his war wounds at an Army hospital in Michigan, became friendly with a fellow patient – a gravely wounded soldier from Kansas, Bob Dole.

Inouye graduated from the University of Hawaii in 1950 and George Washington University’s law school in 1952. He entered the territorial legislature in 1955 and was elected to Congress in 1959 – one year before Dole began his own long Capitol Hill career as a representative and senator.

“I went with the Dole plan,” Inouye liked to say about his quick path to Washington politics, “and I beat him!”