Musings At The Grand Canyon 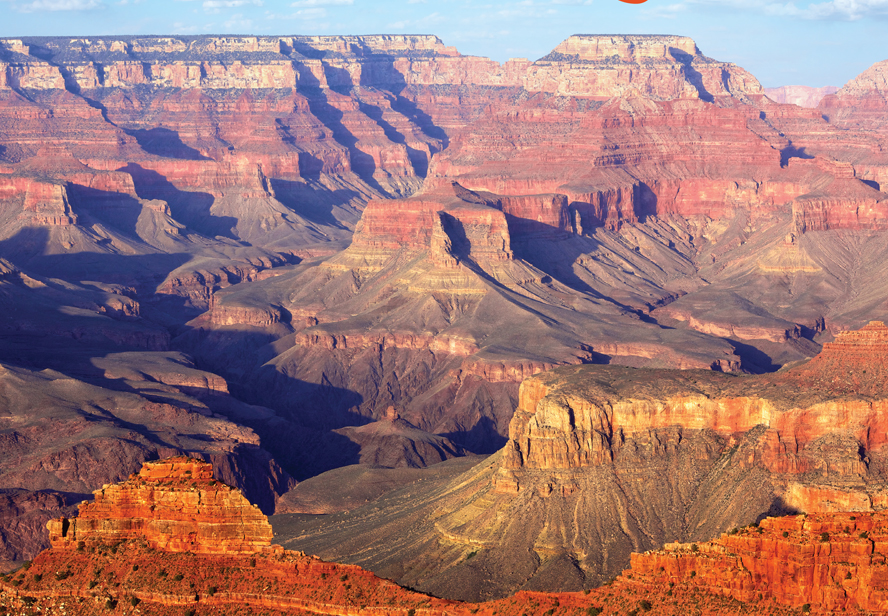 I recently read an article about a doting grandmother who’d taken her grandkids to the Grand Canyon, leading them, blindfolded, to the very edge, so they could open their eyes and glimpse the sheer majesty in a heartbeat.

I didn’t have the courage to blindfold myself, but I didn’t need to, for as we approached the South Rim, my mouth opened in silent wonder, then closed and opened again.

Though I’ve been playing with words since I was six years old, for the first time in decades, words failed me. It was a strange sensation, a heady mix of euphoria, awe and wonder, as I drank in the surreal scene. The scope, the vastness, the frightful beauty of the place left me weak-kneed and gasping for breath.

I have been fortunate to visit many incredible places of natural wonder, reveling in the palette of the Master Artist, absorbing the vastness of nature and silence and power. Just being, standing silent, as I marveled at the sights and sounds. The geysers at Yellowstone National Park. Niagara Falls. The Swiss Alps. The depths of the ocean from a glass-bottom boat. All were child’s play compared to the majesty of the canyons.

It began, as trips often do, after a wistful conversation about how nice it would be to just escape for a couple of days, sans children, to recover after a beautiful, simcha-filled, yet incredibly stressful summer.

“How about California?” I suggested.

“It’s not practical for a three day trip. How about the Grand Canyon. I know someone who took a trip there this summer, and still can’t stop talking about it.”

“You mean as in the Grand Canyon? Isn’t that, like, the middle of the Arizona desert? It’s probably blazing hot, even in September.”

Still, the idea could not be un-thought. On a whim, I did some research, and realized that this could actually work. The Grand Canyon in early September turned out to be a delightful place to be, weather-wise and season-wise, as most of the tourists were in school.

Still, how would we get there? And aside for admiring the heart-stopping view, what else was there to do?

Though I don’t consider myself a fly-by-night person, two hours later the tickets were purchased, car rental booked, and arrangements for the little ones made. Incredibly, the following week we boarded a flight for McCarran International Airport in Nevada, the closest airport to the remote Grand Canyon, merely a four and a half hour drive away.

The lengthy drive was an integral part of the trip, adding to the sense of wonder and awe.

Envision an endless desert highway with a posted speed limit of 75 mph (merely a suggestion, as most of the cars were pushing ninety), surrounded by miles and miles of desert rock in eye-popping hues. Picture a child in a candy store, with every available sweet known to mankind, the shelves being restocked every moment. We almost didn’t want the incredible drive to end.

We made a brief stop at the Hoover Dam, a massive architectural marvel at the edge of the Nevada Desert, boxing in the Colorado River, creating Lake Mead, the bluest, most placid lake I’d ever seen.

We continued our desert journey into the heart of Indian territory, the desert steppes of Arizona, home to the Hulapai and Yavapai tribes (some of which “own” large swaths of the canyon). We learned that the Grand Canyon had several rims, including the remote north and easily accessible west rim (only two hour’s drive from the airport), but the main attraction, hands down, was the south rim, with its vast, rugged topography and ever-changing palette.

After an overnight stay at a rustic lodge in Tusayan, only seven miles from the Grand Canyon National Park, we headed out early the next morning to see the famed canyon up close. My palms were sweaty, heart-racing, as we got closer. I must confess to a deep-rooted fear of heights; even a ride in a jumbo jet makes my heart race.

Adding to my angst was the knowledge, gleaned from a helpful brochure, that in the canyon, it’s every man (or woman) for himself. Rescue for the foolhardy is not a guarantee.

We stopped at the visitor center for comprehensive maps and instructions, mostly warnings to drink plenty of water, due to the desert climate, and to avoid standing at the edge of cliffs that can suddenly give way, plunging the unsuspecting nature buff to an untimely demise thousands of feet below.

On this encouraging note, we trekked to the rim and just stood there, mouths agape, for many long moments.

There’s no point in searching for the right phrase to best describe the canyon’s south rim, 277 miles long, eighteen miles wide, and over a mile deep, ululating ripples of color under a cloudless blue sky. For those who’ve been there, words are superfluous, and for those who haven’t, words won’t suffice.

We spent the next few hours exploring the rim, taking heart-stopping photos at Yavapai Point and Ooh-aah Point, making sure to stay clear of the jagged ledge. I marveled at the intrepid tourists, including small children, who would stop at nothing to get the perfect photo, scampering over the warning signs to perch on small slivers of cliff jutting out just below the rim. Did they have a death wish, or were they over-confident in their balancing abilities? With a houseful of little ones waiting at home, that type of bravado was out of the question for me.

Towards early afternoon, after we’d taken a brief rest and enjoyed a picnic lunch on the rim, it was time to venture into the heart of the canyon via a scenic cliff trail. We took the park shuttle to Angel’s Trailhead, one of the most popular and easier hikes.

First we carefully read the multiple warnings about attempting to go too far, too fast, and being stuck, sans water and energy, somewhere in the depths of the desert. “Warning!” one sign read. “Do not attempt to hike to the bottom of the canyon and back in one day. Survival is questionable, and rescue is not a guarantee.”

My hands were shaking, just a bit, as I retied my laces and checked our water supply before heading out to the great unknown. We would be hiking to the second tunnel, a scenic landmark located about three quarters of a mile down, before heading up again.

We gingerly stepped down onto a nearly vertical dirt trail, about two feet wide, with a craggy wall of rock on one side for support, and nothing but a one mile drop, sans gate or barrier of any sort, on the other. Oh, and we needed to make way for the large mules, which carried intrepid adventure seekers into the heart of the canyon, using the very same two-way path.

I stumbled down, palms clammy, heart pounding in silent terror. The trail was okay, as long as I crept close to the wall, an illusion of support, and refrained from peeking over the edge at the heart-stopping views below. As we inched our way downward, we kept passing exhausted, disheveled hikers going up, some of them in advanced stages of exhaustion, perspiration dripping from their shirts.

We passed the first tunnel, posed for pictures, and carefully tiptoed downward as the trail became steeper and more rugged. “Careful,” an experienced hiker cautioned us, sensing my distress. “It takes twice as long to come up as it does to go down.”

With that thought in mind, we stumbled our way to the second tunnel, about an hour’s hike down, and rested for a few anxious moments before making a U-turn to retrace our steps. Surprisingly, the upward part of the hike, though physically more challenging, was considerably easier. Somehow, the views didn’t look as terrifying while traveling away from the yawning chasm, and our sneakers had better traction on the way up. Incredibly, and despite what the guidebooks warned, the way back took us a mere forty-five minutes.

“Hiking the Angel Trailhead: a lesson for Elul,” I mused later that evening, as I tried to journal and record the memories.

Then I wrote: Going downwards: Heart-stopping. Fast-paced, with incredible views and an uncontrollable descent.

Also, scary, shaky, with no foothold or support. Constant fear of falling over the edge.

Also, the security of knowing the hardest part is behind you. The thrill of having “made it.” The luxury of striding upwards, of knowing where the tough places are and how to pace yourself.

There are no safety barriers on your way to the heart of the canyon, no rangers to save you from stupidity or foolhardy choices. As the signs proclaim, “Rescue is not a guarantee.”

Yet Elul, the annual journey of the soul, comes with plenty of signposts and helping hands to catch us on our laborious, heart-stopping, life-changing trek to the rim.