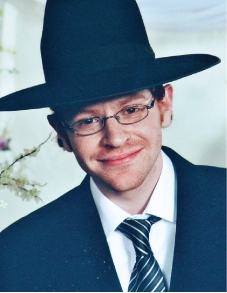 Since Friday, police, Ichud Hatzala and Zaka, along with hundreds of volunteers, have been searching the Yerushalayim Forest and the surrounding neighborhoods of Bayit Vegan, Kiryat Yovel, Hadassah, and Ein Kerem for Aharon Sofer, a 23-year-old bochur from Lakewood, New Jersey, who is presently a talmid at Yeshivas Kodshim of Yerushalayim headed by Rav Tzvi Kaplan. Aharon's parents, Reb Moshe Tzvi and Chulda Sofer, released a video pleading for people to help find him and offered a 100,000 shekel reward.

Aharon was last seen in the Yerushalayim Forest near Beit Zayit at noon on Friday. In these tense times, there are fears that he may chas veshalom have been kidnapped or worse.

Aharon’s parents and an uncle rushed to Israel to help with the search and demanded army involvement.

“A physically, mentally and emotionally healthy young man does not go missing for 72 hours,” said family representative Dov Hirth. “The family is not satisfied with the way the search and rescue operation has been handled thus far. It’s well-known that a murder took place in that forest, and especially with the ongoing tensions with Palestinians, we feel there should be a military presence and involvement in the search for Aharon.”

New York Assemblyman Dov Hikind said he feared Aharon may have been snatched by Palestinian terrorists. “There’s a sense that not enough was done from the very, very, beginning,” said Hikind.

“We don’t know how to deal with this,” a family member told Arutz Sheva. “They tell us that there are fears for his life, and there still isn’t even a thread to go on, but what’s driving us crazy are the rumors of an abduction… In days like these, when there is tension about security, this is the worst scenario that we could have imagined.”

Although police are taking a possible kidnapping into consideration, they were concentrating on searching the large hilly area where Aharon was said to have disappeared from, as well as its environs.

Bentzion Oiring, head of Zaka in Yerushalayim, explained that the army is not involved in the search, because the police found no firm evidence or indications of a kidnapping. The army only gets involved in security issues and not in searches for missing persons, he said. However, police spokesman Micky Rosenfeld insisted that police are investigating all angles, including the possibility that Aharon may have been kidnapped by Arabs. The police have involved the Israel Security Agency (ISA) in the search.

Aharon was last seen on Friday while hiking through the Yerushalayim Forest with a friend. Arriving at a steep incline, his friend proceeded further while Aharon remained behind. Aharon had no water and was reluctant to go down the steep slope. His friend called out two or three times to ensure Aharon was behind him and he answered positively. At one point, Aharon did not respond, but by then, his friend could not go back and continued until the end of the decline.

At 6 p.m., the friend reported Aharon’s disappearance to the police and a search was initiated. On Shabbos morning, at 1:45 a.m., a police representative phoned Bentzion Oiring and apprised him of what had happened. Oiring received halachic authorization to begin a search on Shabbos. The search developed into a huge undertaking joined by members of Zaka, Ichud Hatzalah and rescue units from Gush Etzion, assisted by a police helicopter, riders, dog units, and police.

“We don’t know where he disappeared to,” one person involved told Arutz Sheva. “While we want to believe that he finished the forest path and went to one of the yeshivos or to an apartment somewhere, each passing hour that he doesn’t contact us raises the concern that he is unable to contact us. There is definitely a fear for his life. Therefore, we ask for the help of the public.”

Loudspeaker vans drove through the streets of Yerushalayim appealing, in the name of the Gaavad and the Badatz of the Eidah Hachareidis, for bochurim and avreichim to join the search. Searchers were told that Aharon is 5’9” tall, with a lean build, short red hair, red peyos and a short red beard. He was wearing black pants, a white shirt and a black yarmulka at the time he disappeared.

For a while, it seemed that Aharon had left the forest, as bochurim from Yeshiva Derech Hashem in Har Nof claimed that a bochur answering to his description arrived at the yeshiva, slept there overnight and then disappeared.

“On Friday night, at about 12:00, we were walking in the vicinity of our yeshiva,” Chizki Zaltz of the yeshiva said. “When we returned, a young yeshiva bochur approached us and asked for a place to sleep, saying he had nowhere to go. He was thin, red-haired, with a hat and jacket, and could barely speak Hebrew. He looked like a normal bochur and we arranged him a room to sleep. When we got up, the bochur wasn’t in the room.”

Investigating police concluded that the story involved another bochur and continued the search with the assumption that Aharon disappeared in the Yerushalayim Forest. Zaka representatives say that there are no new leads, but that police are widening the search to include areas they have not yet examined. Presently, they are focusing on two areas, Pi Glilot in Givat Shaul and the Castle area of the forest near Hadassah Ein Kerem Hospital.

“I learned about Aharon Sofer over the weekend and became very concerned for his wellbeing,” he said. “I immediately sent a letter to Secretary of State John Kerry Monday urging that the State Department take every action to help in the effort to locate Aharon. In response, Secretary Kerry’s chief of staff, David Wade, assured me that the Department ‘was totally committed to assisting Aharon and his family.’”

“I hope that Aharon will be located and returned to his family safely,” Smith added. “Until that day comes, he and his family are in our prayers, and I will work with the State Department to use all resources available to find him and bring him to safety.”

In his letter to Kerry, Smith wrote as follows:  “I am writing to urge you to use all appropriate resources available to the U.S. Department of State to assist in the case of Aharon Sofer… Whether Aharon has been lost, injured or kidnapped, it is in the interest of the United States Government to find out what happened to this American citizen. Therefore, I urge you to indentify key staff within the Department and all relevant U.S. Government officials at the U.S. Embassy in Tel Aviv who can help Aharon’s family and assist Israeli authorities in the search.”

“My thoughts are with Aaron, his family, and the entire Lakewood community as the search for this bright, devout, and loving young man continues,” he wrote. “I’m deeply concerned about his disappearance and have been in consistent contact with the State Department and U.S. officials on the ground in Israel since this was reported. I’m praying for his safe and speedy return. I will continue to press for all possible resources to be used to help locate and return Aaron to his family.”

New Jersey Senator Robert Menendez, chairman of the Senate Foreign Relations Committee, also issued a statement. “Ever since I was notified that Aaron went missing in Israel, my office has worked very closely with the State Department, U.S. Embassy and Consular officials in Israel, and the Israeli Embassy in Washington, D.C.,” said Menendez. “While investigators are pursuing every lead, we keep Aaron and his family in our thoughts and prayers.”

Congressman Smith said that he was assured by the State Department and Secretary of State that “they are working closely with the Israeli police and all levels of the Israeli government.”

Aharon’s brother, Yaakov, remarked, “All I want to say is bring him back. Bring him back in good health.”

“The police are working tirelessly on all fronts, and all options are being strongly investigated,” Aharon’s father said. “We would like to thank the American Consulate, the office of the Consul General, the FBI and the Israeli Police and ZAKA for all their efforts in trying to find our dear son, Aharon. There’s a reward of 100,000 shekels for any finder of Aharon.”

Many tefillah and Tehillim gatherings have been held for Aharon’s quick return. A minyan of men traveled to Vineland, NJ, to daven at the kever of Aharon’s grandfather, Rav Moshe Eisemann zt”l. On Sunday, a tefillah gathering took place at Bais Faiga Hall in Lakewood. Another was held at Yeshivas Ohr Moshe in Lakewood, which is led by Aharon’s uncle, Rav Binyomin Eisemann, where Aharon studied in the past. On Tuesday, thousands gathered at Bais Medrash Govoah in Lakewood to say Tehillim.

In addition, the bochur’s family is arranging for people to recite Sefer Tehillim 1,000 times. The public is requested to say Tehillim and daven for Aharon ben Chuldah.

“I want to thank everyone for all the help, but I ask you, please, please, please — I beg of you, beg you — please, if anyone sees any whereabouts of Aharon, please call the police immediately,” Aharon’s mother pleaded in tears.