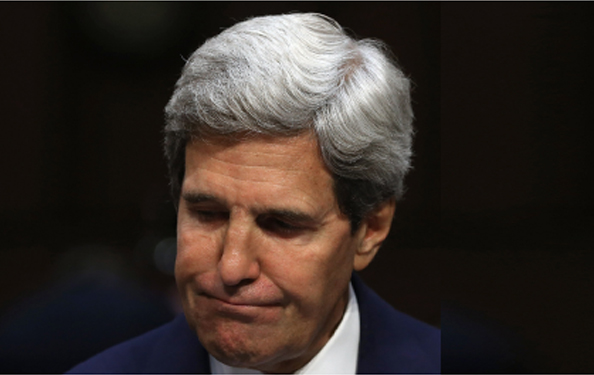 Half an hour after Secretary of State John Kerry began his long-awaited speech on December 28, Israel’s Channel 2 had already dropped live coverage (even though there were forty minutes more to go). He had lost his intended audience.

Even if we were to give Kerry the benefit of the doubt and assume that the speech was one final attempt to convince Israel to abandon a course that Kerry and his boss have decided is ruinous for Israel, it was a failure. He failed to show sufficient understanding of the situation in which Israel finds itself to convince Israelis, including many opposed to the settlement enterprise, to pay attention to him.

Israeli withdrew from southern Lebanon, and today Hezbollah has 150,000 or more missiles aimed at Israel, many of them highly sophisticated. Israel withdrew from the Gaza Strip and uprooted 17,000 citizens from their homes, and has had to fight four wars in Gaza subsequently to end the rain of rockets on Israeli citizens living within the 1949 armistice lines.

Israelis have little reason to believe that a withdrawal from Yehuda and Shomron would not similarly result in another failed state on its borders serving as a magnet for a wide array of terrorist groups. The Hamas takeover of Gaza following Israel’s withdrawal is the applicable precedent. Israel already has two such failed states on its northern border in Syria and Lebanon.

Kerry expressed confidence that demilitarization and sophisticated technologies could secure Israel from terror attacks from a Palestinian state in Yehuda and Shomron. But such promises fall flat on Israeli ears. In 2006, the U.N. Security Council undertook to prevent the rearmament of Hezbollah and the return of the missiles menacing Israel. But U.N. peacekeepers have made no effort to do so in the years since, and Hezbollah has more missiles and more lethal ones than at the outset of the Second Lebanon War.

KERRY JUSTIFIED THE U.S. ABSTENTION on Security Council Resolution 2334 on the grounds that the “two-state solution is now in serious jeopardy” (emphasis added). But the fundamental problems with the two-state solution have long been evident and pre-date the current Israeli government. Chief among them is that the Palestinians do want a state alongside Israel so much as they seek a better position from which to attack Israel.

Every one of the six parameters for a two-state solution enunciated by Kerry was included in President Bill Clinton’s Camp David parameters. Yassir Arafat walked away from the table without so much as a counter-offer. His successor, Mahmoud Abbas, did the same in 2008 in response to an even more generous offer from then Prime Minister Ehud Olmert. No Palestinian leader can yet be found who is willing to sign off on recognition of Israel as the state of the Jewish people or renounce the right of return to all those who left their homes during the 1948 War of Independence and their descendants – a recipe for the end of Israel as a Jewish state, even within the 1949 armistice lines.

As Abraham Sofaer, State Department legal advisor between 1985 and 1990, has written, only when the Palestinians begin dismantling the refugee camps designed to keep their inhabitants in a permanent state of misery will there be reason to think that they seek a state. In the meantime, generations of Palestinian leaders have failed entirely to create the institutions of a civic society that would make a state viable. The vicious civil war between Hamas and Fatah in Gaza following Israeli withdrawal is hardly an encouraging precedent.

The second clear sign of Palestinian interest in a state would be the end of continual incitement against Israel and Jews in the official media. Instead, the next generation of Palestinians is whipped into a continued frenzy of hatred, which makes it impossible for Israelis to believe in the possibility of peace no matter what is written in “peace” agreements.

THE OBAMA ADMINISTRATION’S OBSESSION with settlements, including all building in Yerushalayim from 1967, far from advancing the chances of agreement, has actually made them more unlikely. For one thing, by repudiating President George W. Bush’s April 14, 2004, letter to then Prime Minister Ariel Sharon acknowledging that any agreement will have to take account of facts on the ground since 1967, including massive building in Yerushalayim and the creation of densely populated settlement blocs, Israelis learned better than to rely on American promises or security guarantees.

President Barack Obama came into office convinced that settlements were the key to solving the Palestinian-Israeli conflict and solving that conflict was, in turn, the key – in Kerry’s words – to stabilizing a “volatile” region. Nothing in the last eight years – the dissolution of Syria, the rise of ISIS, the addition of Libya to the long list of failed Arab states, the civil war in Yemen, the travails of Egypt – have done anything to awaken him from his delirium about the source of that volatility.

Obama’s very first action in office was to demand a freeze on all settlement activity, including building in Yerushalayim neighborhoods like Ramat Shlomo. That demand blind-sided Abbas, as Adam Garinkle of the American Interest explains, because the Palestinians had never advanced such a demand since the start of Oslo, for they knew that such a demand would be the end of the so-called “peace process.” And indeed, complete stasis followed Obama’s demand.

That demand reinforced the worst Palestinian tendencies by convincing them that they need not negotiate or ever make any concessions, but could rather depend on American and international pressure to wrest everything they demand from Israel. On his first visit to the Obama White House, Abbas shocked the editorial board of the Washington Post by telling them that he had no interest in face-to-face negotiations with Israel and preferred to rely on third party pressure on Israel.

Resolution 2334 takes the “internationalization” of the conflict much further by declaring the disputed territory captured by Israel in 1967 to belong to the Palestinians and Israel to be in flagrant violation of international law by building beyond the 1949 armistice lines. Now, no Palestinian leader will be able to take into account the post-1967 realities on the ground, for by doing so, he would be ceding stolen Palestinian land.

Finally, Resolution 2332 and Kerry’s speech made increased Israeli settlement activity almost inevitable. Contrary to Kerry’s assertion that settlement activity has increased under the most right-wing government ever in Israel, in fact, as Evelyn Gordon pointed out in Commentary, there has been less settlement construction under Prime Minister Binyomin Netanyahu than any of his successors. Even the most fervent anti-settlement activists agree on that point. According to the Israel Central Bureau of Statistics, over three-quarters of the growth in the settler population under Netanyahu has been in the major settlement blocs. And almost all of that growth has come via “natural increase,” not movement to the settlements. Since 2009, a mere 20,000 people have been added to areas likely to become part of Palestine in any peace agreement.

By giving Netanyahu no credit either for the nine-month settlement freeze at the start of the Obama presidency or the slow pace of growth since then, including setting himself against most of his coalition to ensure that Amona is dismantled, in accordance with Supreme Court orders, the Obama administration effectively removed any incentive for restraint. And by coming down hard at the Security Council against Israeli claims to disputed territory, it effectively ensured a defiant Israeli response.

And make no mistake. Israel needs to build in the settlement blocs and Yerushalayim to house its growing population. The indispensable Gordon notes that Yerushalayim’s Jewish population declines by 18,000 every year due to a lack of affordable housing. And since 2008, the number of average monthly salaries needed to purchase an apartment in Israel has skyrocketed from 43 to 146, more than double the rate in most countries.

Summing up the impact of Obama’s obsession with settlements on the peace process, Yale professor Charles Hill, a former State Department chief of staff, writes: “Obama has done just about all he can to make [a] negotiated settlement impossible.” The editorial board of the liberal Washington Post reached the same conclusion: “[T]he administration’s inability to learn from its mistakes or adjust the ideological tenets that Mr. Obama brought to office . . . will do more damage to the two-state solution that Mr. Kerry claimed to be defending.”

THE TRUTH IS THAT MOST ISRAELIS would accept a real peace according to the parameters laid out by Secretary of State Kerry in his seemingly interminable speech. Alas, peace involves more than drawing a line on the map, as American policymakers never seem to learn. And few sane Israelis believe that after decades of fierce opposition to Jewish settlement in the land and incitement that has only grown more feverish since the start of Oslo, the Palestinians have made a decision to live in peace.

We do not trust promises of demilitarization. The Gaza withdrawal demonstrates that Israel would be condemned universally if it ever attempted to enforce Palestinian undertakings to remain demilitarized, and the U.N. and the nations of the world would never do so of their own accord.

That leaves Von Clausewitz’s advice to prepare for war if one seeks peace, which, in turn, means Israel would have to retain control of the Jordan River Valley and the high ground overlooking its narrow, densely populated coastal waist in any final agreement with the Palestinians. How likely does that look now?

The most favorable interpretation of Kerry’s speech is as an expression of pique for being denied the Nobel Prize sure to await the one who finally unlocks the puzzle of Palestinian agreement to live in peace with Israel. The least favorable is that it was another expression of the ideological animus with which President Obama came into office and with which he will leave.