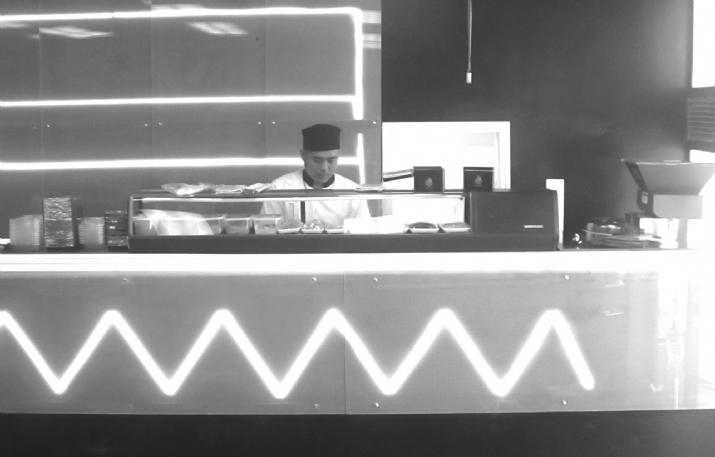 Meet Andy, formally known as Ting-Wei Tai. He was born in America, raised in Taiwan, studied â€˜criminal law' in an American university, and was planning to settle down in Queens and become a cop one day. Andy's original dream was to walk the beat as a policeman somewhere in Flushing, Queens. Instead, he's making outstanding sushi in a kosher restaurant in Woodbourne. How did that happen? Andy says that police work might have been satisfying enough as a career, but â€œI wasn't feeling it.â€ It was okay as a hobby, but it wasn't his passion. What he really loved was making people happy with food. â€œI like the look on people's faces when you make something they really like.â€ And so he ditched his original plans and decided to learn the fine art of being a sushi chef.

Learning how to become a sushi chef — a really good one — is not easy. First you have to find a sushi master who is willing to teach you. Some of them don’t even want to share their exclusive secrets. He finally convinced Sushi Master Danny in Brooklyn to teach him, but then he had to undergo a long and arduous training process. “For the first three months,” says Andy, “I was just slicing cucumbers.” Three months of slicing cucumbers?? Didn’t that drive him crazy? “No, not at all,” Andy says. “The more you practice slicing the cucumbers really thin, the more you learn how to control the knife.”

I am standing at the Sushi Counter at Dougie’s in Woodbourne, watching Andy skillfully slice cucumbers as he speaks. He pares them deftly in long strips to create thin rectangular pieces which will eventually be used for wrapping sushi. It’s pretty clear that Andy is an expert at his craft. He tells me has already invested two and a half years of his life in training.

So it’s not surprising that Chaim Klein and his wife, proprietors of Dougie’s in Woodbourne for the past ten years, hired him as their exclusive sushi chef this summer. Dougie’s has a well-earned reputation for its pursuit of excellence and elevated culinary standards. It’s no wonder, then, that when it came time to choose a sushi chef they went for the best.

Dougies Bar-B-Que and Grill is located at 1 Main Street and is under the OU and Udvara hashgachos. Their extensive menu includes all the celebrated Dougie’s favorites (fire poppers, buffalo wings, super combo platters, monster burgers) as well as traditional kosher fare (deli sandwiches, Caesar salads, and homemade chicken soup). Between camp trips, bungalow colony groups, and family simchos, Dougie’s is a happening place. Still, the Kleins are always searching for ways to upgrade and enhance their services. So this summer they decided to add sushi to their menu.

Why sushi? “People have been asking for it over the years,” explains Mr. Klein. “Our community’s fascination with sushi is still going strong. It looks nice, it’s filling, it’s exotic, and it tastes good.” The sushi menu at Dougie’s is almost as extensive as the regular menu. And apparently, Andy can expertly create each selection with his own special flair.

Andy gives me a brief tutorial on the sushi making process. He says that one of the mainstays of really good sushi is the rice, which has to be cooked in a special way. He won’t disclose how it’s done but he does show me that the rice is sitting peacefully in a cozy ‘warmer’ on the side of his work station, waiting for him to mold it with the maki when he needs it.

I tell Andy that there are people who try to make sushi at home, but he laughs at the suggestion. It takes years to master the techniques, he says. And then he reveals that sushi making is a very strict discipline. “The master chef watches you very carefully. If you mess up he smacks you on the hand with a sushi knife, which really stings.”

When I seem shocked at such harsh disciplinary methods, Andy explains that this is not unusual for oriental cultures. “In Taiwan,” he says, “children who don’t behave in school are punished in a similar way. The teacher smacks them on the palm of their hands with a ruler. Now that hurts.”

In case you’re wondering how a Taiwanese cop-wannabe from Queens ends up in a kosher eatery in Woodbourne, Andy explains that he was introduced to Chaim by a mutual friend. Chaim was impressed with Andy’s skill and Andy was intrigued by the idea of going up to ‘the country’ and so he agreed to be the sushi chef at Dougie’s this summer. So far he is very happy here. “The air is clear and there’s not too much traffic,” he points out.

The store has been quite busy already during its first week, and Andy doesn’t mind. His work station is on an elevated area near the main counter, so he has privacy and plenty of space to do what he does best. He enjoys meeting all the customers who come to Dougie’s. He is, after all, a people person and is happy to work in the relaxed atmosphere that we fondly refer to as ‘the country’.

What’s the most popular sushi selection at Dougie’s? The volcano roll. Sounds scary, but he says it’s really not that explosive. It’s made with spicy kani and cucumbers and topped with spicy tuna. He points out that Americans like to eat their sushi with lots of ginger and wasabi sauce, but in Japan, it’s a whole different story. “They don’t really eat sushi much,” he explains. “They prefer to avoid the carbs and simply eat raw fish with a little soy sauce and a little wasabi.”

How about the chopsticks? Is that part of the experience? Andy says it is and adds that he teaches people the correct way to use them. He expertly rolls up the chopstick’s paper wrapper and places it between the two sticks, thereby creating an apparatus that closely resembles a tweezer. He, of course, maneuvers the chopsticks like a real pro. I think I’ll stick to using my fork.

Now that Dougie’s is open on Motzoei Shabbos, Andy works five-plus days a week (he’s off Fridays). He is enjoying the new central air conditioning system that the store recently installed. The Kleins anticipate filling lots of sushi orders this summer, so they purchased a pricey state of the art ‘maki maker’ machine which can roll out the sheets of rice efficiently in perfect rectangular shapes.

I ask Andy to give us a sushi demonstration, and he is delighted to do so. His hands work swiftly as he rolls out layers of rice and seaweed, sprinkles on toasted sesame seeds, and finally adds spicy tuna. He shapes the rolls with bamboo, which tightens the mixtures. Andy can’t resist to show us a neat trick where he creates heart shaped sushi rolls by subtly shaping the bamboo in a different manner. He offers to make me a ‘spider roll’ (his favorite) which includes tempura kani, sweet potato and asparagus with a crunch. The result is very artistic, looks eerily like a spider’s legs are dangling in mid-air, and is piping hot. Say what you will, there’s nothing like freshly made sushi.

I ask Chaim why our community is so fascinated with sushi, and he’s not really sure himself. Perhaps it’s the combination of colors and textures that are appealing. Perhaps we’re just desperately looking for an alternative to gefilte fish. Either way, kosher sushi has been around for quite a long time already and the trend remains strong. Dougie’s of Woodbourne offers yet another excellent venue at which to enjoy it. And not to worry, those who insist on resisting this particular fashion statement are still welcome to order buffalo wings and fire poppers.