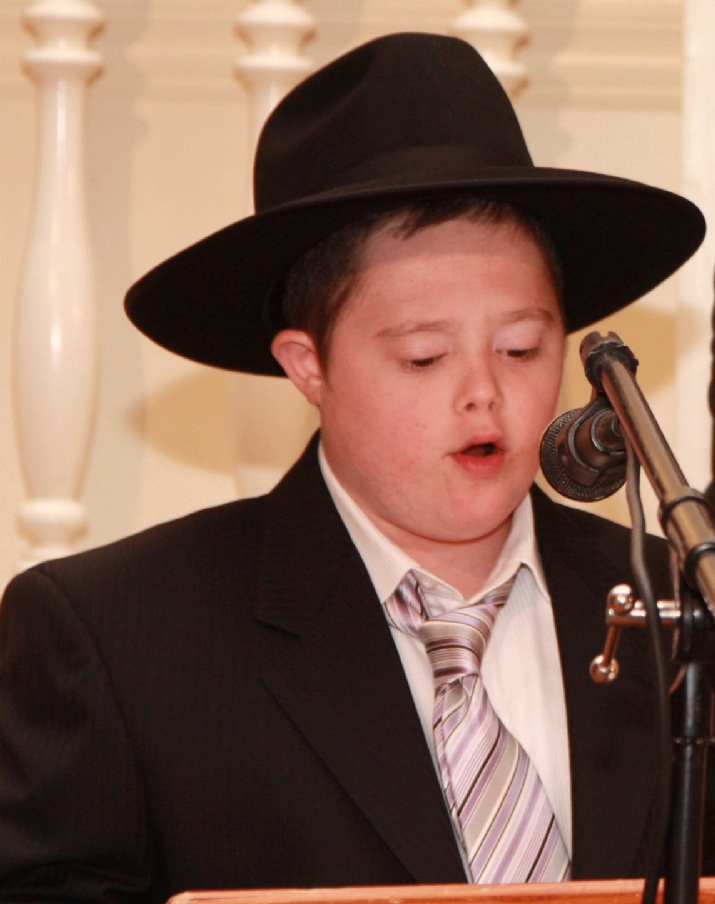 As the bar mitzvah came to a close and strains of Yossele Rosenblatt's Shir Haamalos could be heard emanating from the keyboard of Rabbi Eli Cohen, it was difficult to hold the tears back. The atmosphere was electric and the guests were soaking it all in. It was obvious that most of the attendees had never been to an event of this sort. And as I looked around, I saw that I wasn't the only one fighting the strong emotions inside. After all, this wasn't just any bar mitzvah. This was Chaim Tzvi Katz's bar mitzvah.

Who is Chaim Tzvi?

He’s hard to describe in mere words, so just imagine the most lovable, jovial, huggable thirteen-year-old and you’ll begin to get the picture.

Chaim Tzvi is one of those special, unique neshamos Hashem has blessed our world with. He is one of those individuals who were created with special needs and an equally special mission in this world that is quite different, but no less important, than ours. In fact, in Chaim Tzvi’s case, he has already positively impacted many hundreds more people than some of those decades his senior.

It was thus no wonder that I wouldn’t miss his bar mitzvah. Despite being out of town last Tuesday, I rushed back to Lakewood as day turned to night so that I could attend this celebration, a bar mitzvah like no other I had ever attended.

As I approached Bais Faiga Hall with the clock approaching 10 p.m., I knew that I had missed most of the program. Unperturbed, though, I entered the hall – a hall usually reserved for weddings – just in time to hear Chaim Tzvi be introduced to deliver his p’shetel. Several hundred people sat in rapt attention, hanging on to every word of a p’shetel that was as sweet and as beautiful as anything they had ever heard in their lives.

In truth, the endearing bar mitzvah boy didn’t have to say a word. Having made a siyum on Mishnayos Sukkah earlier, he could have just stood there, proudly cloaked in his brand new suit and hat, beaming from ear to ear, and that would have been sufficient inspiration for any of the multitudes of guests in attendance. Yet, with aplomb and with amazing confidence, Chaim Tzvi began to read his p’shetel, even making eye contact with the crowd, adjusting the microphone for his comfort, and cracking an impromptu joke to boot. “Classic Chaim Tzvi,” those who know him would say.

As I took the scene in, I wasn’t sure if I was more inspired by Chaim Tzvi or by his parents, who have demonstrated that love and care can conquer all obstacles and can accomplish the impossible. I reflected, as I listened to Chaim Tzvi’s voice, on the love showered upon him by his doting parents and grandparents, his extraordinary teachers, and his many friends of all ages.

And then I paid extra attention to Chaim Tzvi’s message. He spoke about Oig Melech Haboshon, the awesome giant who wished to destroy Klal Yisroel. Ultimately, Moshe Rabbeinu, despite being diminutive in size compared to the fearsome leviathan, slew Og, who was delivered into his hands by the Ribono Shel Olam. This, Chaim Tzvi told his audience, teaches us all an important lesson.

“We just have to try and then Hashem will take care of the rest,” he said. “When a boy becomes bar mitzvah, he has to keep 613 mitzvos – and that’s a lot. But we learn from Moshe Rabbeinu that a person just has to try his best and Hashem will help. Since I am a special needs child, certain things are very hard for me, but I am no different than you.

“You have to try your best,” continued Chaim Tzvi. “I have to try my best. And when we do that, Hashem always helps.

“I want to thank Hashem for always helping me, especially with my bar mitzvah. I will try my hardest to make everyone proud of me and I know that Hashem will help me.”

I let the tears fall, and so did those around me. How could we not?

But I consider myself privileged to be among the many who have gained priceless lessons from Chaim Tzvi and his parents.

After all, Chaim Tzvi taught me that all Hashem wants us to do is try. And there is no greater lesson than that.