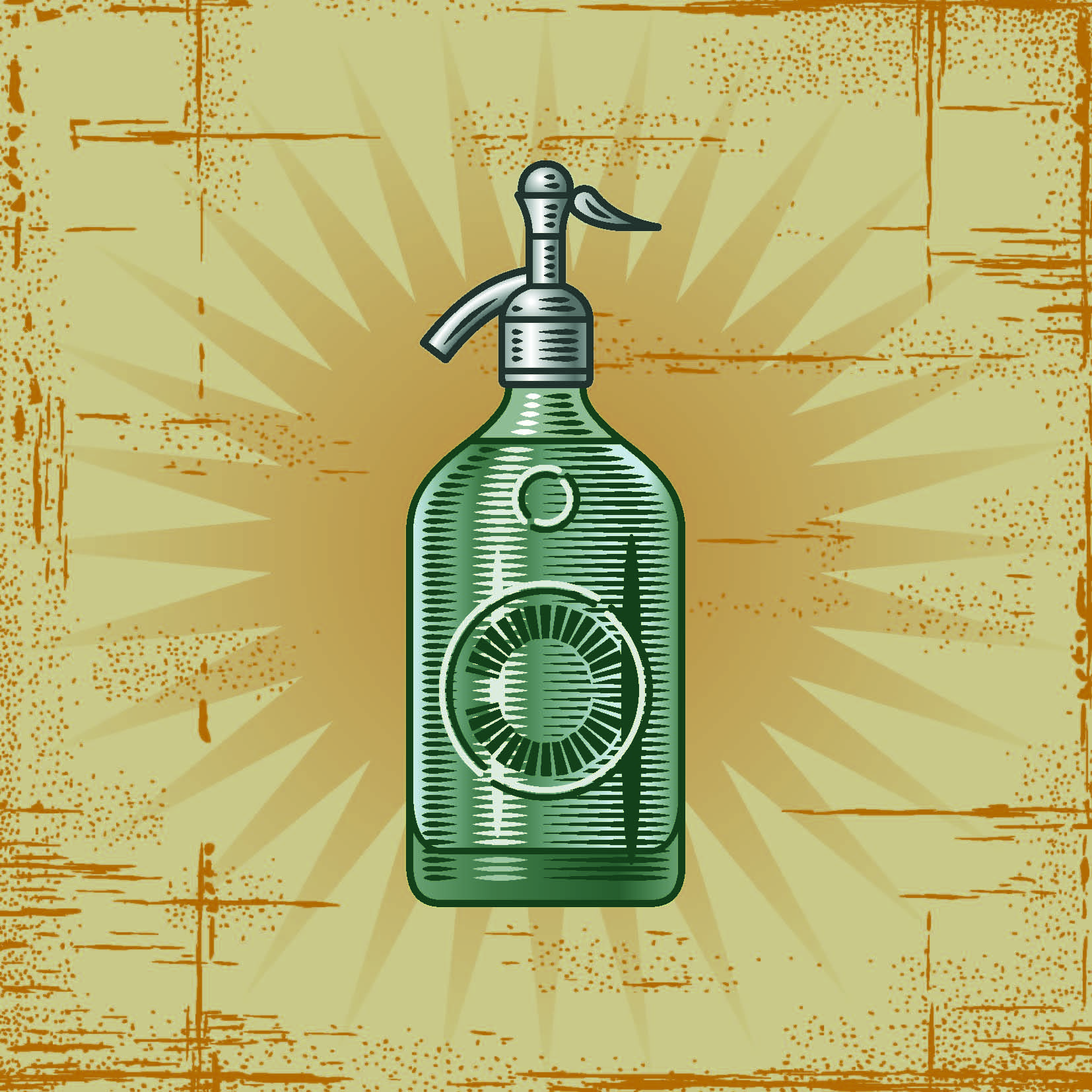 After some hesitation, I’m ready to admit that I’m old enough to remember the big and powerful seltzer bottles of the good old days. Today, you see pictures of them on the labels of the plastic bottles you buy in the store, a memory of the past. Those bottles were pressurized, and when you pushed the lever, the seltzer would shoot out with a fury, often spilling out over the sides of your glass. When your parents weren’t looking, you could have some fun with a shpritz in your brother’s face. Of course, it was more fun doing it to your sister, but then it would have been followed by howls, and your parents would quickly find out about it. Every week, the seltzer man would deliver a case of these big bottles. The seltzer was so strong that if you drank it when it was really cold, it gave you brain freeze.

We were a bit nervous about these bottles, afraid that if they fell to the floor, they would explode. As a matter of fact, one of my rabbeim who fought in the war of 1948 in Eretz Yisroel told us something interesting: When they were short on ammunition and were afraid of Arabs approaching some of the Jewish settlements to wreak havoc, they would drop the seltzer bottles from planes and watch the enemy flee for their lives as the bottles exploded.

But with all of the pressure and all of the force and all the strong bubbles, when the seltzer remained in a glass for a while, it became “oisgevept”; it fizzled out. It was just plain, bland water.

This is a perfect moshol for all of the different fads and styles that come upon the scene from time to time. They appear suddenly, become the talk of the town, and everyone gets caught up in them. Then, a short while later, they just evaporate into oblivion.

It’s the same with modes of clothing: hats with wide brims, hats with narrow brims, suit jackets with wide lapels or narrow ones, and the same goes for neckties. Technology is moving at such a fast pace that the new gadget you bought that made you feel so “with-it” and in with the times becomes outmoded with the blink of an eye.

My talmidim laugh at me for still using a cassette recorder for shiurim. You have to search far and wide to buy these tapes. Remember when the cassette recorder first came out, replacing the old reel-to-reel recorders? I thought to myself then, “Who needs these new modern contraptions?”

The field of medicine is no different. What was considered helpful and healthy just a few years ago is today considered hazardous to your health.  And although we were advised not too long ago that certain vitamins are beneficial for various ailments and to avoid fats and eggs like the plague, today this has changed.

The same holds true with the different forces that dominated the world throughout history. At the time they ruled, they were so powerful and imposing, and it seemed that they would be there forever. But even the most awesome kingdoms eventually fizzled out like a glass of seltzer. Today, they are only a memory. Bavel, Mitzrayim, Persia, the Greeks, and the Roman empire were all at the top of the world in their heyday. No one could have imagined that they would ever lose their power. The same can be said for Spain, England and Germany. But eventually, each one had its expiration date and lost its power and glory.

One nation lives on. Despite its struggles, notwithstanding its minuscule size, and in defiance of the fact that throughout history the nations of the world have oppressed it, the Jewish nation is very much alive and well. It flourishes despite the odds against its survival. The Chovos Halevavos says that if one wants to see miracles similar to those that occurred during Yetzias Mitzrayim, he should observe how Yidden have not only survived throughout the golus, but have been very successful amongst the nations who were always antagonistic to them.

Even the gentile world is puzzled by this phenomenon. The great writer Mark Twain, in a famous article published in 1899 “concerning the Jews,” writes so eloquently how “the superpowers rose and filled the planet with sound and splendor, and then they faded and were gone. The Jew saw them all, beat them all, and is now what he always was, exhibiting no decadence, no infirmities of age, no weakening of his parts, no slowing of his energies, and no dulling of his own alert and aggressive mind. All things are mortal but the Jew. All other forces pass, but he remains. What is the secret of his immortality?”

That much can be said about this secret of our immortality is a great understatement. Our holy Torah, both written and oral, with all of its seforim and commentaries, is the key to our eternity. “Not through army and not through strength, but through My spirit, said Hashem, Master of Legions” (Zechariah 4:6). This message was conveyed to us at Har Sinai. Some thoughts in this week’s sedrah illuminate this point, that it is our connection to Hashem that keeps us going.

“And Yisro, the minister of Midyan, the father-in-law of Moshe, heard everything that Hashem did to Moshe and to Yisroel, His people, that Hashem had taken out of Mitzrayim” (Shemos 18:1). There is a machlokes whether Yisro came to the midbar before Matan Torah or afterwards. The Ramban asks on those who say that Yisro wasn’t there for Matan Torah: Why does it say only that Yisro heard about all that Hashem did for Moshe and Yisroel at Yetzias Mitzrayim and no mention is made about Matan Torah, which is from the greatest of wonders that was done for them? And why didn’t Moshe relate to Yisro the miracles of Maamad Har Sinai, where it was revealed to us that Moshe is emes and his Torah is emes and ein od milvado, there is no one besides Him.

The Mirrer mashgiach, Rav Yeruchem Levovitz, points out that the Ramban assumes unequivocally that had Matan Torah occurred before Yisro’s arrival, Moshe would have most certainly told him about it. But why? Would it not have sufficed to recount all of the miracles in Mitzrayim, all of the various aspects of the makkos, all of the revelations in emunah, all of the middah keneged middah with every punishment, and the visions of Krias Yam Suf where even a maidservant saw what Yechezkel Ben Buzi did not see?

We see from this, says Rav Yeruchem, that all of these tales cannot compare to the revelations at Har Sinai. “Atah horeisa lada’as, you have been shown in order to know that Hashem, He is the G-d” (Devorim 4:35). Chazal say that during Matan Torah, Hashem opened the seven heavens and showed us how our limud haTorah and avodah affect the upper world and the reward that we get for them. This revelation gave them clarity like no other experience did. Yes, all of the nissim instilled in them emunah in Hashem, but the visions at Har Sinai illuminated the essence of the world for us.

With this, we can understand a Medrash that quotes Rashi (Shemos 19:9) that before Matan Torah, the Yidden said, “It is our desire to see our King.” But did they not see the Hand of Hashem in the entire process of Yetzias Mitzrayim? We see that with all the miracles, there were still some lingering doubts in their minds. These were all clarified at Matan Torah. This was a special level of “atem re’isem – you have seen that I have spoken to you from heaven” (Shemos 20:19).

“And the entire people saw the sounds” (Shemos 20:15). Rashi quotes the Mechilta that they actually saw what was being heard, something that is normally impossible. What is the meaning of this? We know that Hashem does not perform miracles without purpose. Why was it necessary to see the words of the commandments?

Chazal tell us that the Torah was created 974 generations before the world was (Shabbos 88b), and that Hakadosh Boruch Hu looked into the Torah and created the world. The Torah is the blueprint for the entire briah. Because there is a mitzvah of kibbud av v’eim, Hashem created the concept of parents. Because there is a mitzvah of bringing korbanos, Hashem created the pure animals. This is true of everything in the world. It is connected to Torah and its essence is kept alive by the Torah.

At Maamad Har Sinai, we were able to see the kolos. We were capable of seeing how each commandment in the Torah that we heard correlated with the part of the briah that was created for it. We saw the genetic makeup of everything in the briah and how the Torah actually sustains it. This is a clarity that no other miracle could give us. This is why the Ramban is sure that had Yisro appeared after Matan Torah, Moshe Rabbeinu would have certainly related this amazing experience to him.

While we ourselves were not present at Har Sinai, our neshamos were, and we experienced the level of atem re’isem, you have seen. Furthermore, this clarity is conveyed from parents to children and from rebbi to talmid in every generation. It is this clarity and our connection to Hashem that sustain us for eternity while the other powers fizzle out.

“And the sound of the shofar grew continually much stronger” (Shemos 19:19). Rashi explains: When a regular person sounds the shofar, the longer it goes, the weaker the sound gets. Over here, the sound got stronger and stronger. This is a tremendous chizuk for all of us. Despite all of the nisyonos and hardships, we have outlived all of the nations and continue on our path with fervor and strength. For with all of their power, they are disconnected from the essence of the world, where we who cling to the Word of Hashem get stronger and stronger as we maintain our grip on that sound of the shofar.