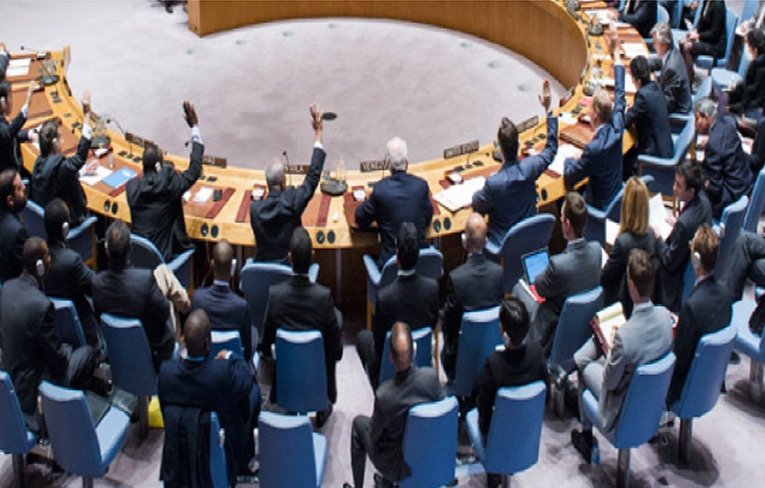 President Barack Obama has spent his last months, weeks, and even days in office attempting to handcuff the incoming administration as much as possible. Thus, he declared vast expanses of American territorial waters off limits for drilling, under a statute that gives the president discretion to do so, but provides no explicit power to revoke a previous president’s decision. (President Obama’s interpretation of his immutable authority is sure to find its way to the courts.)

None of those efforts was more significant or likely to have a greater long-range impact that the U.S. abstention on U.N. Security Council Resolution 2334. Revoking the resolution is virtually impossible: the veto of any permanent Security Council member would be sufficient to scuttle any attempt at revocation, and the four other permanent members all voted in favor of 2334.

John Bolton, former U.S. Ambassador to the U.N., termed Resolution 2334, which calls upon “all States” to “distinguish in their relevant dealings” between Israel’s territory and “the territory occupied since 1967,” a “hunting license to ostracize Israel from the international economic system.”

Abraham Sofaer, former dean of Columbia Law School and State Department legal advisor, characterizes the resolution as providing “legal authority under Chapter VI of the U.N. Charter for the Security Council or individual states to take Israel to the International Court of Justice, and establishing the basis for sanctions under Chapter VII.” The Trump administration will veto any attempt to impose sanctions at the U.N., but the resolution will be used, Sofaer observes, by states, the Palestinian Authority, and private groups to justify lawsuits and boycotts, and even outright acts of terror against Israel. Just this week, a German court found an act of arson against a shul to be a justified manner of protesting Israel’s crimes against the Palestinians.

Sofaer, however, does not agree with those who think that there is little that the incoming Trump administration can do in response to the resolution. The United States possesses immense economic leverage, and that leverage can be used to punish those states that act in accord with the resolution. Under the resolution, U.N. member states are required to file with the Secretary-General quarterly reports of the means they have used to distinguish between Israeli territories prior to 1967 and those under Israeli rule since then.

Sofaer suggests that the Trump administration’s first report contain a promise to veto any attempt to enforce sanctions against Israel on the basis of Resolution 2334. President Trump should also seek legislation to pose trade sanctions on any state or company that relies upon the resolution to discriminate against Israel.

Therefore, Kontorovich argues, it is crucial that the United States government declare that U.S. settlements do not violate international law. There is no precedent for a country being declared in violation of international law for permitting its citizens to live in the occupied territories pursuant to a prolonged, belligerent occupation. And if that is true of Turkey in Turkish-held northern Cyprus and Russia in Crimea, how much more so should it be true of Israel, for in the latter case there was no previous recognized sovereign in the territories in question.

To advance its interpretation of international law, the Trump administration must make clear via presidential proclamations, legislation and amendments to existing treaties that it recognizes no distinction between territory within and without the 1949 armistice lines. And it must revoke immediately Obama administration regulations requiring the labeling of products from Yehuda and Shomron, and east Jerusalem as “Made in West Bank.”

Resolution 2332 does not formally repudiate or revoke U.N. Security Council Resolution 242, passed in the wake of the 1967 Six-Day War. But it cannot be reconciled with the earlier resolution. Though 242 contemplates the Israeli “return” (to whom?) of territories captured in the course of the war, it does not mention “the territories” or “all the territories.” U.N. Ambassador Arthur Goldberg and British Ambassador Lord Carrington, the principal draftsmen, made clear that those omissions were deliberate.

To counter the idea that the 1949 armistice lines constitute Israel’s de facto borders, Kontorovich advocates moving the U.S. Embassy to the consular section of Arnona, which is beyond the 1949 armistice lines. That would be consistent, he points out, with the 1995 Jerusalem Embassy Act, which calls for moving the U.S. embassy to a “unified” Yerushalayim, referring to both the truncated city prior to 1967 and the greatly expanded one since then.

Like Sofaer, Kontorovich would use anti-boycott legislation as a club over foreign governments and companies to dissuade them from acting in accord with the logic of Resolution 2332. All U.S. anti-boycott legislation therefore must make clear that it applies with equal force to boycotts of areas where Israel is currently exercising civil jurisdiction.

Finally, both Bolton and Kontorovich would wield the threat of defunding the U.N. – a step that has already garnered considerable support in the new Congress. U.S. dues constitute between 22-25% of the U.N. budget today. The U.S. should continue to fund, however, specific U.N. agencies and actions, such as the World Health Organization and the International Atomic Energy Agency (IAEA), according to Bolton.

To defunding, Kontorovich would add the threat of the U.S. exercising its veto against any Security Council resolution not deemed vital to U.S. interests, thus gumming up the work of the Security Council.

Resolution 2332, which the Obama administration helped to draft and to which it gave a green light, was undoubtedly a poison pill directed at Israel. Fortunately, it is not one to which there are no antidotes, as long as the new Congress and the Trump administration are jointly committed to providing them.