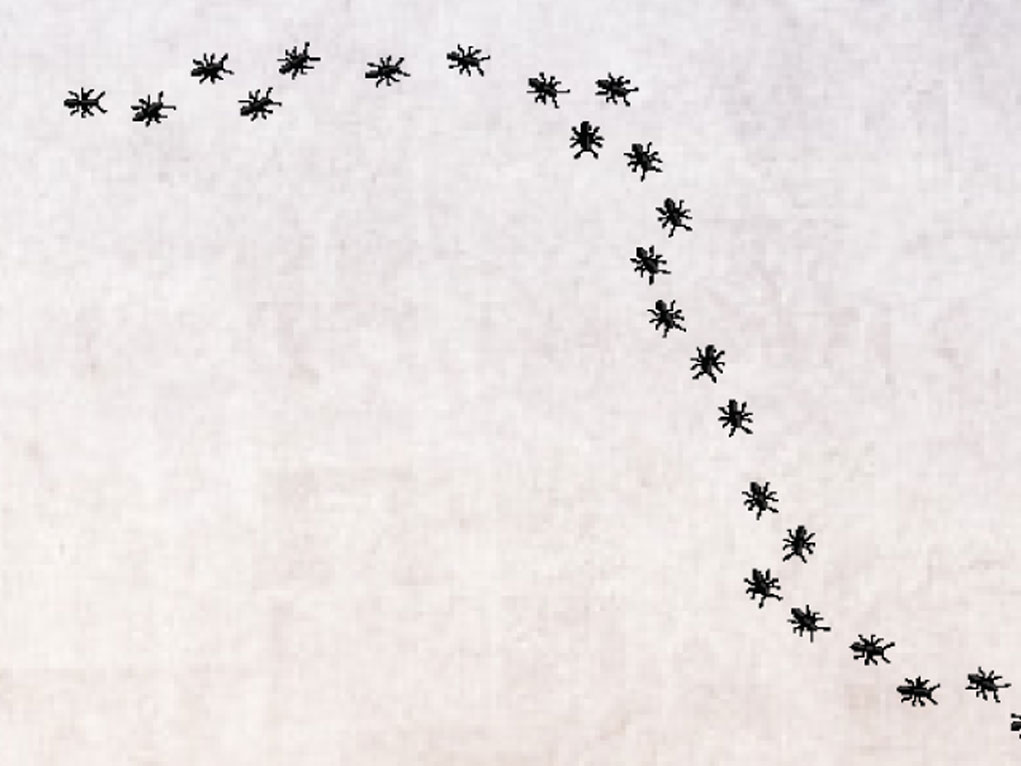 Two world views. The same facts, yet a Torah Jew sees one thing and the secular world sees another. As if we had nothing else to worry about, the ant population has been increasing exponentially. This past September, “scientists at the University of Hong Cong published the most complete census of ants ever assembled… The study estimated that there at least 20 quadrillion (20 plus 15 zeroes) ants on earth. That’s about 2.5 million ants for every human being” (New York Times Sunday “Opinion” section, November 20, 2022, page 3).

The following is the first example of the divergence between our hashkafah and that of the rest of the world, as reflected by our reaction to this number. A major socio-biologist, E.O. Wilson, refers to ants as “the little things that run the world.” Indeed, the Times writer, Farhad Manjoo, concludes that “ants were here before us and are likely to long outlast us.” To add insult to injury, Wilson asserts that “it is easy to slip into thinking of our species as somewhat special.” This is a good time as well to remember the warning of my rebbi, Rav Yitzchok Hutner, that Charles Darwin (along with Sigmund Freud and Karl Marx) ruined humanity with their warped views (Sefer Hazikaron Pachad Yitzchok). We return to Prof. Wilson’s pronouncements about world priorities. He opines that “by many objective measures, ants are far more consequential [than humans] to life on earth. If people were to disappear, the world would suffer little; if ants…did, everything would suffer.”

Now, where we and the scientists can certainly agree is that “ants are an example for humanity to emulate.” The experts point out that “observing the mystery and majesty of ant life…how elegantly they organized themselves, how terrifically busy they all seemed” can be very inspiring. They, too, note “their similarities to humanity” as potential role models in nature. “They live in societies, have jobs, endure arduous daily commutes to work…abject selflessness…master architects, formidable warriors that can also maintain peace through strength and even engage in compromise and democracy.”

Of course, Shlomo Hamelech taught all this long ago. He tells us, “Go to the ant, you sluggard; see its ways and grow wise. Though there is neither officer nor guard over her, she prepares her food in the summer and stores up her food in the harvest time” (Mishlei 6:6-8). Chazal (Devorim Rabbah 5:2) indeed derive two lessons we can learn from the ant. First of all, although it lives a very short life, it stores and sets aside much more than it seems to need for its six months on the face of the earth. We, too, should remember that we must store away mitzvos and learning for the eternity ahead of us. Secondly, the ant is extremely sensitive to anything that is stolen and does not belong to it. In fact, the Medrash describes how the simple ant runs from anything obtained improperly by another ant. In one case (Chulin 57b; Moed Koton 6b), the ants actually kill one of their own who was suspected of dishonesty. Finally, there is the incredible industriousness of the ant – its middah of zerizus – from which we should learn to take advantage of every moment in life, not wasting a precious instant. As the baalei mussar teach (Rav Yechezkel Levenstein, Imrei Yechezkel, “Mishpot,” page 52), “Hashem embedded these middos into the ant so that human beings would learn from it.” Unlike the evolutionists who elevate the ant above mankind, the Torah sees the ant, as it does all of creation, as a source of inspiration for the only creature that has the free will to adopt these wonderful traits. For the ant, they are instinct, but for us they provide the opportunity for growth and proper decision-making and tests. As we recently learned (in our shul between Mincha and Maariv) from the Orchos Tzaddikim (Gate of Laziness), the Creator placed these middos into the tiniest of creatures so that we should be embarrassed if we don’t share at the very least the wisdom of these diminutive creations.

However, my rebbi, Rav Hutner (Pachad Yitzchok, Pesach, Maamar 1), plumbs the lessons from the ant much deeper. He raises a powerful question. The Gemara (Eruvin 100b) lists the natural traits of several creatures that we would be able to deduce even if the Torah had never taught them specifically. For instance, we could have learned modesty from the cat and derech eretz from the rooster. What can we learn from the ant? The Gemara surprisingly does not list zerizus – alacrity – as Shlomo Hamelech teaches specifically. Chazal instead attribute only the middah of avoidance of theft, as mentioned above, but omit the more specific reference in the posuk to zerizus. Why this omission?

Rav Hutner explains that there are actually two types of zerizus. One is a shared trait that can be used improperly to hurry to transgress or which can be appropriated for virtue such as rushing to perform mitzvos. However, there is another manifestation of zerizus, which flows from a much higher place and is unique to kedusha and avodas Hashem. Rav Hutner learns this from the Maharal (Nesivos Olam, Nesiv Hatorah, chapter 17), who speaks of “not allowing a mitzvah to fall under the power of time.” What exactly does this mean?

Rav Hutner explains by referencing the Torah’s juxtaposition of not performing mitzvos with zerizus with not allowing the matzah to become chometz (Mechilta to Shemos 12:17). He points out that a matzah without zerizus (e.g., over 18 minutes) is not simply lacking the positive ingredient known as zerizus. It is in fact the antithesis of matzah, which is chometz. Therefore, there must a “higher zerizus” that is not connected to the hurrying or rushing which can be utilized for good or evil. It is limited to an act that is ruined by the excess of time in which it is performed. What can that possibly be?

Rav Hutner explains that we can learn this from our little friend, the ant. The Gemara does not list zerizus as one of the middos we can learn from the ant, because the “higher zerizus” is actually something that we could not have learned from the ant if the Torah had never been given. Shlomo Hamelech speaks of the “lower zerizus,” which in fact can be good or bad, depending on how it is applied. However, the higher zerizus, which appeared in the world with the advent of Klal Yisroel, is that of our relationship with nitzchiyos (eternity). Klal Yisroel is above time and therefore seeks to perform mitzvos with the minimum amount of time possible. Since we are connected to infinity and timelessness, an excess of time diminishes the mitzvah and brings it into the realm of unnecessary physicality. To add a metaphor to my rebbi’s interpretation of the Maharal, the Einsteinian understanding of time is that it is a dimension like all the other physical realms. Therefore, a mitzvah “tainted” by time becomes like a matzah tainted by chometz.

Rav Hutner concludes with the observation that “the zerizus of the ant is actually the higher form, since it has no need or requirement to act swiftly, piling up her wares, since she will not live long enough to consume it all. On the contrary, her zerizus is that of no sense or limitations of time at all.” Thus, the Gemara could not list zerizus amongst the traits we would learn from the ant if the Torah had not been given, since connection to eternity was only granted with the giving of the Torah. Yes, there are other good things to be gleaned from our little friend, but the higher zerizus could not have been one of them without the Torah. Now that the Torah connects us to eternity, we can perceive that the ant, too, is above and beyond time, living an existence unencumbered by any ticking clock or watch.

We can readily see that with all of science’s marshalling of facts and figures about the ant, they have no understanding of its true depth and power. Of course, everyone in the world can admire the amazing instincts of the ant and its industrious accomplishments. But only we see the ant as our regular reminder that we must act timelessly whenever possible, reaching out to the Eternal One and to eternity itself.