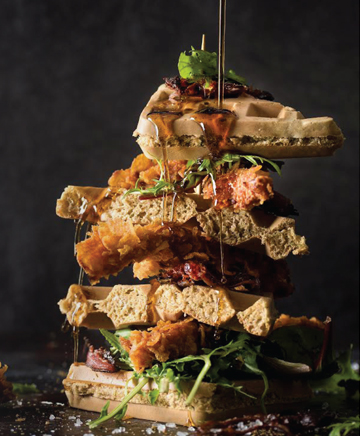 Have you ever tried to recreate a dish exactly as it appeared in the magazine? Somehow, it never comes out quite the same.

Sure, the taste might be good – or even great – but that rice is just so perfectly molded, and the scallions on top are twisted in this artistically impeccable way. My scallions don’t seem to want to do that!

There are those out there, however, who are able to tame their scallions, and in fact coax all of their food into cooperating and sitting prettily for their photo shoot. Food stylist Renee Muller is one such talent. Her striking presentations have been featured in numerous magazines, and now, with her cookbook coming out, we can ogle her plating even more.

This week, Renee stepped out of the kitchen-cum-studio to share her experiences with the Yated.

Yated: Food styling is a relatively new field, especially in the frum world. How did you get into this area of interest?

Renee Muller: I actually fell into it in a pretty funny way, and it’s true, it is a new field – so new that I hadn’t even heard of it before I decided that I wanted to do it professionally.

One Shabbos, I was sitting on my couch with a friend, flipping through a magazine. An announcement caught my eye: they were having a contest to find a new recipe columnist. You were supposed to submit a few recipes and the winner would land a weekly column in the publication.

I pointed to the page and told my friend, “I bet I could win this.”

She actually answered, “I bet you can’t!”

Now I had the added incentive of wanting to show her that I was right.

When I submitted my recipes, I included pictures along with each one, even though they hadn’t asked for them, because that’s just me – I always took pictures of every dish I ever made.

Months went by without hearing from them, and then, out of the blue, they called and told me that I won!

Y: That must have been exciting! Were you in the food industry already?

RM: Not at all. I was a mother, home with my kids. I had always enjoyed cooking and baking, and I had a lot of cookbooks, but that was the extent.

I took the job as the columnist, which I did for three years, but even more than developing recipes, I noticed that what I enjoyed the most was setting up the food for the photo shoots and making it look good.

One day, I was prepping with the magazine’s photographer. She was watching me work and she said, “You should become a food stylist.”

I answered her, “What’s that?” I didn’t even know I could do such a thing! I always credit her with getting me started in the industry.

At the time, I was also working with cookbook authors Leah Schapira and Victoria Dwek, helping them get a new cookbook ready. They had a food stylist there from Israel, and as I watched him work, I knew that was what I really wanted to do.

Y: Describe for us what a food stylist does. Is it just getting food ready for a magazine spread?

RM: That’s a part of it, but it’s much broader than that. Every food product with packaging and every advertisement with food in it has work behind it.

People can’t imagine how much goes into every little picture of food for a label.

In my business, I work with three different types of food styling: magazine shoots, commercial packaging, and online sellers. When someone is offering a food processor for sale online, it looks more professional if he has quality pictures to accompany his post. Usually, the more pictures they post, the better they sell, so they’ll invest in styling and photography.

Y: Are there differences in your work for each of the distinct types?

RM: The work is very different.

With a magazine shoot, there’s much more liberty for creative expression. For a Yom Tov shoot, for example, we will have different color schemes and themes; the work is very varied.

When you style for commercial packaging, the aim is more for perfection than for that eye-catching spread. I worked with a fish stick company recently and it’s amazing how much work goes into one little dish of fish sticks. One has to be open and flaky, to show that it’s real fish, while the other has to be whole, to show the breading and shape. The cook brought out 600 fish sticks for me to choose the perfect ones.

With this type of shoot, the customer is also much more involved and particular; every picture is scrutinized to the tee.

A shoot for an online seller is probably a mix between the two. The food must be beautiful and perfect, but there is that creative element, because the customer is leaving it up to me to devise different dishes that can be created with his product.

Y: I’ve read food tips in the past – sneaky ways to make food look pretty – that used products like Vaseline for gloss. Do you implement any of those tricks?

RM: I’m very adamant that all of my setups use only real food.

I once made a recipe from a cookbook that was a beautiful dessert with gorgeous, high peaks, and I just could not get the peaks to form like the picture. I tried the recipe unsuccessfully four times and, eventually, I called the author directly; we happened to know her. I asked, “Why is this dessert not working out?”

She answered, “Oh that? It’s because I used shaving cream for the picture.”

To me, that seems wrong; it’s not fair. I only use food. If I want something to look glossy, I’ll spray it with olive oil; if I want it to look roasted, I’ll brush on some soy sauce.

I do have some behind-the-scenes secrets, though. Let’s say I want to make a dish with chocolate look like it just came out of the oven, I’ll blow dry it on a low setting to melt the chocolate again. Similarly, if we took a dish out of the freezer, and we don’t have time to sit around and wait for it to heat to the perfect second, we’ll use the blow dryer to heat the top.

Y: Is it hard to find the perfect fruits and vegetables? There’s not much you can do to improve a simple pear or avocado.

RM: They’re the easiest! Hashem’s creations are the most perfect. Fruits and vegetables are so naturally beautiful, they always look gorgeous.

If you buy four avocadoes, you’re guaranteed to have at least one that is ripe and attractive. Produce was made for us to want to eat. The only thing I’ll do is sometimes spray them with a bit of water.

Much harder is chicken or meat. For those, I’ll undercook a bit, so it doesn’t look shriveled.

And traditional foods are a nightmare. Potato kugel, gefilte fish – for these, you try to distract the eye, put something pretty next to it, like herbs. Generally, when you add fresh greens, anything can look more appealing.

Y: Who cooks the food for the shoots?

For a packaging job, we usually work on site. I’ll go down to the warehouse and they’ll have their own chef bring me the food.

Other jobs, I cook.

I have a studio kitchen in my house where I work and store all of my props for the shoots. Strangely enough, some of the items that I use I wouldn’t actually consider kosher, because I might repurpose a tray from a milchige shoot for the next shoot’s chicken dish. It usually wouldn’t be very practical to use, anyway: there’s something like one plate, one fork and one serving spoon of each pattern.

Y: Does any particular shoot stand out in your memory?

RM: One that was very special for me was geared toward kids and used melted crayons as a backdrop. My daughter was four at the time and she was a part of the shoot by holding the crayons – only her hands were in the picture, but she was so excited for the magazine to come out to see her hands. She showed it to everyone we know.

With another shoot, I needed a wooden backdrop, so I purchased a wooden tabletop from Ikea. On my way out, the cashier came running after me that I forgot the table legs and I told her, “I don’t need the legs!” She is probably still scratching her head now wondering…

Y: Tell us a little bit about “Our Table,” your upcoming cookbook published by ArtScroll.

RM: My cookbook was an enjoyable opportunity to create new dishes and perfect the old favorites, while also utilizing my capacity for styling.

Showcasing the food in different, beautiful ways was something that I really wanted to do, so it’s exciting to have the opportunity.