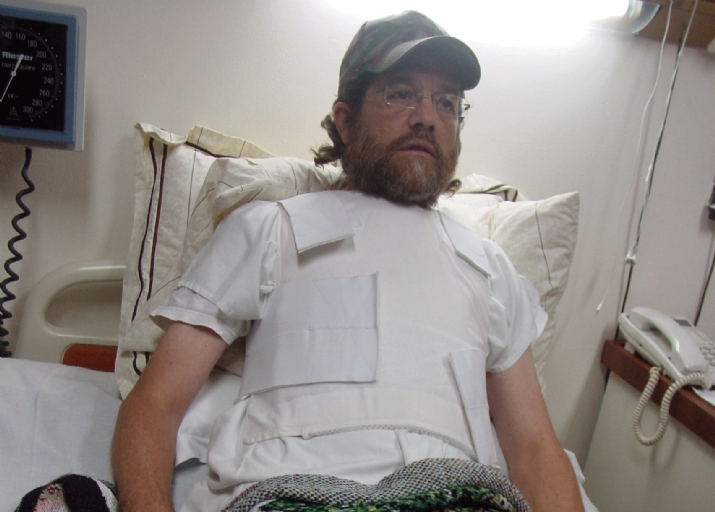 Seven Bolivian government officials were arrested last week after being accused of a plan to rob and extort Yanky Ostreicher, an American who has been jailed without charge in the South American country for 18 months. Yanky, a businessman from Brooklyn who has maintained his innocence, has long said that Bolivian officials targeted him for his successful rice growing venture they seized when he was arrested last year after being accused of money laundering.
At a press conference last week, Bolivia’s Interior Minister, Carlos Romero, announced the arrests of the seven officials, including the Interior Ministry’s director of legal affairs, Fernando Rivera, and the judge who first jailed Mr. Ostreicher.
Mr. Ostreicher has been held at the Palmasola prison since his arrest in June 2011. His wife, Miriam Ungar, has visited her husband at Palmasola, where there are no guards and prisoners govern themselves.

The 53-year-old former flooring contractor turned to growing rice in Bolivia in 2008 after a family friend told him it would be a promising investment opportunity. Yanky said he put $200,000, his life savings, into the venture and became a very junior partner in a $25 million project. Things went well for a year or so. The first harvest yielded nearly 40 million pounds of rice and more than 200 Bolivian workers were employed.

In 2011, Bolivian police arrested one of Mr. Ostreicher’s former employees and accused him of being involved with drug criminals. Mr. Ostreicher cooperated fully with police and then was arrested himself. Prosecutors claimed they were investigating whether the $25 million that started the rice business came from drug money, but they have yet to produce evidence to support their allegations.

Six days later, the judge reversed his decision and Mr. Ostreicher was sent back to prison. The judge was later promoted to the appellate court, further delaying proceedings.

Today, Mr. Ostreicher is in a Santa Cruz hospital after being diagnosed with Parkinson’s disease, but he remains in Bolivian police custody. Bolivian authorities said that Bolivian law allows for the incarceration of people without charge for up to 18 months.

Mr. Ostreicher has argued since shortly after his arrest that he has been the victim of corrupt Bolivian officials who conspired to keep him in jail so they could sell off the 18,000 metric tons of rice they confiscated from him and extort him in exchange for promises to obtain his release.

“It was deliberate, premeditated and the plan was to take everything away from me,” Mr. Ostreicher told The Associated Press.

He named as the “ringleader” of the alleged conspiracy the director of legal affairs in the Interior Ministry, Fernando Rivera, who was arrested last week in the eastern state of Tarija while on government business.

Mr. Ostreicher accused Rivera, the seventh official arrested in the case, of seeking a $50,000 bribe in order to secure his release from prison. He also accused Rivera of intimidating judges and prosecutors to keep him in jail despite a lack of evidence supporting the money-laundering allegations.

As director of legal affairs in the Interior Ministry, Rivera oversees major prosecutions, which include drug-trafficking cases. Bolivia is the world’s No. 3 cocaine producer and also a major transit country for Peruvian cocaine.

The other officials arrested in the case include a former top official in the presidential ministry, the judge who initially ordered Mr. Ostreicher freed last year only to reverse himself, and three officials of DIRCABI, the state agency that manages seized assets.

Interior Minister Romero said that those arrested were involved in “a network of corruption and extortion that has involved government officials, private individuals and possibly had connections with the judiciary.”

Although a subordinate of Romero, Rivera preceded him in the Interior Ministry, having been hired by a previous minister.

The former presidential ministry official, Jose Manuel Antezana, allegedly received a $9,900 commission from the illegal sale of some of Mr. Ostreicher’s rice, which was sold while ostensibly in DIRCABI’s possession.

Independent political analyst Roberto Laserna said that Mr. Ostreicher had, unfortunately, suffered from an affliction that Bolivians have also experienced: an inefficient, corruption-ridden legal system and a “counter-drug law that instead of presuming innocence, locks people up without any rights and seizes their assets, which later disappear.”

“If the government wants to clean up its image, it should arrest all involved,” he said.

Mr. Ostreicher says he was duped by the Colombian woman who initially managed the venture and who planted some of its rice on land owned by the brother of a Brazilian drug trafficker.

The reports of the arrests, however, are a welcome development in the case, said Congressman Smith.

“I am cautiously hopeful that this is a positive development and that Jacob is a step closer to freedom,” said Smith, chairman of a U.S. congressional subcommittee that oversees international human rights. “Justice delayed is justice denied, and justice has been delayed for a long time. Jacob has tried to work through the legal system, and has been patient beyond reasonable expectations. There simply is no evidence offered against him. The rule of law must prevail in Bolivia. Innocent people, especially and including Americans doing business in Bolivia, must have a path to justice. Jacob, an innocent American, must be released immediately.

“This case has grown into an international embarrassment for the Morales government that controls Bolivia,” Smith said.

Smith has vociferously criticized the Bolivian government’s direct and deliberate interference in the court proceedings as well as its total disregard for internationally-recognized judicial standards in the Ostreicher case and the confiscation of all the assets of his rice farming business.

Smith held an August 1 hearing titled “Seeking Freedom for American Trapped in Bolivian Prison,” which produced detailed information used in the introduction of Smith’s bill, “Jacob’s Law,” which takes aim at foreign government officials responsible for violations of human rights and fundamental due process procedures of imprisoned U.S. citizens by banning their travel to the U.S. Another hearing on the case was held in June. Smith also visited Mr. Ostreicher in June and attended a court proceeding disrupted by the Bolivian government. He additionally met with high-ranking officials in Bolivia as he sought assistance to secure Mr. Ostreicher’s release.

Smith was asked to become involved in the case by Mr. Ostreicher’s daughter, a Lakewood, NJ, resident who lives in Smith’s congressional district.

“What concerns us is that, despite the fact that no evidence has been shown linking Jacob Ostreicher with any crime, he has been detained for eighteen months and it is taking a toll on his health,” said Larry Memmott, Charge d’Affaires at the US Embassy in Brazil.

“In light of a report that seven Bolivian authorities – including the judge who sent Jacob Ostreicher to prison – have been arrested on charges of conspiring to rob and extort Mr. Ostreicher, I call for his immediate release on bail and a serious examination into the merits of this case,” said Nadler. “Mr. Ostreicher has been denied justice for far too long, and today’s events raise serious doubts about the charges against him, and about the intentions of those charged with meting out justice in his case.”

Following the recent developments in the case, Mr. Ostreicher has been placed under extremely tight security and has been wearing a bulletproof vest for his safety. Armed guards from both Venezuela and the office of the Bolivian president have been stationed outside his room.

The criminal groups to which the arrested officials are connected are motivated to take revenge on Mr. Ostreicher after his case has led to the uncovering of this ring of corruption. A source was reported as saying that Mr. Ostreicher’s life “is in greater danger now in the Santa Cruz clinic than it was in the Palmesola prison.”

The Ostreichers have five children and 11 grandchildren.

All are asked to daven for Yaakov Yehudah ben Shaindel.

The Associated Press contributed to this report.