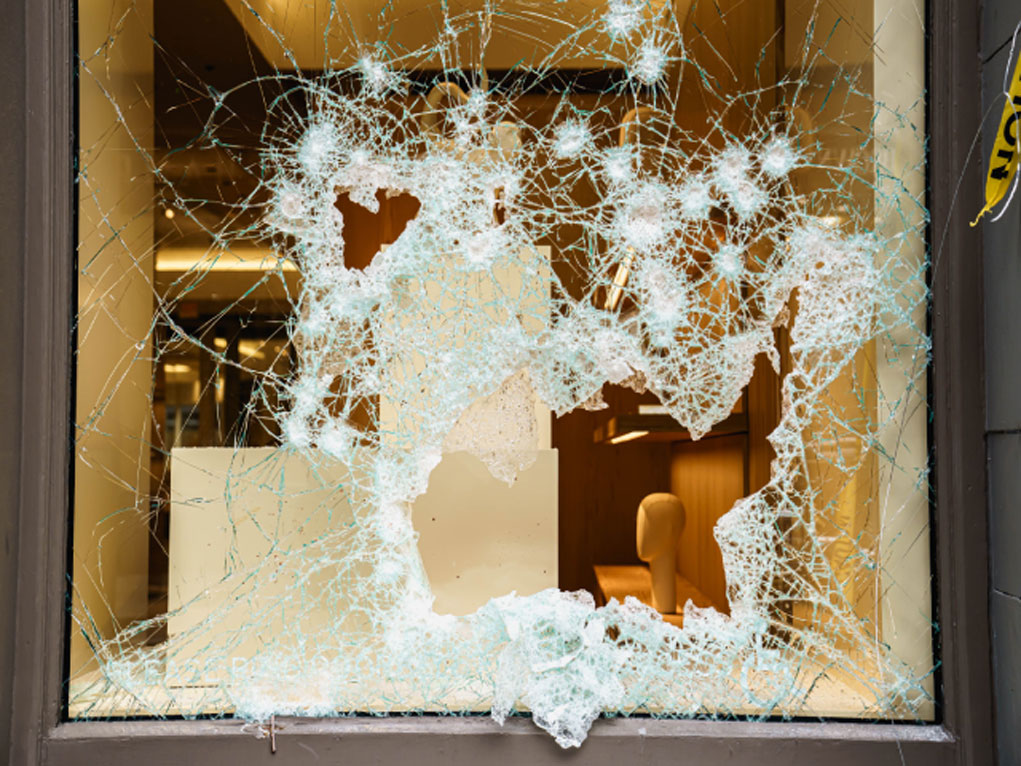 In 1982, sociologists James Q. Wilson and George Kelling proposed a “broken windows” theory of crime. They argued that a proliferation of broken windows in a neighborhood conveys the message: “Nobody cares. If you break more windows, no one is going to do anything about it – in short, anything goes.”

Over a decade later, New York City Mayor Rudolph Giuliani made the “broken windows” theory the cornerstone of his community policing initiative. Police enforced laws against jaywalking, removed squeegee men, painted over graffiti, removed street hustlers from the street, and even repaired windows. The result was that crime rates plummeted, particularly the homicide rate. And New York City became one of the safest, if not the safest, major city in the United States.

Now, many major American cities are testing the opposite of broken windows policing: What happens when the law enforcement authorities declare that property crimes will be treated as trivial, policemen are removed from the streets, and criminals, even violent ones, are returned to the street immediately after arrest, without worries about posting bail or pretrial detention?

That question is being posed by the actions of progressive prosecutors, whose election campaigns were financed, in part or in whole, by George Soros, elected in major cities across the United States – Baltimore, Philadelphia, Chicago, St. Louis, San Francisco, and, most recently, New York City – since 2016. Soros, who is as shrewd as he is malevolent, recognized that prosecutors wield immense power to implement radical change because their decisions are virtually review proof due to the doctrine of prosecutorial discretion. And he further understood that elections for district attorney are, in general, low visibility affairs, in which a little bit of money – certainly by Soros’s standards – can make a huge difference.

In the March 2020 edition of Commentary, Andrew McCarthy outlines the commonalities among these prosecutors. The common glue linking them together is the view that the justice system is rigged against minorities and designed to keep as many blacks as possible in prison. That intent is established, as they see it, by the disproportionate percentage of blacks prosecuted and imprisoned. (The possibility that those percentages have something to do with the percentages of crimes committed by blacks is not even on their radar screens.)

The solution, according to these progressive prosecutors, is to virtually rewrite the criminal code. For instance, Chesa Boudin, the San Francisco D.A., announced soon after his election that his office would no longer prosecute “quality of life” offenses. As a result, large swaths of the city quickly came to resemble a large outside toilet. He further created a special unit to defend undocumented aliens from criminal prosecutions that might result in deportation. Philadelphia D.A. Leonard Krasner, first elected in 2018, got around Pennsylvania’s minimum sentencing laws by refusing to include in indictments any of those factors triggering a mandatory minimum sentence – e.g., the use of a gun in the commission of the crime, the weight of the illegal drugs seized.

The most recently elected radical prosecutor, Alvin Bragg of Manhattan, issued a Day 1 memo to those serving under him that an armed robbery in a commercial setting would henceforth be downgraded to a misdemeanor, so long as the threat of force from a lethal weapon consisted of “displaying a dangerous instrument or similar behavior that does not create a genuine risk of physical harm.” The criminal statutes, however, make no such distinction out of a recognition that the possession and display of a lethal weapon always creates a risk of genuine harm.” Bragg also announced that his office would no longer indict on charges of resisting arrest, a step almost sure to increase violent confrontations between police officers and those apprehended.

Five days later, when a nineteen-year-old girl working late night at a Burger King in Harlem was shot and killed by a robber, even though she had already handed over everything in the cash register, Bragg had a change of heart, “If you go into the store in Manhattan and used a gun to rob that store, that is armed robbery, that is serious and we will be prosecuting armed robbery in Manhattan.” In addition, he announced that his office would, after all, be prosecuting violence against police officers.

Welcome as those retreats were, most of the Day 1 memo remained intact, including the decision to treat all defendants under 25 as cognitively equivalent to juveniles. And Bragg has not retreated from his commitment to making “incarceration a matter of last resort.” The City Journal’s Charles Fain Lehman summed up, “Only offenders who commit a very narrow set of offenses will face pretrial detention or post-trial incarceration.”

In addition to his election funding of radical prosecutors, Soros also contributed $50 million to the ACLU’s anti-incarceration campaign, whose greatest success was the abolition of cash bail for all “non-violent” crimes in New York. Gerod Woodberry serves as a poster child for the “success” of the project. He committed six bank robberies, in rapid succession, each time being released without posting bail for the preceding robbery. His threatening notes to the bank tellers were deemed “non-violent.”

So were Tiffany Harris’s physical assaults on three women at a Chanukah party in Crown Heights, accompanied by spewing anti-Semitic epithets. She was immediately released, only to sucker-punch another young woman in Prospect Heights the next day.

SO HOW HAS THE ANTI-BROKEN WINDOWS experiment gone? Just about as well as theory and common sense would have predicted. The results are not just a consequence of progressive prosecutors, but also of the anti-police movement that swept the country in the wake of the killing of George Floyd in May 2020 under the slogan “defund the police.” Thirty-eight states at present have upped the amounts required for felony theft to at least $1,000, and many even higher. As a result, retail theft has skyrocketed. By now, everyone has watched at least one video of mobs smashing the windows of luxury stores in San Francisco and its environs and simply emptying the stores. Major chains like Walgreens and Target have abandoned San Francisco altogether.

But what starts in San Francisco doesn’t stay there. “Smash and grab” attacks on stores have spread across the country. And increasingly, the perpetrators are professional gangs. The removal of cash bail in many jurisdictions has taken away another disincentive to crime. A character known as the Man of Steal was arrested 57 times in the first months of 2021 in Manhattan, and each time went back to stealing again.  There are at least 77 such repeat offenders on the streets of Manhattan. And again, chains like Right Aid are closing up stores even in upscale neighborhoods as a consequence of uncontrolled shoplifting.

Nationwide carjackings, almost all of them executed using lethal weapons, skyrocketed by as much as 510% in some larger cities in 2021, with 1,800 carjackings in Chicago alone. Two recent carjackings in Philadelphia ended with the murder of the car owner.

The broken windows theory predicts that fixing the windows will also bring down the murder rate. And the opposite turns out to be true as well: Take a lax attitude to lower level property crimes and the murder rate will go up too. That certainly has been the case over the last two years.

From 2019 to 2020, murders have increased 44% nationally. That increase resulted in the loss of approximately 10,000 black lives. Not surprisingly, then, every poll shows that a large majority of blacks are in favor of more policemen, not fewer, in their neighborhoods.

Twelve larger cities registered their highest murder levels ever in 2021, at least two of those cities for the second year running, and several others broke records that went all the way back to the high crime 1980s and early ‘90s. In those twelve cities, all had either experienced the slashing of millions of dollars from the police budget, or severe understaffing of the police departments, even where absolute police budgets remained the same.

At long last, some Democratic big city mayors have begun to notice that things are out of hand and the surge in crime cannot be allowed to continue. Ten months after overseeing a cut of $120 million from the police and sheriff’s departmental budgets, San Francisco Mayor London Breed gave a press conference to announce that rising crime had brought her to the “breaking point” as she watched her city fall under the “reign of criminals,” and as too many high-end stores had been the subjects of “mass looting events.”

But it is going to take a lot more than just a few mayors seeing the light. Eric Adams, an ex-cop, was elected mayor of New York City largely because he talked the toughest line on crime. But even though he is a Democrat, his efforts to reverse the state’s virtual ending of all cash bail, and the resultant increase in violent criminals on the street, went nowhere with his fellow Democratic lawmakers in Albany.

And then there is the question of how long demoralized police forces, which have largely withdrawn from the streets, will continue to put their lives on the line for a frequently ungrateful public. More cops were killed nationally in 2021 than in any year since 1993, many of them deliberately targeted. And already in the first month of 2022, thirty-three were shot and six killed in New York City alone.

Sadly, Wilson and Kelling’s insights have been fully vindicated.