The Root of Haman's Evil 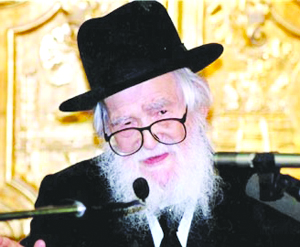 Based on Divrei Torah of Rav Elazar Menachem Man Schach Every year, the evening reading of the Megillah concludes with a recital of the piyut, Asher Heini. This briefly encapsulates the Purim story in poetical form: â€œHaman proclaimed the enmity of his fathers; he aroused the hatred of the brothers [Yaakov and Eisav] against the sons. He did not remember the mercies of Saul - for by [Shaul] having compassion on Agog, the enemy [Haman] was born.â€
To complain that Haman failed to remember the mercies of Shaul seems astounding. Surely this small ingratitude pales into nothingness compared to Haman’s heinous plot to destroy every Jew? Why does the piyut mention it at all?
BAD MIDDOS VERSUS ACTUAL SIN
The Torah devotes a lot of space to relating stories. It describes the deedsof its protagonists in great detail in order to emphasize the importance of midos. Studying the Torah carefully, we can learn which midos to encourage and which to avoid, which to nurture and which to uproot.

In a way, having bad midos is more severe than committing an actual sin. For there is a vast difference between a person who does an averah and someone who possesses bad midos; committing a sin only testifies that a person stumbled, perhaps momentarily, whereas bad midos are an intrinsic flaw in the person himself. A proud person, for example, is constantly prone to all the sins his bad midah leads to.

Similarly, the piyut recited after Keri’as Megillah is telling us that the root of Haman’s evil deeds was his plethora of bad midos. The piyut mentions his seemingly inconsequential lack of gratitude to tell us that with midos there is no such thing as inconsequential. The root of ingratitude is entitlement, the conviction that one deserves whatever comes one’s way. Feeling entitled to everything, and convinced that all his possessions were worthless so long as Mordechai refused to bow down to him, Haman felt perfectly justified in asking the king to remove his head.

In addition, Haman’s inability to enjoy his family and possessions so long as Mordechai existed is also a perfect example of how bad midos lead not only to evil deeds, but also to extremes of foolishness. Having created man with supreme intelligence, Hashem endowed him with an almost miraculous ability to cast aside his intelligence and behave with an utter disregard for logic and the consequences of his behavior in order to maintain his freedom of choice.

The unique ability of man to fool himself also led to the first murder of history.

What led to Kayin killing Hevel? According to one opinion of the Medrash Rabbah (Bereshis 22), each one wanted exclusive ownership of half the world to the exclusion of the other. Kayin took the world’s real estate and Hevel took everything that is moveable.

After making this agreement, Kayin said to Hevel, “Fly in the air, for you have no right to use my land!” Hevel replied, “Strip off your clothes, for all the movables of earth belong to me. This selfish behavior was utter foolishness. What did Kayin care if Hevel used a few inches of the complete planet that belonged to him? This is an example of how bad midos can strip a person of his intellect and lead to murder. (We should keep in mind that this discussion is according to our level of understanding. In reality, we have no conception of their lofty spiritual level).

Bad midos are also the prelude to twisted spiritual values.

Rabeinu Yonah (Shaarei Teshuvah 3:160) writes, “When people hate Hashem, their sin is visited upon their sons, grandsons, and great-grandsons.” Included in this category are not only absolutely wicked people, but also people who observe mitzvos and are scrupulous to avoid sin, but whose heart seethes with jealousy against those who seem more spiritually successful than they are. They cannot bear to see someone studying more than they do, and they hate to see people giving talmidei chachomim the honor they feel accrues to them. The resultant hatred of those who serve Hashem is tantamount to hating Hashem.

The medrash we cited earlier brings another opinion that the argument between Kayin and Hevel was a spiritual one. They agreed to divide the earth equally between the two of them, but could not agree in whose territory the future beis hamikdosh should stand. This argument, which seemed to hinge on the heights of spiritual sensitivity, led to brutal murder.

Dovid Hamelech writes in Tehillim (8:4),You made him [man] a little less than G-d. Sensing one’s immense spiritual potential can turn a person into a spiritual giant or into a giant megalomaniac; it all depends where his midos lead him. Chazal tell us that Timna, Pharaoh’s daughter, wanted to marry into Yaakov’s family, and when Yitzchak rejected her, she married into Eisav’s family instead (Sanhedrin 99b). Timna’s search for spirituality led to the evil and hatred of her descendants, Amalek, Agog, and Haman.

Celebrating our escape from Haman on Purim, we too must be careful not to fall into the same trap. We must infuse the simcha of Purim with the sublime spirituality it deserves and not allow our baser emotions to lead us astray.