The Power of the Hour 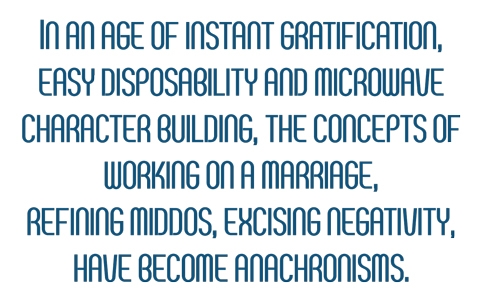 As the captivating chuppah tune began, Mrs. Mimi Segal's eyes welled up with tears. Her first grandchild was getting married tonight and many powerful emotions surfaced all evening. The pure, unadulterated happiness was so tangible, she could slice it. Marrying off one's own children was joyous enough, but viewing the grandchildren attaching new links in the family chain was total bliss. Powerful feelings of gratitude to the One Above surfaced as well, with intense force. But the overwhelming emotion for Mimi during the chuppah was sustained supplication begging Hashem to shower His blessing on this couple, on all her children, and on the extended families of Klal Yisroel.

As the chosson, and then the kallah, walked down the aisle to their position under the chuppah, the view of the couple was blurred as tears flowed down her face. She had spoken to her granddaughter earlier and advised her, “Faigy, think big. Daven for long term. The entire marriage is nourished by these tefillos. Be farsighted in your requests.”

Mimi found herself heeding her own advice to the bride. She was fascinated by the fact that she was able to focus and effectively block out planet Earth. Mimi thought, “This must be an additional benefit of being a bubby. I could allow myself the luxury of savoring the moment and understanding its potency.” As the mother of the chosson or kallah, she always had to juggle multitudes of tasks: arrange, accommodate, greet, make comfortable and daven. As the grandmother of the bride, the mission slimmed itself noticeably — the absolute joy without the pressures of the responsibility of the evening. When the answer cards came back in slow motion and the amount of guests could not be estimated, Mimi remained relaxed. When the apartment hunting looked fruitless and there was still no home address two weeks before the wedding date, Mimi remained at ease. She was joyous but untroubled by approaching deadlines.

When the mother of the kallah asked her own mother, Mimi, for a dose of that tranquility, she replied, “In order to be a grandmother you have to be a mother first. A mother has to spread herself thin, even taut, to accommodate everyone’s needs in maintaining a home, keeping a job, helping with homework, reports and tests and also making a wedding. A grandmother has the privilege of being outsourced.”

Mimi Segal, sitting in the reserved-for bubbies front row seat, understood, though, that in order to be there, you first had to get there.

Later that week, amidst the whirlwind of festivities, she had occasion to mull over that idea again. As she was being served and not serving, catered to and not catering, Mimi realized that this rule of arrival transfers itself in all areas.

In an age of instant gratification, easy disposability and microwave character building, the concepts of working on a marriage, refining middos, excising negativity, have become anachronisms. “We all want to be there. Very few of us want to work hard to get there. But you have to live through in order to arrive,” Mimi thought wryly.

After the week of celebrations, life returned to its customary regularity: homemaking and teaching.

In school, Mrs. Segal was immersed in a topic with her Seminary students. The theme centered on the art of restraint and the power of silence in the creation of a home. The class had delved into the topic of Rochel Imeinu’s silent stance on the eve of her wedding. They learned the relevant meforshim on the topic, and her ultimate sacrifice to her sister who was wed in her place. They read the medrash depicting Rochel’s pleas before Hashem to redeem His children and His response that her restraint and sacrifice would reap boundless rewards. They also heard practical examples of using restraint in their own future marriages.

Mimi was looking forward to finishing this particular booklet. She had found a very powerful story that applied to this very topic. She had also received a CD from one of her students with a song based on the entire lengthy medrash. The tune was hauntingly beautiful and it was the perfect way to close the topic.

Late that night, Mimi received a phone call from a fellow teacher. She had heard that Mimi was planning to use that song in her final lesson the next day. The teacher on the phone told her she was also planning to use the same Rochel Imeinu song for her class, based on her own lesson.

Mimi wanted to be the gracious educator and relinquish the rights to the song, but she found herself floundering. “How can I be selfless here if my lesson suffers. The climax of the ten-page medrash will be diminished if I don’t end off with that inspirational song. The impact of the whole booklet will lessen,” she thought to herself. Attempting to speak gently but firmly, she made it clear that she would rather have the song remain in her classroom.

Mimi attempted to prepare for school, but she was too tired to think clearly and promptly fell asleep. In the middle of the night, she woke up with a start. She had a startling realization that struck her like a bolt of lightning. She was completing the booklet on being mevater, citing Rochel Imeinu as the personification of that theme. Rochel was prepared to give up her intended marriage, her future, her eternity, to save her sister from disgrace. Mimi Segal had taught and analyzed the topic; she had even brought stories to make it relevant. But when her colleague had asked for a minor concession, she was hesitant to do it! It was one thing to theoretically delve into all the aspects of giving up for another, it was another story when it hits you personally.

Her own words echoed back from several weeks before — “In order to be there, you have to get there.” The revealing power of that hour hit her with a resounding thud. One could preach and teach and express volumes about character development, but flaws have to be confronted, worked on and refined to develop a new reality. You can’t be there unless you work tirelessly to get there. You can’t be proven until you’re tested. You can’t be experienced before you’re an amateur. You can’t end up before you start out. You have to fall, get up, get lost, recalculate, before your reach your ultimate destination. You can’t be a grandmother before you are a mother.