The Plane Truth: the Hidden Miracles we experience all the time 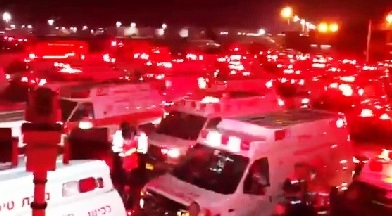 In days of old, when tragedy struck in a distant shtetl, it took months, or even years, for the news to travel. Often family members living in a village just two miles away were oblivious to the trauma their loved ones were experiencing, even days afterward. The advent of the telegram and postal service meant that messages could get through, but it took a while. Eventually, people heard what they needed to hear, often long after it was â€˜old news.' News of births, weddings, the passing of a loved oneâ€¦.these filtered out slowly, conveyed by letter or personal messenger. Nowadays, thanks to the wonders of modern technology, news from anywhere in the world becomes instantly relayed to us, even as it is unfolding. Such was the situation on Sunday evening, when tens of thousands of acheinu Bnei Yisroel were glued to their phones and/or computers, sharing a sense of foreboding and panic.
What had happened? An El Al flight, leaving from Eretz Yisroel shortly after Lag B’omer, developed landing gear trouble, and was hovering in the air, dumping fuel before its rough landing.

Visions of a plane belly flopping onto the runway, engine bursting into flames….of potentially hundreds of wounded, or worse, send shudders of terror down our collective spines. We rushed to our sefer Tehillims, crying, pleading with Hashem to save our brothers and sisters on that plane.

Many people knew someone….a relative, friend or acquaintance who was on the flight. My uncle, a father and grandfather of a large family, was on the flight as well. Mercifully, his wife was not informed about the situation until the plane was safely on the ground.

The news was updated every moment: the plane will land in a half hour….fifteen minutes….five minutes left to go. The airport was filled with emergency vehicles, waiting ominously for what might be a crash landing.

I sat with my tehillim in hand, crying bitterly, imagining the emotions of the people on the ill-fated flight. What were they thinking? What emotions were coursing through their minds as they contemplated what might well be their last moments on this earth?

“What would you think if you were on that flight?” I asked myself, and shuddered in horror. “How would you fill what might have been your last moments?”

These horrific thoughts were interrupted by the exultant shouts of my children. “Ma, guess what? The airplane landed safely B”H. No one is hurt!”

In an instant, euphoria and gratitude replaced anxiety and despair. I felt reborn, rejuvenated, filled with unspeakable emotion. I imagined that my feelings were magnified a thousand fold by the people on that plane.

It was only the following afternoon, when I had an opportunity to speak to my uncle that I discovered my emotions were hardly shared by the passengers. As my uncle explained, “the passengers on the plane were not as scared as the rest of the world.”

“You have to understand that we were flying in the air. We had no access to kol mevaser or to news reports. We had no way of knowing that there were hundreds of ambulances waiting for our supposed ‘crash landing,’ or that the landing gear was faulty. All we knew was what the pilot told us.”

“So there was no mass hysteria, no crying ‘shema Yisroel?’

“Nothing of the sort. We had been in the air for about half an hour, when the pilot announced that there was a landing gear problem, and that we were heading back to the airport. Later he said that the decision was made to circle for a few hours, until it was daylight, and the landing would be easier. Those four hours went by very quickly. Some of the passengers saw military planes nearby, but most didn’t notice anything was wrong.

“The atmosphere was very calm and controlled. There was no panic, no sense that we were in danger. I think the people on the ground were more afraid than we were.”

I found reality hard to digest. You mean many of us were terrified, crying and saying tehillim, while the passengers who were in the air were mostly oblivious?

The paradox brought to mind the ma’amar, “ain odom makir b’niso…” not always does a person recognize the miracles that happen him. He might be making his merry way down the street, when out of nowhere, a car comes barreling down, straight toward him, missing him by an inch. After drawing back in shock, he continues on his way, not realizing that the car was, in fact, supposed to hit him. The decree had been sealed on Rosh Hashonoh, but was annulled when he did an extraordinary act of chesed earlier that morning.

Sometimes the miracles that happen to us are only obvious to those around us, while we remain blissfully ignorant of the dangers we face. One example of this is the toddler who ventures out onto a busy road, and is rescued in the nick of time. Or a patient, undergoing ‘routine surgery,’ whose family members know the truth about his condition, while he remains oblivious. Later, when he recovers, he wonders why those around him are so euphoric at the successful completion of a minor operation.

This idea was demonstrated this past Sunday, when, although the airline assured the passengers that they had not been in any danger, the ‘could have beens’ and ‘what ifs’ frightened us all. To discover that the heart- stopping moments most of Klal Yisroel shared were not felt by those directly affected was an epiphany of sorts.

May we continue to merit Hashem’s kindness, and the ability to thank Him for the miracles He bestows upon us, both hidden and revealed.