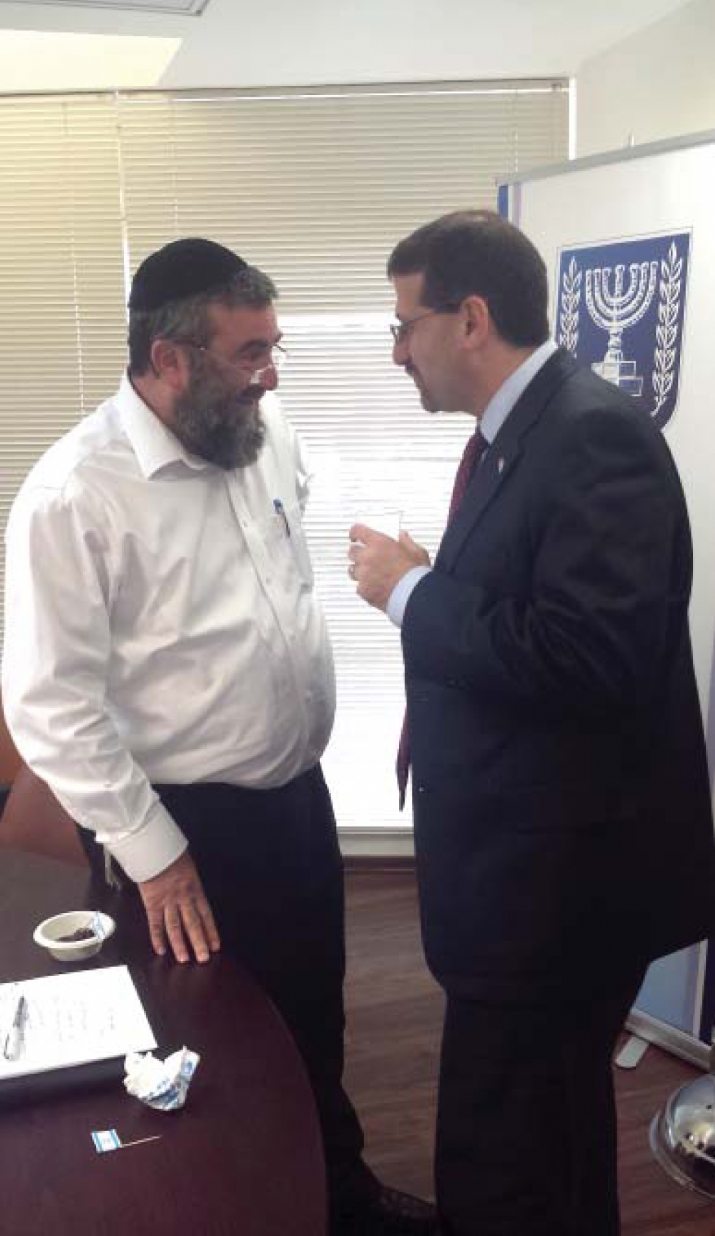 Over the past two weeks, Dan Shapiro, American ambassador to Israel, has been holding a series of marathon meetings with Knesset members from every party. His goal is to pave the way for presenting the American position that Israel must give in on some of its basic principles, as a result of the slowdown in the political process ceaselessly promoted by John Kerry. Both last week and two weeks ago, the ambassador and his staff, including the deputy ambassador and the consul general, came to the Knesset building for a series of prearranged meetings with members of the Knesset. He met with the most extreme right-wing political group, the Lobby for the State of Israel.

Ambassador Shapiro did not hesitate to enter the “lion’s den” and face the ministers on the right, who are viewed as extremists even within the Likud party and are considered in opposition to Netanyahu. Tuesday’s meeting was attended by a group including Yariv Levin, a Knesset member known for his right-wing views; Orit Struk, a representative of the most right-wing section of the Bayit Yehudi party; Tzipi Hotovely, a deputy minister from Likud; and former Knesset Chairman Ruvi Rivlin, a native of Yerushalayim who is known for his adamant refusal even to hear about concessions in the holy city.

Shapiro received some harsh responses from the group, but he maintained his equilibrium, speaking to everyone diplomatically with measured words. At the same time, he was very firm about the American position.

Responding to complaints about American pressure on Israel, Shapiro demanded, “Why is it that when America advances a goal that Israel shares, and that most Israeli citizens support [i.e., reaching a peace agreement with the Palestinians], it’s called pressure?” He pointed out that all of Israel’s prime ministers have professed their commitment to peace. “Even the current prime minister, Benjamin Netanyahu, told the American government immediately after his election that he is interested in negotiating with the Palestinians. We tried to advance an agreement during President Obama’s first term, and we failed. Now that he has been elected for a second term, we have decided to try again to make progress. After all, that is what you asked for. The negotiations have to take us somewhere. You can’t be interested in negotiating only on the condition that it doesn’t lead to a solution.”

Responding to the officials’ claims that the State of Israel has a right to every part of Eretz Yisroel, he said, “Your connection to every part of this land is clear, including Chevron and Sh’chem. It’s enough just to look at a Tanach to see that. But you must remember that there is another nation here, the Palestinians, and it is clear that the two of you cannot live together in the same state.”

He then addressed the subject of America’s obligation to defend Israel. “Every day, in every capital city in the world, at every point in time, and in every government office in Washington, an American team sits at every moment and fights those who are seeking to do harm to you. We are also working to eradicate anti-Semitism. You see, then, that your claim that Kerry is motivated by anti-Semitism is false!” he added in a pained voice. But he then proceeded to emphasize that, despite America’s commitment to stand at Israel’s side, “We don’t have the ability to stop every anti-Israeli initiative. There are some that we don’t have to power to stop, despite our intentions and our best efforts.” With regard to Yerushalayim, the ambassador says there are no understandings on the issue yet. “But it’s definitely one of the core issues,” he adds. “Every Israeli government has known that.”

The next subject to be raised is the issue of Jonathan Pollard, a subject that has come up in every one of his conversations. Knesset members spoke passionately, arguing that Pollard had been sentenced to a disproportionate punishment that did not fit his crime. They pointed out that even officials in the American government have admitted that Pollard was given an excessive sentence and should be released.

Shapiro was not fazed. “I understand your anger, and I can’t say that it isn’t a sensitive subject. But you have a lack of understanding in two areas. First of all, you don’t realize that from the American perspective, as well, this is a sensitive topic. True, there are some who support releasing him, but there are also other opinions. Some people argue, ‘Why should we release him? He is an American citizen, and he was only an American citizen at the time. Even if he has Israeli citizenship today, he harmed us and was punished, so why should he be freed?’”

MK Shuli Mualem (Bayit Yehudi), whose husband, Lieutenant Colonel Moshe Mualem, was killed in a helicopter tragedy 16 years ago, interrupted the ambassador in the middle of his monologue to say, “Dennis Ross reveals in his book that President Clinton was supposed to release Pollard as a ‘gift’ to Israel, in recognition of the concessions made at the Wye Plantation talks, but one of his assistants advised him at the last minute to refrain from freeing him, so that he could serve as a bargaining chip in future negotiations.”

Shapiro replied, “I was not privy to those discussions, so I can’t respond to that. I know only that Clinton did not release him because there was significant opposition to letting him go.” Shapiro moves on to the second “misunderstanding” that he feels the Israelis harbor with regard to Pollard. “We view this subject as a judicial matter, not a political one. Jonathan Pollard is an American citizen who served in a sensitive position and broke the law. That fact is not in dispute. He was tried in our judicial system, which is a very good judicial system, even if it has its flaws, as every system does. He received his sentence from the court, and he is now in prison, in keeping with that sentence. Presidential clemency is an unusual measure. It is very much out of the ordinary for a president to make the statement that he knows better than the courts.”

MK Orit Struk grew angry at this point. Although she herself had previously asked that the ambassador not be interrupted, she could not hold herself back. “Please don’t answer us in such an unintelligent fashion,” she interjected. “We know that there has been clemency in the United States in the past.”

Rubi Rivlin also spoke up. “There isn’t a single American citizen who has sat in prison in the United States for 30 years. If Israel held a person in prison for that long, you would tell us we were inhumane.”

It was clear that Dan Shapiro is not used to this type of confrontation. He was slightly flustered, but he continued where he left off. “The president has the power to grant clemency. President Obama almost never uses that power. There is a process. Every American has rights, and there is a process that determines when those rights are exercised. But your expectation that he will simply get up one morning and decide to grant clemency to Pollard is misplaced. That isn’t the way our system works.”

An Ethiopian-born Knesset member chimed in, “It would be a show of your greatness if you would have mercy on him.”

Shapiro responded, “You see, that is another proof of the misunderstanding between us. The president is not simply going to get up one day and grant clemency. There is a system in place, and there are courts. Even though it is a very painful matter, and I understand the pain, I want you to understand that this does not affect our commitment to Israel’s security. I hope that you will help the citizens of Israel to understand that even when there are differences of opinion, even major differences and even on a sensitive subject such as Pollard, those differences do not define our relationship. There are much more comprehensive tests of the relations between our two countries, and we are constantly proving our commitment to Israel.”