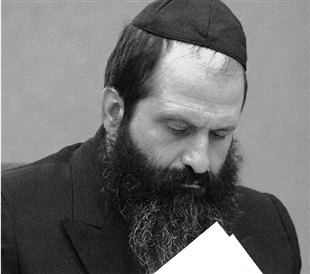 In a sharply worded brief to the 8th Circuit Court of Appeals, Sholom Mordechai Rubashkin's lawyers, led by Mark Weinhardt, challenged the three-judge panel's rejection of the appeal and asked the full court to review the decision. The brief, filed on October 11, pinpointed the breakdown of logic in the panel's decision, spelling out how it clashed with decisions by the United States Supreme Court and was inconsistent with previous rulings by the 8th Court itself. The 8th Circuit panel of three judges had rejected the appeal's lynchpin argument that called for a new trial following the discovery that trial judge Linda Reade had collaborated with Iowa federal prosecutors. That pre-trial collusion invalidated the trial, the conviction and the sentencing, the appeal argued.

Does It Matter Whether A Judge Is Crooked?

Without challenging the evidence of improper collaboration, and turning their backs on a chorus of eminent legal voices crying foul, the appeals court judges said the evidence didn’t count because it came too late. Furthermore, they said, only evidence that can prove innocence is admissible in a new-trial motion.

Weinhardt’s brief attacked the flawed logic and injustice behind this stance. “That means that if a convicted defendant obtains a videotape showing his trial judge taking a bribe from the government’s lead witness, he will still be unable to secure a new trial” (because, crooked judge or not, no new evidence of innocence has been presented).

The injustice of such a ruling is self-evident, the brief said. “The defendant in such a case should not have to satisfy the severe burden of demonstrating the newly evidence would probably have led to acquittal. Neither logic nor law support this position.”

The defense brief also challenged the panel’s ruling that even if allegations of improper involvement with prosecutors were true, Sholom Mordechai had failed to show that the collusion with prosecutors biased the judge against him.

“Judicial bias can manifest itself in ways that evade detection,” the Weinhardt brief argued back. Since a judge has enormous leeway in discretionary rulings, he or she can easily influence the trial’s outcome while cloaking bias in deceptive legal maneuvers. Forcing a defendant who has shown evidence of judicial and prosecutorial collusion to climb into the judge’s head, as it were, and prove precisely how the collusion slanted the trial, is unreasonable.

Lead appellate attorney Nathan Lewin faced down a similarly unreasonable mindset from the panel at the June appeal hearing.

Judge Reade’s clandestine involvement, uncovered by the ICE memoranda, was sufficient to wipe out the trial purely on the grounds of “appearance of bias,” he had argued to them, noting that the law’s overarching goal is to ensure both the appearance and reality of a fair judicial process.

But the panel, in its decision, totally ignored the issue of “appearance of bias.” It rushed to Reade’s defense, insisting that the defense failed to prove that Reade should have recused herself due to “actual bias.”

Lewin was asked by Judge Riley at the June appeal hearing whether he could show evidence of prejudice in Judge Reade’s trial rulings that arose from her pre-raid meetings with prosecutors. Lewin answered that while he had no concrete evidenceof prejudice, implications of bias run straight through numerous rulings that harmed the defendant at trial.

The judges, in their opinion, pounced on his statement, taking it out of context and using it as grounds to reject the appeal.

“…We find no evidence that Judge Reade’s decision to remain on the case prejudiced Rubashkin’s verdict,” the panel said, pointing to Lewin’s failure to show evidence of actual bias.

The court’s opinion denies a fundamental truth about human nature, Lewin later said in an interview with Yated. “It’s axiomatic that a judge who should be recused but remains on the case is bound to cause the defendant harm. But can I prove it in the sense of pointing to a letter, an email, a verbal statement of malice? No, I can’t. But that is not the issue.”

The controlling issue, he pointed out, citing strong legal precedents, is whether the judge’s neutrality would be doubted by the “average person on the street” hearing of the judge’s psychological investment in the law enforcement operation.

Would Reade’s Neutrality Be Doubted By The Average Person On The Street?

That brings one directly to the question of how one can determine what in fact would be the reaction of the average person on the street. The 8th Circuit totally sidestepped this question, as if it had never been posed, although it supports a key argument in the appeal. But 47 members of the House of Representatives gave a resounding, unequivocal response to the question when they separately wrote to Attorney General Eric Holder about their concerns.

As “average people on the street,” these congressmen – 27 Democrats and 20 Republicans – were troubled by the overwhelming appearance of impropriety in the case, and urged Holder to investigate the prosecution of Sholom Mordechai.

If that isn’t sufficient indication of the reaction of “the average person on the street,” consider the letter signed by 75 law professors and former DOJ prosecutors, who wrote to the Department of Justice in July about their concerns, asking them to “investigate prosecutorial misconduct in the case of United States vs. Sholom Rubashkin.”

“We are writing to ask that you turn an unsparing focus on the troubling evidence of prosecutorial misconduct in the federal prosecution of Sholom Rubashkin,” the signatories said.

Because of the secrecy cloaking the communications between the judge and the prosecutors, “we are not privy to critical information about these meetings, including their number, nature and detailed account of what was discussed. But what we do know is deeply troubling,” the letter stated.

“These factors and the severity of the sentence imposed on Mr. Rubashkin warrant, at a minimum, an expeditious investigation by the Department of Justice,” the authors wrote.

The letter noted that “while the ICE documents do not provide a complete picture of what transpired at these meetings, they raise serious questions about the extent of Judge Reade’s involvement in the planning of the raid and the prosecutions that stemmed from it, including that of Mr. Rubashkin.”

“Remove The Cloud That Is Growing Publicly”

The letter from the 75 law professors and former DOJ prosecutors also noted the cavalier refusal of either Reade of the U.S. Attorney’s Office to provide a full account of the secret meetings. They said that the “cursory and dismissive manner in which both parties have responded to requests for greater information and transparency have only underscored our concerns.”

The authors were outspoken about the injustice dealt Sholom Mordechai by the decision of the judge and prosecutors “to conceal their ex parte contacts from him so that he was unable to move for the judge’s recusal.”

The result of these maneuvers “was unquestionably unjust,” they said, concluding with a strong call for “a full and prompt investigation…in order to remove the cloud that is growing publicly and in judicial circles about the mattes we’ve described here.”

“The cloud that is growing publicly” has prompted tens of thousands of people to sign the White House Rubashkin petition on the We the People website, an effort launched by the White House to monitor issues of pressing concern to Americans.

The petition that has surged to almost 52,000 names calls on President Barack Obama to investigate the Rubashkin case for judicial and prosecutorial misconduct. As the second most popular petition on the White House petition site, it puts on graphic display the growing perception among “average people on the street” of justice run amok in the Rubashkin case.

The petition signatories reflect a cross-section of concerned citizens from across the width and breadth of the country. While many hail from Jewish communities on the East Coast, an array of names appear from almost every state, including California, Florida, Maryland, Washington, Colorado, Kentucky, Texas, Montana, Delaware, Iowa, Georgia, Illinois, Massachusetts, Arkansas, Florida, Missouri, Rhode Island, Vermont, Connecticut and many more.

“The petition listed its goal as 5,000 signatures by October 22 when it was created a month earlier and posted on the White House’s We the People website,” reported JTA. “It has since garnered 10 times its anticipated goal.”

“The petition calls on Obama to take prompt and effective steps to correct the gross injustice that has been perpetrated with the federal prosecution of Sholom Rubashkin,” the article noted.

People are troubled as much by the secret collusion between a federal judge and prosecutors as by the unwarranted sentence disparity between Sholom Mordechai’s 27-year sentence and the vastly lower sentences of defendants in similar situations.

The most recent appellate brief highlights this disparity, asking the 8th Court to review the failure of the three-judge panel to address this part of the appeal, and noting Judge Reade’s failure to explain or defend it in her own writings.

If one needed any further indication of how the average person on the street views the case, the Rubashkin petition with its 52,000 names puts that question to rest. It also raises another troubling one, part of the growing cloud surrounding the case: How could the three-judge panel of the 8th Circuit have turned its back so brazenly on the facts, fairness and logic? How did the panel feel comfortable ignoring an influential and growing chorus of legal and judicial experts all crying foul?