The Role of Responsible Frum Media 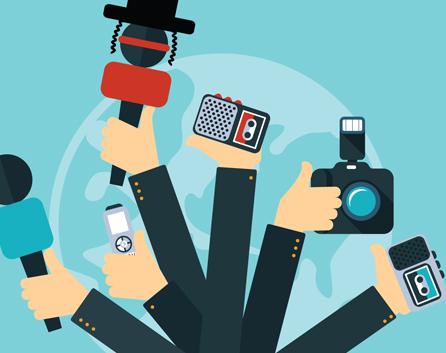 Because of the proliferation of “frum” outlets, both online and offline, it appears that we have lost the very defined, hashkafically clear role of what a frum media outlet is supposed to do and the understanding of the very nature of frum journalism.

The fact that we live in a world that worships egalitarianism and equality causes many to think that the frum press should be an echo of the general press: Just like they have their reporters who report to their community – just like Hispanics have Univision and the African-American community has black news outlets – so must frum publications have their own media, and aside from the fact that they run stories that are of interest to their specific demographics, there really is no difference.

Nothing could be further from the truth. In fact, those who do not understand the role of the frum press may inadvertently be placing Klal Yisroel and especially the visibly Torah-observant community in a compromised position. It is imperative for anyone who is part of “frum media” to have a basic understanding of their role and how our sages over the last 150 years since the advent of frum media have taught us what frum media is and what it isn’t. They must realize how critical it is for any media outlet identified as “frum” to realize the magnitude of the responsibility they carry.

The Beginning of Frum Media

Perhaps we should start at the beginning. What is the purpose of a frum publication? Why can’t we just get our news from an all-news outlet? Are frum publications supposed to be entertainment venues as well? What about sensationalism?

For the answer to those questions, we have to go back in time to the beginning of the era of frum publications in the late 1800s and early 1900s. In truth, when we look at this issue with a modicum of depth of thought and an eye to hashkofah, we should be asking ourselves: Why are frum people involved in the news business at all? Why are there certain publications that are associated with gedolei Yisroel who supported them and even sponsored them? Did the greatest, holiest sages of Klal Yisroel have nothing better to do with their time than associate with the press?

The answer is that there is a very defined ideal of a frum publication. A truly frum publication that practices frum journalism as envisioned by the gedolei Yisroel who established the early frum publications is not simply an outlet that runs stories appealing to the frum reader. In fact, frum journalism must be responsible. It must avoid leitzonus and heresy. It must avoid anything even remotely associated with immorality and, perhaps most of all, be cognizant that we are in golus, and anything that we write, anything that we report on, any statement by our editors and reporters, is in the public view and reflects positively or negatively on us as a community. Moreover, as Jews in golus, it is imperative that we behave with tznius and restraint, not attracting undue attention.

The Gedolim’s View of Frum Journalism and its Purpose

The initial purpose of frum journalism was to ensure that Maskilim do not gain a foothold in the hearts and minds of G-d-fearing Jews through the presence of their publications in frum homes. In those times, the Maskilim used the sacred nature of the Jews’ attachment to the printed word to establish publications ridiculing Yiddishkeit, thereby cooling off the naturally warm feelings that the majority of Jews had to Hashem and His Torah.

Fast forward some years and a wonderful thing occurred. As the frum community developed and grew, an amazing transformation occurred. The ideal that one does not bring a non-frum paper into one’s home became so mainstream that multitudes don’t bring any other publications into their homes.

How, then, do unscrupulous people, for reasons of self-interest or to increase their market share, smuggle alien concepts into the frum home? They do it under the guise of publications designed for the charedi community.

What a Frum Newspaper Should and Shouldn’t Contain

But what should be contained in a frum publication?

It is clear from several letters on the subject written by the Imrei Emes and other gedolim that, first and foremost, it must be a source of clean news. In a seminal letter dated 1917 (Osef Michtovim 71), the Imrei Emes states, “I have spent a long time toiling and laboring to establish a newspaper written in the spirit of Yiddishkeit free of words of heresy and nivul peh.”

Also, it is important to understand that not everything in a newspaper is kosher and has the stamp of gedolei Yisroel. The Imrei Emes writes, “Nobody should think that by my endorsement of the paper, I therefore agree with the political stances with regard to various countries that the publisher prints. I do not get involved in these issues, and the opinions expressed are those of the publisher. My main purpose is that there should be no nivul peh and heresy contained therein.”

After all is said and done, a newspaper must be a vehicle free of what constitutes lashon hora, nivul peh and heresy, ideas and ideals that are contrary to the Torah.

The Machzikei Hadas paper was established in Galicia during the latter part of the 1800s. In a fascinating letter that offers insight into the purpose of the paper and its hashkofah, the editors wrote to Rav Yaakov Lipschutz, personal secretary of Rav Yitzchok Elchonon Spector in Kovna, who was a prolific writer, asking him to pen articles, to recommend other writers, and to direct them as to which writers were completely kosher and which were already tainted by the winds of Haskollah. “We completely rely upon your recommendation, because we have found you to be a loyal, trustworthy friend of Machzikei Hadas…”

There is a large amount of material from gedolim of yesteryear about the purpose of frum newspapers, but space constraints don’t allow for elaboration. For more, please see Yated Ne’eman’s 20th Anniversary Book, where an entire chapter is devoted to that issue.

The Metamorphosis of Frum Journalism

Boruch Hashem, whereas once upon a time, all kinds of questionable, non-Jewish magazines and newspapers found their way into the Jewish home, today there is much less of that. The plethora of frum publications now offer the frum reader plenty of reading material without having to resort to other stuff.

Unfortunately, however, today, there are publications that are called “chareidi,” “heimish” or “frum” that do not conform to these ideals. It is tragic that the entire premise upon which frum journalism was established has been turned on its head. Now, the very instrument that was established to save multitudes from ideas that cool them off from Hashem and His Torah are now being used at times to do just that: cool people off from Hashem.

Although it is not an exact parallel, it is somewhat reminiscent of the tremendous opposition that discerning rabbonim had to the “biur” written by Moses Mendelsohn. There were those who could not understand what could be wrong with a German translation and explanation of the Torah. Those rabbonim with far-reaching views understood that the biur wasn’t written to teach Torah to Jews, but to teach German to G-d-fearing Jews, thereby luring them into German culture.

Remembering that We Are in Golus

Two important takeaways: Firstly, we cannot forget that we are in golus. During our terrible golus in Eastern Europe, we did not have to be reminded that we were in golus. Every time a Jew walked in the street, he was faced with Jew-hatred. It was not uncommon for Jews to be ridiculed and beaten. Yidden from Poland or Russia understood that anti-Semitism was a fact of life and did whatever they could to keep a low profile. The less attention they attracted from the host culture, the better. Being out of the limelight was the greatest assurance that the Jew would be able to live in relative peace.

Today, although boruch Hashem we live in an extremely benevolent golus, the halacha that there will always be anti-Semitism has not changed. Contrary to popular opinion, Moshiach has not yet arrived, and drawing unwarranted attention to ourselves and our lifestyle could be dangerous. It is not for nothing that our sages recommended that anytime we deal with figures in power, we should first learn Parshas Vayishlach, the template for how Yaakov must conduct himself when forced to deal with Eisav.

The second takeaway relates to being a discerning consumer when patronizing frum media. Twice a day, we recite Shema, wherein we say, “Lo sosuru acharei levavchem v’acharei eineichem – Do not stray after your heart and after your eyes.” Chazal teach us that your heart refers to heresy and your eyes refer to immorality. While most of our publications do maintain an “acharei eineichem standard,” many do not have a uniform “acharei levavechem standard.” We are sent all kinds of messages that border on Haskallah, kochi v’otzem yodi, and the elevation of unbridled, conspicuous consumption and hedonism. Sensationalism and hero-worship of people who are the opposite of true role models are at times featured.

Sadly, Haskollah, at least the 21st-century version, is thriving in our times in some chareidi media outlets.

In closing, let me conclude that in our times, there are all kinds of ads for clothing, food outlets, and jewelry stores that advertise for the “discriminating customer” or the “discerning consumer.” If we know what is good for us and what is good for our children, it is high time we become discerning and discriminating consumers of news and recreational reading as well.