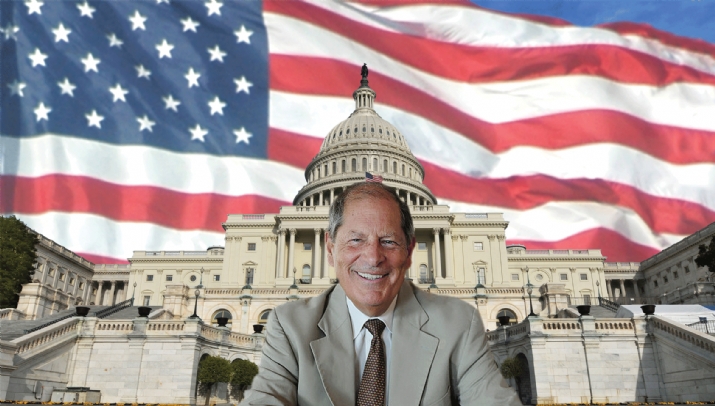 Tuesday night after midnight, cell phones were crackling across Brooklyn, Queens, and the entire country as people were calling and texting each other spreading the big news. In a result which has sent shock waves across the nation, political novice Bob Turner (R) defeated state Assemblyman David Weprin (D) in the special election for the House seat held by former New York Rep. Anthony Weiner (D). Turner's victory is a major upset given the Democratic history of the 9th district, which takes in portions of Brooklyn and Queens, as well as the fact that President Obama carried the seat by 11 points in 2008. Turner focused like a laser on Obama and his failing policies. As an indication of how far-fetched this victory seemed merely two weeks ago, Yated Ne'eman was the only Jewish newspaper to endorse Turner.

Although the district may well be eliminated by Empire State line-drawers tasked with cutting down New York’s congressional delegation by two seats before 2012, the result will buoy Republicans hopes heading into 2012 and spur anxiety among Democrats.

The New York seat, which was vacated by Anthony Weiner earlier this year, was initially considered safe for Democrats who a 3-to-1 registration advantage in the district.

Republicans turned the race into a referendum on President Obama, tying Weprin to the unpopular commander-in-chief at every turn. Obama’s approval rating is at 43 percent in the district, according to a survey conducted by Siena Research Institute.

Voter frustration over the sour economy and President Barack Obama’s policies made the improbable a reality. The surprising results in the Brooklyn and Queens-area district portend a perilous national environment for Obama as he prepares to seek re-election next year.

Turner said as much when he stepped before cameras to claim victory Tuesday night.

“This message will resound for a full year. It will resound into 2012,” said Turner. “Maybe we started something. I sure hope so.” “We’ve been told this is a referendum and we’re ready to say, ‘Mr. President, we are on the wrong track,” he said.

“We’ve been asked by the people of this district to send a message to Washington and I hope they hear it loud and clear. We only hope that our voices are heard. We can start putting things right again.”

A classless loser, Weprin refused to concede Tuesday night, telling his supporters, “This is not over yet. It’s going to be a long night, there’s still a lot of votes to be counted.” By Wednesday morning he had no choice but to admit defeat.

The national mood has darkened since May, when Democrats scored their own unexpected win in another New York special election. Then, Democrat Kathy Hochul won an upset victory in a heavily Republican district by stressing her commitment to protecting Medicare, the government health plan for seniors.

Weprin tried to adopt that strategy, warning that Turner would try to cut programs like Medicare and Social Security. But with unemployment still stubbornly high and voters upset with Washington over the debt ceiling negotiations, the pledge to protect entitlements was less resonant this time.

Democratic leaders trying to explain their bad night blamed it on the quirkiness of low-turnout special elections.

“The results in NY-09 are not reflective of what will happen in November 2012 when Democratic challengers run against Republican incumbents who voted to end Medicare and cut Social Security while protecting tax loopholes for big corporations and the ultra wealthy,” said Democratic Congressional Campaign Committee Chairman Steve Israel of New York.

House Democratic Whip Steny Hoyer echoed that feeling before the results of the two special elections came in. “I think every election reflects on the person in charge, but do I think it is an overall statement on the president alone? No,” said Hoyer. “Do I think it will be interpreted as being a statement on Obama? That’s probably correct.”

Some Democrats were still cynically repeating the old mantra. Rep. Henry Waxman said, “The Republicans want us to repeal the 20th century, the New Deal, the Fair Deal, to turn us back to the robber barons running the country, and to eviscerate the environmental and other regulations to protect public health and safety. And to cut spending in ways that would be very harmful to people who rely on government.”

Others, such as Rep. Eliot Engel, who represents Monsey, among other places, showed they don’t get it. He said the “feisty Barack Obama, the one that we knew and loved and voted for in 2008, reappeared last week.”

Tuesday, on his way to go try to help Weprin win, he said, “I think and I hope that that’s going to be the Obama were going to see from now to election time.”

Rep. Debbie Wasserman Schultz, chairman of the DNC, tried to explain away the loss to The New York Times, telling them, about the historically Democrat district, “In this district, there is a large number of people who went to the polls tonight who didn’t support the president to begin with and don’t support Democrats — and it’s nothing more than that.”

Republicans, for their part, seized on Turner’s win as reason to push back on Obama’s proposed $447 billion jobs program, which he has been promoting at stops across the country.

“Tonight New Yorkers have delivered a strong warning to the Democrats who control the levers of power in our federal government,” House Speaker John Boehner said in a statement. “It’s time to scrap the failed ’stimulus’ agenda.”

Republican National Committee Chairman Reince Priebus added: “Tonight’s election proves yet again that President Obama is failing our country. Not only are the President’s policies not working, but his non-stop campaigning is no longer winning over voters.”

Obama’s position on Israel became an effective wedge against Weprin. Former New York City Mayor Ed Koch, a Democrat, endorsed Turner and explained that a victory by the Republican would be the best way for Democrats to send a message to the President. It was Koch who determined that the race could be viewed as a referendum on President Obama. The 86-year old former mayor worked tirelessly on Turner’s behalf. Obama’s treatment of Israel and its prime minster angers Jews and fair-minded people, democrats and republicans.

On Monday, House Republican Leader Eric Cantor argued that a Turner victory would be an “unprecedented win” and the latest evidence of voter dissatisfaction with Obama.

“That district is not unlike the rest of the country. People are very unhappy with the economy tight now, and, frankly, I would say unhappy with the lack of leadership on the part of this White House,” Cantor, of Virginia, told reporters in the Capitol.

Back in the district that spans parts of Queens and Brooklyn, Turner campaigned with Rudy Giuliani, the popular former New York City Republican mayor.

Hoping to shift the momentum in the final days, the Democratic Congressional Campaign Committee invested more than $500,000 in ads in New York’s pricey television market. An independent Democratic group, the House Majority PAC ran ads, too. And Obama for America, part of the Democratic National Committee that support the president’s re-election, urged volunteers to rally behind Weprin. But the effort fell short, even as the party also enlisted two of its biggest guns, former President Bill Clinton and Gov. Andrew Cuomo, to record phone calls for Weprin. Democrats relied on organized labor and other affiliated groups to bring voters to the polls. The Republican Party did not see the victory coming, and until its final days, put in almost nothing into the race.

Weprin tried to cast Turner as hostile to popular entitlement programs like Social Security and Medicare. It’s a formula that worked for another Democrat, Kathy Hochul, who won a heavily Republican upstate New York district in a special election last May by vowing to protect those programs.

But Weprin, an Orthodox Jew, was put on the defensive on his views on marriage and Israel. He voted in favor of non-traditional marriage in the New York Assembly, to the chagrin of Jewish voters, even citing his religious faith as the reason for his vote. The frum residents of the district saw that as a chillul Hashem and sent a message to him and others like him who flaunt their Jewishness yet take positions on moral issues which are diametrically opposed to their religion and that of their constituents.

“Rightly or wrongly, it is (part of the race),” Turner said Tuesday. “This president has been less friendly than any other president in recent history, and I think today voters can hold him to account for it.”

The Washington Post and AP contributed to this report.