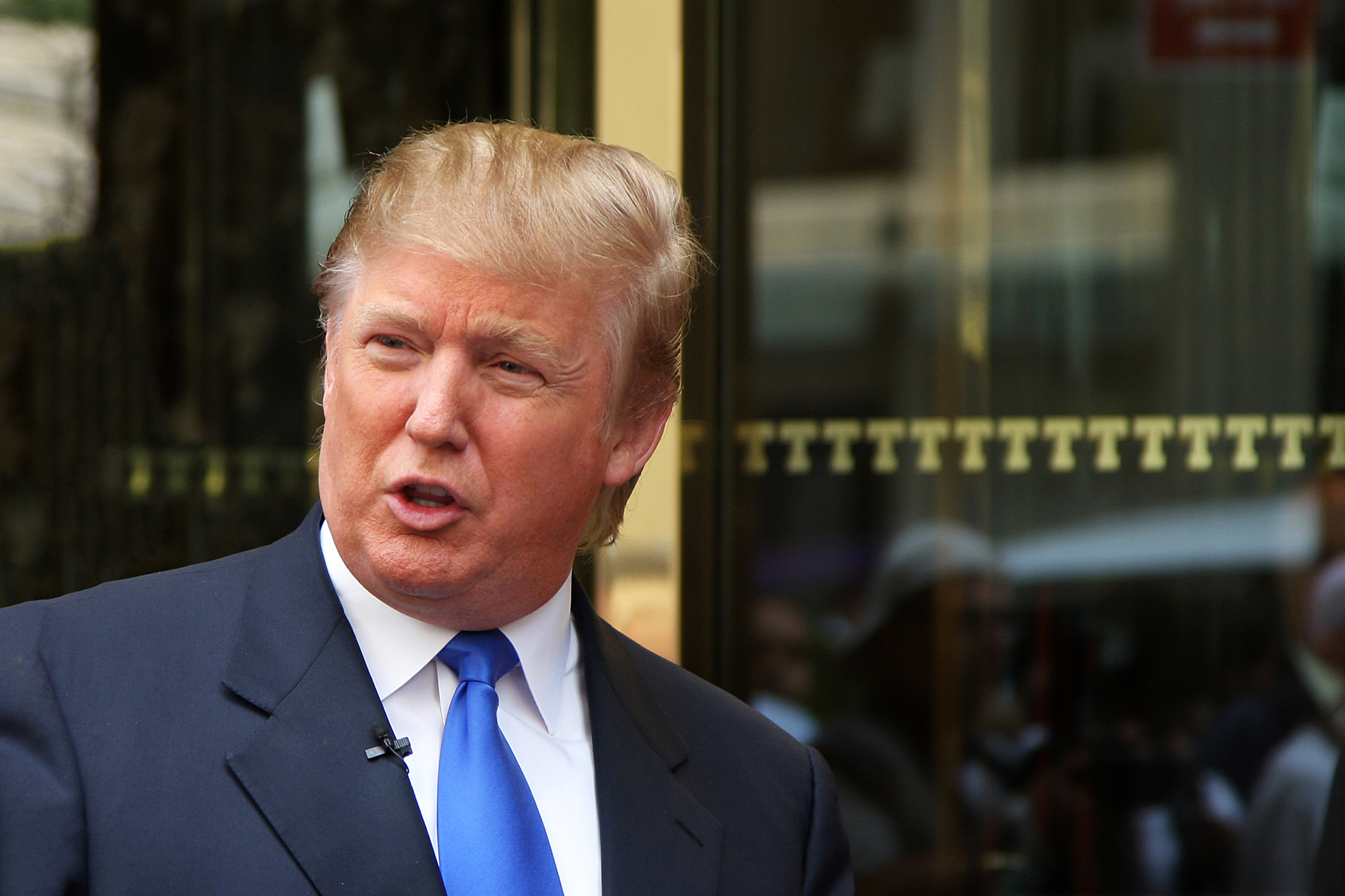 Someone was once giving one of my younger brothers a hard time about his older brother – that would be me. My brother replied, “Everyone can see what’s wrong with my brother. Why don’t you show what a big lamdan you are by figuring out what’s right?” I’d like to undertake such an exercise in lomdus with respect to President Trump.

Trump is often described as non-ideological. But I don’t think that is fully accurate. He has some clearly discernible ideas, or at least intuitions. And more often than not, those intuitions are sound and consistent.

If one had to point to a single organizing idea, it would be that nation-states, around which the international order has been organized since the Treaty of Westphalia in 1648, continue to be crucial. Insistence on American sovereignty is a key element of his more formal speeches and policy statements.

And one of the defining characteristics of a nation-state, in Trump’s view, is that the nation owes a duty to its citizens to place a higher value on their lives and well-being than it does on the lives and well-being of the citizens of other states, just as members of a family owe greater duties to their fellow family members than to non-members.

Thus, Trump has no interest in the debates about American exceptionalism that were prominent during the Obama years. His policy prescriptions derive not from the fact that America is the last greatest hope of mankind, but from the fact that it his country. He would expect every nation-state to show the same respect for its citizens.

The clash between European elites and the rising nationalist parties of the continent revolves precisely around this point: Does citizenship matter or not? That clash reached a head when German Chancellor Angela Merkel decided that it would be a good idea for the countries of the EU to admit more than a million unvetted refugees from Syria and other unhappy Moslem countries.

Had that proposition been put to a vote, it would not have carried in a single European country. And for good reason. The refugees as a group will constitute a huge drain on national welfare budgets. They are from groups that have historically proven least amenable to assimilation into European national cultures. (More Moslem citizens of one European country – I think Sweden, but am not sure – joined ISIS than have enlisted with the national military.) Primarily single young males, unsocialized in Western mores, the immigrants further constitute a major public safety threat, particularly to young women of native European stock. Finally, they will only exacerbate youth unemployment rates of around 25% in several European countries.

The response of the European elites to these reasons for curbing their humanitarian impulses has not been to address the facts, but rather to make it illegal – under the rubric of Islamophobia – to mention them in print or speech.

The rage expressed by so many Europeans against the transnational elites boils down to one question: What about us? Don’t we count? And it was similar anger that Trump tapped into so successfully.

Just as rapid large-scale immigration has roiled Europe, so was it Trump’s signature issue. And his attitude towards immigration reflects his citizens’ first perspective: The needs of those who are already citizens take precedence over humanitarian impulses to the rest of the world.

Now, it is impossible to fashion an immigration policy that serves the interests of all citizens equally, either in terms of the numbers of those admitted or their country of origin. But certain aspects of the current immigration system are antithetical to any rational policy based on national interests. What, for instance, is the point of a lottery, other than to treat the immigrants’ skill set, English knowledge, and likelihood of proving economically self-sustaining as irrelevant? Chain migration – take in one immigrant and you get the gantze mishpocha and the mishpocha’s mishpocha – similarly works against any ability to exercise any rational selection of immigrants. (A similar phenomenon in Israel in the 1990s resulted in close to a million non-Jews entering the country from the FSU.)

Trump rightly saw that those most ignored by policymakers – because they do not fall into any favored minority category – are working class whites. And he determined that insofar as any immigration policy will have to choose between competing claims of existing citizens – e.g., the preferences of big agriculture versus those of low skilled workers – his choice is for those who have been increasingly left behind by rapid change. Hence the effort to bring to a halt illegal immigration of unskilled laborers, who suppress the wages for such workers, and to limit the numbers of such newcomers arriving legally.

True, immigrants, including our parents, grandparents, and great-grandparents, have done much to build and improve America. It is not wrong to describe America as a nation of immigrants. Not common ancestry but a common American constitutional creed bound Americans together. But our education system no longer socializes newcomers in some common creed. Multiculturalism will not suffice in its place. And more recent immigrants come, at least in some cases, without any eagerness to become part of the American melting pot.

SOME OF PRESIDENT TRUMP’S policy prescriptions flow directly from his conception of the nation-state and the duties of that state towards its citizens. The clearest example would be his deep skepticism towards ceding or limiting American sovereignty in favor of international organizations, such as the UN. That skepticism is reinforced by the fact that only a minority of the member states can be called democracies.

That skepticism extends to international treaties like the Paris Accords, which to the extent that they are unenforceable remain mere virtue-signaling, and to the extent they are enforceable shackle the American economy in relation to less developed competitors, such as China and India.

Other presidential intuitions are related to but do not flow inexorably from his central idea. Defenders of national sovereignty are more likely to favor a strong military to secure that sovereignty. And the president has been consistent in that regard.

It is clear, moreover, that despite his shameful comments about Senator John McCain’s status as a war hero prior to the Iowa primary, he views military service and readiness to shed one’s blood for one’s country as one of the prime indicia of virtue. He has more former generals in his cabinet and senior positions than any recent president. And he speaks with the greatest personal emotion when honoring war heroes and fallen soldiers.

One need not believe that military service is either a necessary or sufficient condition for other forms of government service to think it is an important qualification. Trump has not proven the isolationist in foreign policy that many feared he would be. Yet, the statements that gave rise to those fears were based on a legitimate concern. Too many policymakers, both Republican and Democratic, whose own children are unlikely to see active duty, were not sufficiently attuned to the dearness of the lives of those whose blood was spilt in foreign wars.

I’m fairly confident that President Trump will pay no attention to the hysterical New York Times graphics showing that more Gazans than Israelis have been killed the next time Israel is forced to defend its civilians from rocket attacks, and for reasons flowing directly from his belief that a nation is duty-bound to put a higher value on the lives of its citizens.

Israel must not treat its citizens’ lives as hefker, and is obligated to do whatever is necessary to end life-threatening attacks on them. The only limiting principle is that it does no more than is necessary to end the threat and avoid civilian casualties not dictated by military necessity.

THEN THERE IS TRUMP THE CABDRIVER. I mean that as a compliment. I’m frequently struck by the comparative common-sense of the average Yerushalayim cabdriver compared to that of learned policy wonks.

Here are some things that the cabdrivers have noticed that the elites would prefer to ignore. Terrorist incidents around the world are overwhelmingly committed by adherents of a particular religion. Political Islam, Islamofascism, whatever you want to call it, is a threat. And it is never a good idea to hide one’s face from uncomfortable facts, such as identity of perpetrators – e.g., substituting “Minnesota men” for “Somali immigrants” in identifying a busted terrorist ring – or their motivations – e.g., classifying the Ft. Hood Massacre, whose perpetrator shouted “Alla-hu Akhbar,” as a case of workplace violence.

The 1979 Islamic Revolution in Iran was from the beginning international in its ambitions, as the name implies. Thus, the mullahs’ Iran can never be a status quo power and will forever be disruptive of the international order. And it will never be a friend of the United States, as the reigning theocrats are only too happy to point out at every turn.

The cabdrivers and President Trump have concluded, reasonably enough, that it is bad idea to provide an expansionist power with an unfettered path to nuclear weapons within little more than a decade, and allow it to develop its ballistic missile capacity in the meantime.

The cabdrivers ask why the Palestinians are treated differently than all other refugees from ethnic strife in the world since 1948, in that their refugee status never ends and they have a special UN organization, UNRWA, devoted exclusively to them.

And the cabdrivers wonder why the onus is always on Israel to be more forthcoming in negotiations with the Palestinians and why the blame is inevitably placed on Israel for the failure of those negotiations. The non-stop incitement and rabid anti-Semitism in the official Palestinian media and textbooks demonstrate that this generation of Palestinians is not ready for a state side-by-side with Israel and probably does not even want one.

Finally, Trump, who is at least an experienced negotiator, seems convinced that maintaining polite fictions is a hindrance to moving forward in negotiations. Thus, he acknowledges that Yerushalayim will always be Israel’s capital. And he will urge the Palestinians to recognize that Israel will never uproot hundreds of thousands of Jews from their homes in Yerushalayim and major settlement blocs.

Intuitions, even ones that are well-based, do not provide the answer to every challenge. Healthcare reform is one such arcane area where a great deal of technical knowledge is needed no matter what outcomes one seeks.

Nevertheless, President Trump’s intuitions down the line are far more reality-based than those of his analytical predecessor and his erstwhile opponent. And for that we can be grateful.

Last week, I went away with my wife for a few days. We were in an elevator in a hotel on the West Coast and

Comparisons between former president Donald Trump and ex-prime minister Binyomin Netanyahu are commonplace, especially by those with an animus towards both men. At one level,

Elul is Here Well, here we are. The weeks of the summer vacation have passed in the blink of an eye. It seems like just

It feels so good to get it absolutely right the first time. You know the feeling—or can at least imagine it. Hitting a home run