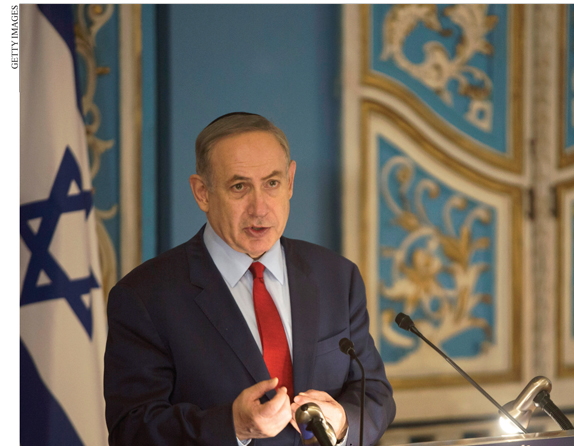 For months, Prime Minister Binyomin Netanyahu has been under siege by political enemies and the media establishment, trying to destroy him politically for more than 20 years. The attacks have now gotten quite serious and ominous. They involve two allegations of wrongdoing by the prime minister. There are also accusations of criminal wrongdoing by Netanyahu’s wife, Sara, for allegedly hiring cronies and padding the expenses of running the prime minister’s official residence.

A third scandal involves a lucrative bribery scheme on behalf of a large German military ship-builder. The bribes enabled ThyssenKrupp Marine Systems (TKMS) to win a $1.5 billion contract to build three additional submarines and four corvette-class surface ships for the Israeli Navy. While Netanyahu is not a target of that investigation, some of his closest associates are. And it is true that Netanyahu was unaware of his friends’ involvement in a bribery scandal involving large military purchases, as he claims, as prime minister it was his responsibility to learn about it and stop it.

The accusations have been labeled with catchy names to help the public keep the accusations separate and track the latest allegations of wrongdoing, as well as recurring rumors of imminent arrests and indictments. Prime Minister Netanyahu has become used to these allegations, which he calls “fake news,” and compares his current situation to that of President Donald Trump, whose enemies are determined to destroy him. Netanyahu has repeatedly assured his followers that they need not worry about his tenure in office, because all of the accusations of wrongdoing against him are false, while condemning his enemies for their lies and innuendos.

The corruption probe known as Case 1000 involves accusations that Netanyahu accepted very expensive gifts from rich supporters, including Arnon Milchan and Australian businessman James Packer. The gifts include cigars, champagne and jewelry, and are said to be worth tens of thousands of dollars. Netanyahu insists that there was no quid pro-quo and that did not do anything illegal for his benefactors in return for their generosity.

The corruption probe known as Case 2000 involves negotiations between Netanyahu and Arnon Mozes, the publisher of the major Israeli newspaper, Yediot Acharonot, in which Netanyahu promised Mozes help in competing with rival newspaper Yisroel Hayom, which is owned by Sheldon Adelson, a longtime Netanyahu supporter, in return for more favorable news coverage of Netanyahu in Yediot during the two most recent Israeli election campaigns. According to the accusation, the proposed arrangements between Netanyahu and Mozes during election season were a violation of Israel’s political campaign laws.

Case 3000 does not yet implicate Netanyahu directly, but it involves his close friend and personal lawyer, David Shimron, who was allegedly a middleman in a massive bribery scheme involving landing huge contracts for a German defense company to build several submarines and surface ships for the Israeli Navy. That case has resulted in arrests of prominent figures in Israel’s defense and political establishments, thanks to the testimony of the Israeli agent behind the bribes for the German company. He has become a witness for the prosecution.

Last week, the Israeli Supreme Court forced Netanyahu to publicize his phone logs, which document the number of calls he made to the owners and editors of the Israeli newspapers in question, and enable them to be correlated to their campaign coverage in the 2015 Knesset elections.

With regard to the accusations against Netanyahu’s wife, Sara, it was reported that she took and passed a lie detector test to aid in her defense against an expected indictment for improper behavior and misuse of state funds to the tune of $112,000.

At a Likud rally, Netanyahu said once again that he was a victim of “fake news.”

“The fake news industry is at its peak,” said Netanyahu. “Look, for example, how they cover with unlimited enthusiasm, every week, the left-wing demonstrations. The same demonstrations whose goal is to apply improper pressure on law enforcement authorities so that they will file an indictment [against me] at any price. Their theme is: ‘Netanyahu is guilty until he is proven innocent.’

“They are doing everything to hurt me and my wife because they think that if they bring me or her down, they will bring us in the Likud down,” he added.

Former Deputy National Security Adviser Atalia Rosenbaum and Minister Steinmetz were questioned by police last week, but officials said that Steinitz is not suspected of wrongdoing.

Judge Einat Ron of the Rishon Letzion Magistrate court said that the bribery case was still in its preliminary stages of investigation due to the vast extent of evidence involved.

The case also involves Netanyahu’s personal attorney and second cousin, David Shomron, who represents TKMS in Israel. The investigation began in earnest when a former IDF general was detained for questioning in mid-July along with several other suspects over allegations of bribery and money laundering.

The new wave of arrests was apparently the result of information supplied to police by Miki Ganor, the former representative of TKMS, who mysteriously arranged a deal for the company to build four ships at the cost of $511 million to guard Israel’s natural gas rigs without having to submit a competitive bid. Ganor became a state witness in July.

Former minister Zandberg is suspected of arranging bribes for Ganor in the submarine affair and of taking $28,000 for that service. He is also suspected of issuing fake business receipts, fraud and breach of trust. Tayeb is suspected of similar misdemeanors.

After the latest arrests in the Case 3000 scandal, Barak Ravid of Haaretz wrote that if Netanyahu knew of the officials’ corruption, he was guilty of violating ethical standards, and “if this whole affair took place behind Netanyahu’s back, then the prime minister doesn’t know what’s going on around him, and has surrounded himself unknowingly with a bunch of allegedly corrupt people, appointing them to the highest and most sensitive positions in government.”

Netanyahu was forced to release his phone logs due to a Supreme Court petition filed by Channel 10 reporter Raviv Drucker. They revealed the extents of Netanyahu’s conversations with Yisroel Hayom owner Sheldon Adelson and its editor-in-chief, Amos Regev. After correlating the calls with Yisroel Hayom headlines during that period, Raviv claims that Netanyahu spoke to Regev on fifteen of the nineteen days prior to the 2015 elections, often late at night when the newspaper was about to go to press. Regev also claims that the articles that appeared in the paper after Netanyahu had made those phone calls were consistently favorable to the prime minister or unfavorable to his political opponents.

Writing on Facebook, Netanyahu admitted that he spoke to Adelson and Regev an average of 0.75 and 1.5 times a week respectively between 2012 and 2015, but the prime minister insisted that this signified no wrongdoing. He wrote, “I will tell you something that everyone knows: All the politicians in Israel speak to publishers, editors-in-chief and journalists. Between politicians and the media, there is a constant and ongoing dialogue — this is what is accepted in democracies.”

Israeli news reports indicated that the indictment of Sara Netanyahu by state prosecutors for improper behavior and misuse of $112,000 in state funds is expected to happen very soon.

Specific allegations against her include the hiring of electrician Avi Fachima, a member of the Central Committee of the prime minister’s Likud party; using state funds to purchase private meals; and using government funds to buy furniture that was intended for use in the prime minister’s official Yerushalayim residence but was instead sent to the Netanyahu private home in Caesarea.

Sara Netanyahu took a private polygraph test conducted by the Tal Polygraph center at the suggestion of Yoav Yitzchak of News 1 to verify her story. The test found her to be telling the truth regarding “her version of the events” in regard to the alleged misuse of public funds for private meals. The polygraph test indicated that she answered truthfully when she said that she never inflated the number of guests at the official residence, never asked workers to report private affairs as state events, and was never aware of rules being broken regarding the ordering of supplies for the prime minister’s residence.

She accuses former chief caretaker Menny Naftali of creating the excess expenses through over-ordering. However, a senior police official has refuted that claim, saying that the high expenses at the prime minister’s residence “began before Naftali came to work at the residence and continued after he was fired.”

Binyomin Netanyahu continues to deny any prior knowledge of the wrongdoing in Case 3000 and claims innocence in the two other corruption probes against him.

In early August, Netanyahu’s former chief of staff, Ari Harow, signed a deal to become a state witness in the investigations, which increased media speculation that the indictment of the prime minister on corruption charges might come sooner than expected. One senior police official said it was more likely that police recommendations regarding the two cases would not be submitted until December.

But the noose does appear to be tightening.

(Material from JNS.org was included in this report.)