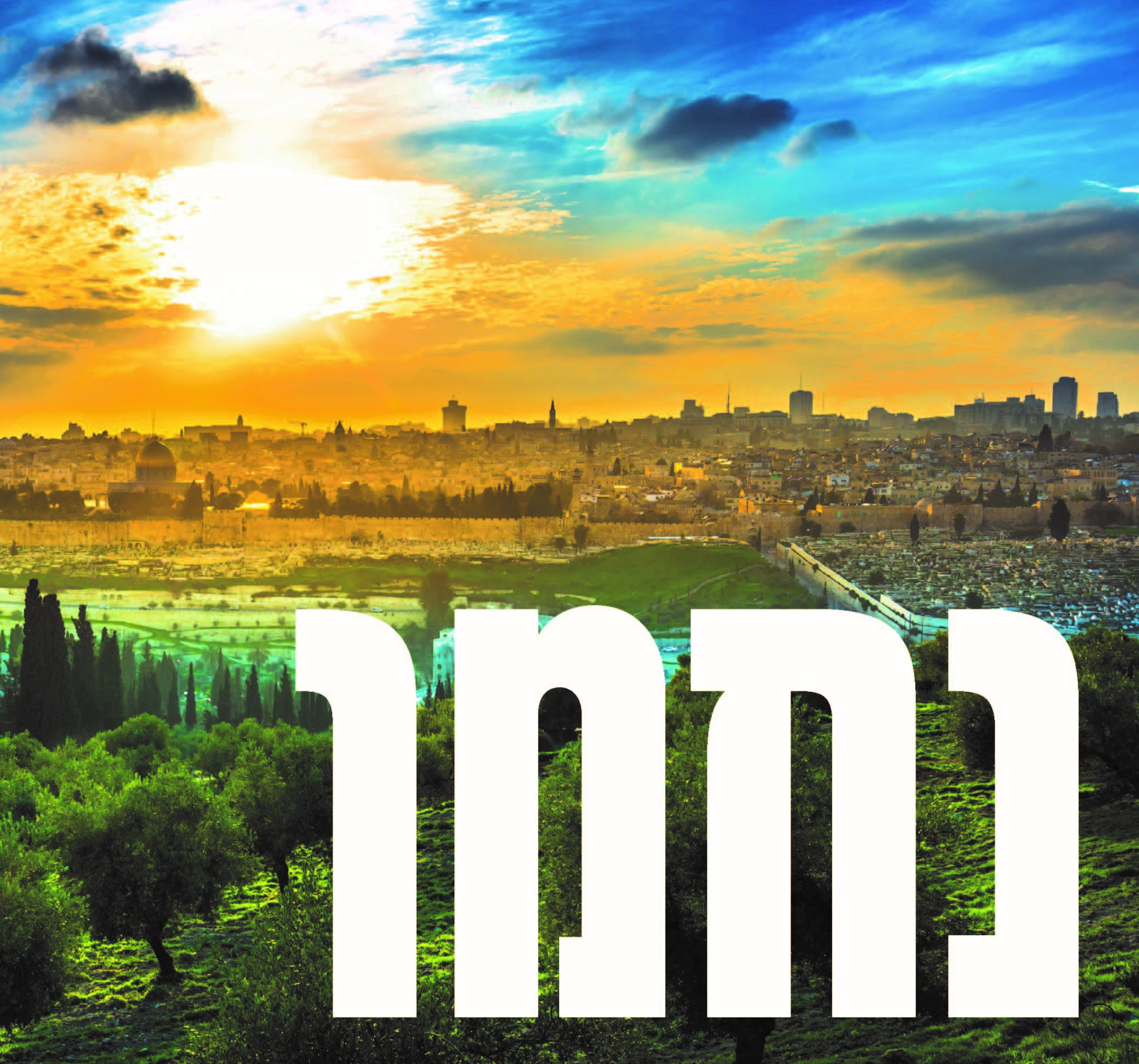 Here we are, after three weeks of sadness, of mourning, of refraining from haircuts and music and weddings. There was no shopping, no shaving, no big trips, and for nine days there was no swimming, no clean clothes or wine and meat. We let go of earthly comforts to remind us of something that happened two thousand years ago.

We like to think that we have progressed. We are living in the most advanced era known to man. We have left the past in the past and are moving ahead rapidly. We are making and spending more money than ever before, living on a much higher standard than any of our predecessors.

Everyone has at least one car, and a nice, comfortable place to live with air conditioning. Some even have two places, a home in town and one in the country. We have more food than we need and clothing galore.

And then, we have the Three Weeks and the Nine Days to remind us of years gone by and to let us know that as much as we have, we have nothing. We are lacking. Empty. We are exiled far from home. In a strange land. And we look around – and in the mirror – and wonder: What are we lacking? What are we missing? Why are you telling me that my life is lacking?

But, paradoxically, the further we stray, the closer the geulah is. We can only sink so low. We can only stray so far. For Klal Yisroel, there is never a point of no return. We begin to rise when we hit bottom.

That is why after chatzos on Tisha B’Av, we begin relaxing some of the strictures of the day. Because it was at chatzos that the destruction of the Bais Hamikdosh was completed and the building was set on fire.

The Vilna Gaon taught that at the point that the building was totally razed and the prophecy of the posuk (Amos 5:2) which states, “Noflah lo sosif kum,” was realized, the foundations were being laid for the realization of the prophecy of the novi Zechariah (8:4-5), “Od yeishvu zekeinim uzekeinos b’rechovos Yerushalayim – Old men and women will yet sit on the streets of Yerushalayim…and the streets of the city will be filled, young boys and girls will be playing in her streets.”

Rav Dovid Cohen, in the recently published third volume of his sefer Mizmor L’Dovid, writes that this is the explanation of the oft-repeated Chazal that recounts of the time that Rabi Akiva and his colleagues were at the site upon which the Bais Hamikdosh had stood and saw a fox emerging from where the kodesh hakodoshim had stood.

“Why are you laughing?” they asked.

“Why are you weeping?” he responded.

They told Rabi Akiva that they were crying because they saw the depraved situation of the holiest place on earth.

He responded, “That is why I am laughing. I see the realization of the nevuah of Uriah Hakohen that ‘Zion shall be plowed as a field,’ and just as that prophecy came to pass, so will the nevuah of the novi Zechariah, foretelling of the rejuvenation of Yerushalayim.”

Rav Cohen explains that Rabi Akiva was consoling them that since they had seen that the Bais Hamikdosh had been totally destroyed, they could understand that from there they could not sink to a lower level and from there the geulah would begin to sprout. The very reason they were crying was the reason he was happy.

So too, in our situation, every year of golus brings us closer to geulah. There is a limit to how much we can take. Each year that we are kept away from the Bais Hamikdosh forces us to slide further away from our core of kedusha. We have lost so many of our people to the throes of tumah and taavah which threaten to engulf us. The longer we are in golus, the more pervasive and difficult to overcome the challenges become.

Hakadosh Boruch Hu didn’t send us into golus to be totally destroyed, but rather as a means for us to improve ourselves and the world. When we have endured as much as our nation has suffered over the past century and recently, the rays of Moshiach begin shining and the golus has to end.

The novi speaks to us and says, “Nachamu, the sadness will soon end. Nachamu, the golus is almost over. Nachamu, accept consolation over the past. Nachamu, a bright new day is dawning.”

As we sat on the floor saying the Kinnos, we mourned the churban of the Botei Mikdosh, as well as the calamities that befell the Jewish communities of Europe one thousand years later during the First Crusade. We remembered the Jews who were ripped apart during the Inquisition, the gezeiros of Tach V’Tat, and the expulsion from Spain in 1492. We were reminded of the seforim that were burnt in Paris in 1242. As we said the Kinnos, we gained a new perspective of Jewish life and suffering. Kinah after Kinah filled us with so much sadness, it seems surreal that one people can bear so much.

We mourned the millions who were killed and maimed physically and mentally during the harrowing century that just ended.

And then we finished the Kinnos, chanted Eli Tziyon, raised ourselves from the floor, straightened out the chairs, and returned to our homes.

Last week was Shabbos Chazon and this week is Shabbos Nachamu. That’s the recurring cycle of our existence. We never sink into yi’ush, despair. We never give up hope. One day we can be deep down in the dumps and the next day we can be sitting on top of the world. History has shown that pain and tragedy give birth to nechamos.

Perhaps the minhag to say Kiddush Levanah for Chodesh Av on Motzoei Tisha B’Av codified by the Rama (Orach Chaim 551:8) can be seen as a message from which we can take consolation. Tisha B’Av commemorates all the tribulations that befell our people through the centuries. Recounting all the misery we have suffered can bring a Jew to melancholy and despair. To counteract that response, as soon as the fast is over, we venture outside and remind ourselves that Am Yisroel is compared to the levanah. Just as the moon shrinks and disappears from view only to regain its full size and completeness, so too Am Yisroel. Although its suffering causes it to diminish and wither, it revives and waxes strong and whole once again.

The same applies to life, personal and communal. There are ups and downs, times of great joy and also periods of intense sadness and grief.

This can also be the understanding of the posuk in this week’s parsha (4:30), which speaks of our time when it states, “Batzar lecha umetzaucha kol hadevorim ha’eileh b’achris hayomim, when you will experience many tzaros… in the period of the end of days, then you shall return to Hashem and follow his commandments…”

The Chofetz Chaim explained this posuk by referencing to the gemara (Sanhedrin 98a) which states that if you are in a generation in which there are many tzaros, that is an auspicious time for Moshiach to arrive.

Nachamu, look forward. Just over the horizon, a bright future awaits us. The Jews who have suffered throughout the ages for being Jewish, those who were burned at the stake, whose blood flowed at Beitar, and who were sent into exile by the Romans, the English, the French, and the Spanish will be returned to us.

All those who were tortured and killed, who were physically and mentally battered by the Germans, who were murdered in their prime, or who died as elderly, good, ehrliche Jews, all of them will gather together in Yerushalayim.

Shabbos Nachamu proclaims that the day Zechariah spoke about is not far off.

Nachamu, be consoled, for from sadness comes joy, from aveilus comes simcha, and from churban and golus come geulah.

May it happen speedily in our day.