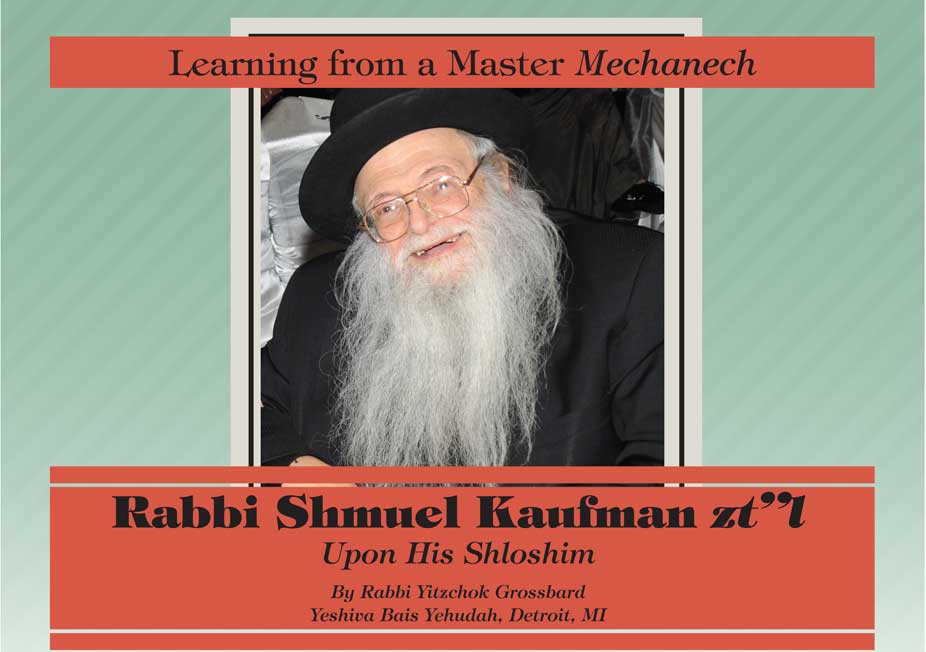 Rabbi Shmuel Kaufman zt”l, who was niftar on the 15th of Tammuz, was a legendary mechanech and mashpia at Yeshiva Bais Yehudah and in the Detroit community for close to sixty years. His incredible life of teaching, influencing, impacting and transforming hundreds of talmidim spanned three generations and over five decades, continuing until just a few months before his petirah at age 82. There will, no doubt, be much spoken and written about this unique individual. This tribute attempts to focus on a few of the lessons we, his talmidim and mushpa’im, can try to learn from him.

The Chazon Ish zt”l compares the chinuch process to filling a container with liquid. As the container fills and spills over, the area surrounding the container receives the liquid. The goal of a mechanech is to “fill himself” with Torah, yiras Shomayim and middos tovos, for this is the most profound and effective chinuch – when the rebbi’s essence overflows and fills his talmidim.

Rabbi Kaufman was a living example of this concept. So many of his talmidim developed a geshmak and love for Torah while in his class, because Rabbi Kaufman’s ahavas Torah and extraordinary geshmak for learning overflowed onto them. We learned what pure and sincere tefillah is by listening to Rabbi Kaufman say a brachah b’kol, answer amein b’kol, and proclaim “Amen Yehei Shmei Rabboh” like a true soldier declaring allegiance to a higher authority. Similarly, he taught us the fundamentals of emunah, bitachon, emunas chachomim, and Hashgachah Protis through his stories, his “maasehs.” When Rabbi Kaufman told a story, every detail came alive to his listeners, not only because he was a master storyteller, but also because he was living the maaseh himself while he told it. And he truly believed in the message of the “maaseh.” If the story was about a gadol, we could feel the gadol’s presence in the room and experience the eimah and kavod he had for that gadol, thereby strengthening our own kavod haTorah and emunas chachomim. If the story was about Hashgachas Hashem, we could feel his clarity and his complete emunah, and we could not help feeling the same.

A member of our yeshiva’s hanhala visited Rabbi Kaufman in the hospital five weeks before his petirah. Rabbi Kaufman asked his visitor what he was planning on saying at the upcoming graduation. “What should I say?” the visitor asked him. After some thought, Rabbi Kaufman said, “Tell the boys to try to appreciate all the good they have, and to focus on the positive.”

Rabbi Kaufman had the ultimate “ayin tovah,” positive outlook. He saw the positive in each talmid, in each person, and the positive in his own life. He would often say to his fellow rabbeim, “These kids are such good kids!” This was another crucial component of his success as a mechanech and a mashpia.

Equally powerful was the impression he made on his talmidim with his amazing simchas hachaim. Rabbi Kaufman was orphaned of his mother at a very young age; he suffered from significant physical pain all his life; for the last 25 years he walked with canes and then was confined to a wheelchair, needing assistance with many of the basic functions one often takes for granted; and he endured many other nisyonos. But he was b’simcha. His smile and “good morning” were encouraging and uplifting. His simcha for Torah, davening, chesed, mitzvos, and life itself spilled over in a significant and profound way. His brother, Rav Yosef, commented that the secret to Rabbi Kaufman’s success in chinuch was a comment on a very well-known statement of Rashi by Rabbi Kaufman’s uncle, Rav Chaim Pinchos Scheinberg zt”l.
Rashi writes on the posuk of veshinantom levonecha – and you should teach your children, “eilu hatalmidim – these are the students.” “If someone views his talmidim as his own children,” said Rav Scheinberg, “he will have htazlachah with them.” Rabbi Kaufman loved his talmidim dearly, viewing them as his own children.

Even when Rabbi Kaufman was no longer teaching full time in the classroom, he was present in the yeshiva and had an amazing ability to connect with talmidim of all ages. How did his talmidim know he loved them? They just knew it. True ahavah does not require direct communication or clarification. It is real and one knows it. Rabbi Kaufman’s talmidim knew that he loved them like his own children, and they loved him very much back.

Rabbi Shimshon Jonas, Rabbi Kaufman’s son-in-law, who cared for his shver with extraordinary devotion and love during the last several years of his life, related that Rabbi Kaufman once told him that he didn’t recall ever sitting down to learn only with one of his own children. Rather, another child from the community always joined them. Why? Because all his talmidim were his “bonim,” his children.

The Gemara in Maseches Chagigah tells us that if a teacher is viewed as a “malach Elokim,” an angel of Hashem, then one should desire to learn Torah from him. Rav Shraga Feivel Mendlowitz zt”l explained that a malach, by definition, does not have any self-interest. By its very nature, a malach is a being completely devoted to its mission. This, said Rav Shraga Feivel, is what the Gemara is referring to. A mechanech must be completely focused on the child he is teaching. What is best for the child is not only the most important thing, but it must also be the only thing.
Rav Meir Simcha Bakst said in his hesped, “Rabbi Kaufman did not have any ‘zich.’” He was a man focused on his talmidim and on his avodah. His focus was on the talmid, understanding the talmid and caring about the talmid. In that sense, he was indeed a rav hadomeh l’malach Elokim.

In the brachah of “Al Hatzaddikim” in Shemoneh Esrei, we daven for the “plaitas sofreihem.” Many meforshim explain that this refers to the teachers of Torah. Rav Shimon Schwab zt”l explains that our melamdim are referred to as “plaitah,” the remaining ones, because most people choose not to become Torah teachers, as this job is often underappreciated and poorly compensated.

There has been much talk recently of the insufficient recognition and appreciation of our melamdim. Equally as important as the community recognizing a melamed’s value is a melamed himself recognizing his own value. As Rav Schwab writes in his sefer on tefillah, “Without our melamdim teaching Torah to our children, we would cease to exist as an Am Yisroel.”

Rabbi Kaufman understood this very well. He conducted himself with true pride and a real sense of achrayus for his role as a melamed Torah. He did not need other people’s recognition or approval, because he understood, with complete clarity, his purpose and his avodas hakodesh. It is undoubtedly because of this that all of Rabbi Kaufman’s children today are mechanchim or mechanchos, a fact that made him very proud.

Rabbi Menachem Zeesha Greenfield commented, “There will never be another Rabbi Kaufman, and right now it’s almost impossible to picture Yeshiva Bais Yehudah without him.” Very true. However, we, the mechanchim and mashpi’im of this generation, can learn many lessons from this master mechanech and, be’ezras Hashem, continue our own avodas hakodesh.Yehi zichro boruch.