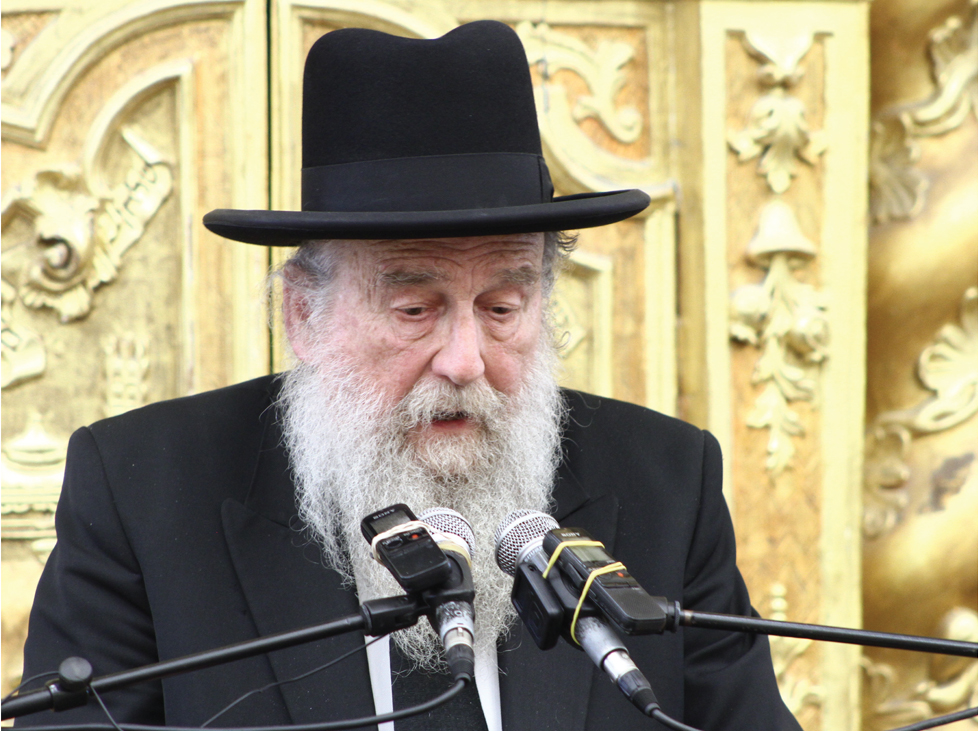 Upon hearing the news of Rav Moshe Shapiro’s petirah, I felt completely numb. I was not even his talmid; I would never dare make such a claim. But I gleaned much from his Torah. As such, I was overcome by a tremendous feeling of loss.

I can vividly recall the first time I attended one of Rav Moshe’s shiurim at Ohr Somayach. I had never experienced anything quite like it before. This despite the fact that I did not understand much of what was being said; Rav Moshe delivered this shiur in a sophisticated Ivrit.

Just as everything Rav Moshe said or did was laced with sophistication.

Yet, the shiur spoke to me in a manner and a language I had never before encountered. Before this instance, I had little exposure to the world of the Maharal, Ramchal, and Rav Tzadok. Suddenly, though, the pieces of the puzzle seemed to fit just right; everything made perfect sense. His chituch hadibbur and sense of precision brought to the fore the magnificence of these esoteric thoughts. His ability to articulate the deepest mysteries with alarming and razor-sharp clarity placed him in the same company as the brightest and most talented baalei hasborah and masters of logic.

So no, I won’t dare compose a hesped. It would do Rav Moshe a disservice; he was quite careful about every word that emanated from his mouth and his pen. But there still is much to say.

Quite fittingly, Rav Moshe was taken from us on the tenth day of Teves. In the month of Teves, we commemorate tragedies on the eighth, ninth, and tenth days of the month. On the eighth, Talmai Hamelech had the Torah translated into Greek. On the ninth, Ezra Hasofer was taken from us. And Nevuchadnetzar laid siege to Yerushalayim on the tenth. Chazal tell us that during these three days of Teves, darkness spread over the world.

As Rav Moshe would say in his inimitable fashion, “Nenaseh lehovin — Let us try to understand.” And so we shall:

Translating the Torah took away from its depth, making it somehow shallower. In Lashon Hakodesh, every letter contains an infinite number of explanations, and so layers and layers were lost in the translation, thus diminishing the exclusivity of Torah. The infinite was now relegated to the finite. This was the first tragedy.

The Gemara (Sanhedrin 21b) reveals that Ezra Hasofer was worthy of having the Torah given through him, but Moshe Rabbeinu preceded him. Throughout his life, Ezra worked tirelessly to strengthen the learning of, commitment to, and dissemination of Torah.

The Chasam Sofer (Chodesh Teves p. 204) writes that the Sifrei Torah used to be written in a different writing than the one we have today. The holy k’sav that we use today was hidden in the Sefer Torah in the Aron, and all the secrets contained in the tagin and crowns of the letters were passed down orally from one generation to the next. There was never a need to look inside the Torah. The nevi’im and chachomim checked the Torah only when needed. But when shikchah became more prevalent, Ezra determined that there was once more a need to transmit the Torah in k’sav Ashuris (the letters we use today), along with all the hints and signs. Thus, the Torah was given through Ezra after all. With his passing, the world turned dark, for on the ninth day of Teves, the one who brought that light was taken from us.

With Rav Moshe’s petirah, the world of machshovah is once more cloudy and blurred, the Torah world utterly bereft. In many ways, the infinite has once more become finite. The one who brought us light is no longer among us.

Rav Moshe’s breadth of knowledge was immense, too awesome to fathom. He knew, quite literally, everything — kol haTorah kulah — and quoted verbatim from the most obscure, esoteric sources. He mastered Nach at a young age, and its sacred words became his sha’ashuai, playthings. He noticed similarities in the Torah’s words and expressions and connected those concepts to each other, weaving an astounding tapestry of Torah, revealing parpera’os of chochmah, uncovering layers of truth concealed in the osios haTorah, his “Baal Haturim-esque” style unparalleled. How the letters of the Alef-Bais must be dancing to greet his exalted neshomah!

When one comes across a stunningly brilliant notion from the Megaleh Amukos or Rav Shimshon Mei’Ostropolia, staples of Rav Moshe’s vernacular, we rationalize that these Kabbalists lived hundreds of years ago, their genius seeming to border on ruach hakodesh. But Rav Moshe lived in this dor, among the rest of us. And yet, he was meyuchod, unique, untouchable.

On one occasion, Rav Moshe stayed in our neighborhood and a close friend was privileged to host him. He shared with me that Rav Moshe never used his bed; he learned the entire night. How humbling to contemplate photographic brilliance combined with such hasmodah.

But there was a different side to Rav Moshe. It seemed to be in stark contrast to the unapologetic glances one received when interrupting his shiur and asking shelo k’inyon. Rav Moshe’s enormous heart transformed the lives of many. His royal stature, the manner in which he stroked his beard and carried himself, gave way to a drastically different picture. Yes, his heart was as big as his mind.

One fellow, who was going through a hard time, later confided that while undergoing his challenges, he turned to Rav Moshe for guidance, love, and support. He told me that it was not unusual for Rav Moshe to come into his home, enter the kitchen, remove his kapote, and pull out a frying pan to prepare eggs for his broken talmid. He connected deeply and gave him the warmth and love he needed to persevere and carry on.

This falls in line with the Rav Moshe who was emotionally incapable of stepping off the bus when he arrived in Auschwitz a few years ago. For over half an hour, he stood on the bottom step trembling, unable to tread on the blood-soaked ground of purgatory on earth. His pure heart simply could not tolerate the evil. And Rabbi Aubrey Hersh, the brilliant historian and tour guide, who travelled extensively with Rav Moshe, shared that when Rav Moshe finally stood at the sites of the destruction of European Jewry, the tragic prophecies from Yeshayahu flowed from his lips.

Rav Moshe’s daughter Shulamis passed away after a prolonged illness. One talmid recalls how Rav Moshe was maspid her in a way only he could. He quoted the Gemara that states that if two people are in a partnership and one wants to pull out, he may do so only with permission from the other partner, the other shutaf. Rav Moshe looked up to Shomayim and with great emotion cried out, “Mi natan lecha reshut?” He was indicating that the Al-mighty, a Partner in his daughter’s life, had now pulled out of the deal, and who had given Him permission?

But then Rav Moshe composed himself and cited a Rashba, which states that if the separation of the partners will be beneficial for one of the parties, then that party may dissolve the partnership. With great resignation, Rav Moshe publicly gave permission to the Shutaf to do as He pleased. However, only on condition that his daughter’s petirah would serve as a zechus for the rest of the shutfim.

Echoing that powerful sentiment, we cry out: “Ribbono Shel Olam, how can You take Rav Moshe away from Klal Yisroel? Who will crystallize Your Torah? Who will make those letters shine and glow?”

Sadly, we have no answers, and now the rest of the shutfim are broken beyond measure.