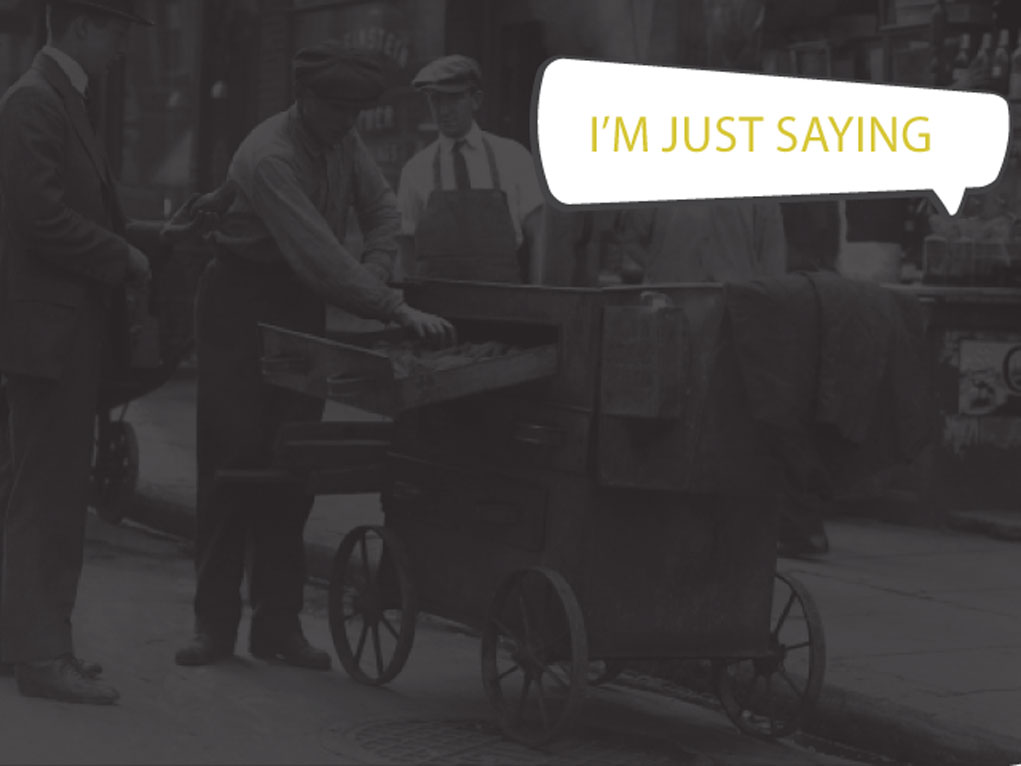 I recently received an article about a museum exhibit that will be housed in one of California’s prominent museums and will travel across the USA. It will portray the good old American kosher (or Jewish but not too kosher, if such a synthesis is technically possible) delicatessens.

The impetus for the exhibit, like many other institutions now relegated to museum status, is that  a few Jews (who seem to have no better way to spend their money) decided to create a museum exhibit to what they believe is a fading institution across the American-Jewish experience – the Jewish or kosher-style deli. The next generation, nebach, will never know the glory days of the hot pastrami sandwich on rye.

In an article, the New York Times, a self-appointed arbiter of Jewish values on every occasion from pickles to Middle East conflicts and the right of the State of Israel to exist, portrayed this exhibit with more reverence than it affords the holiest sites in Jewish history.

In great detail and veneration, the Times describes the exhibit, which is based a few thousand miles from the probable birthplace of the kosher deli, in a prestigious museum in California and will travel across the country so that America and its Jewish population will understand what it has lost with the Churban Delicatessen.

The exhibit has all types of Jewish memorabilia, including pictures of the old delis that dotted the country in places where Jews lived, kosher knives, pushcarts, and pickle barrels. There are pictures of ads for Vilna sausages, and authentic battered traveling valises used by immigrants from Lithuania are lined up against a wall. According to the Times, “They conjure the Lower East Side of a century ago, bustling with Jewish immigrants from Eastern Europe, in the midst of creating a cuisine and a new kind of restaurant.” Of course, the exhibit displays the Jewish politicians who stopped at those Jewish delis to affirm their Jewishness by eating a pastrami sandwich and a knish.

I was pleased to read that the curators went into a panic when someone trying to recreate actual foods from non-perishable items for the exhibit made a huge mistake. They created a large plastic replica of a pastrami sandwich with a visual condiment that sent the curators into a frenzy. The replica of the thick, yellow mustard that was plastered on top of the faux fleish took on the appearance of American cheese. “Gevalt!” cried the curators. “We can’t have that! It’s treyf!” Sadly, I doubt too many people will even understand that attempt at sarcasm.

I guess that is some consolation to those who may actually go to the exhibit that will travel across the country, and, yes, it will be presented at the museum of the New York Historical Society.

I most certainly don’t understand the entire relevance of the exhibit. A hot pastrami sandwich and a pickle is something that anyone can still easily get at the local “Traditions” restaurant here in the Five Towns, or at the iconic Gottlieb’s in Williamsburg, or at dozens upon dozens of other truly kosher eateries across the area. I guess that their existence is disavowed because they are situated in “frum areas” and not on Park Avenue or in Scarsdale or Beverly Hills.

I guess I have to empathize with my irreligious coreligionists whose only association with their Yiddishkeit came from the now defunct “kosher” delis into which I would never step foot. I guess that they went the way of Shmulka Bernsteins and other institutions that had lost their clientele to the sad fate of theological and thus gastronomical assimilation.

But something struck me about the somber tone of a portion of the article. The article states: “But there is also something elegiac about the exhibit, a reminder that delis and the food they served are no longer as prevalent as they were 50 years ago, even in Jewish life. The show is an exercise not only in history, but in nostalgia. There were an estimated 3,000 Jewish delis in New York City in the 1930s; now there are just a few dozen, according to the New-York Historical Society.”

The word elegiac according to the dictionary means “of, relating to, or involving elegy or mourning or expressing sorrow for that which is irrecoverably past.” It hit me as we are in the elegiacal days of mourning for much more than a good pastrami sandwich.

Liberal American Jewry has lost everything. The last thing left to mourn is their “kosher deli.” And while the museum-goers in California are mourning their lost deli sandwiches, their cole slaw, pickles and knishes, we are mourning our eternity.

We have no museums or travelling exhibits to ooh and aah the younger generation of a world that was lost. What we do is work as hard as we can to recreate it. The proliferation of yeshivos and Torah study does not suffice us. The myriad shuls that spring up in every locale in which Yidden are situated do not console us. We still mourn for the eternity of the spiritual centerpiece of Yiddishkeit – the Bais Hamikdosh.

The Jew who identifies himself with the kosher pickle can add much more to his museum. They can mourn their Yiddish theatre and the literature of Sholom Aleichem and his whole crew. They can mourn the hundreds of Conservative synagogues that laughed in the faces of the struggling Orthodox shuls, whose rabbis had to fight their boards to keep a kosher mechitzah. They can add the Talmud Torah Hebrew school, which once had hundreds of students who would have to attend in order to be officially “bar mitzvahd” with the thin silk shawl draped on their shoulders.

Those iconic symbols of the demise of Judaism and the assimilation to American culture seem to be fading. We all mourn the thousands upon thousands of Jews who, like those temples and Talmud Torahs (and “kosher delis”), were lost to the winds of assimilation, but we certainly can celebrate the growth of Torah while we mourn for the source of all of our spirituality.

It is sad that all that is left in the nostalgic offerings to the Jewish American public is the portrayal of the Jewish deli. Sadly, it may be the last iconic symbol of Judaism for so many who already have had everything else ripped out from them.

Certainly, if American Jewry thinks that the loss of kosher-style delis marks a significant deficiency towards their Jewishness, then I am afraid that we are all in a pickle.