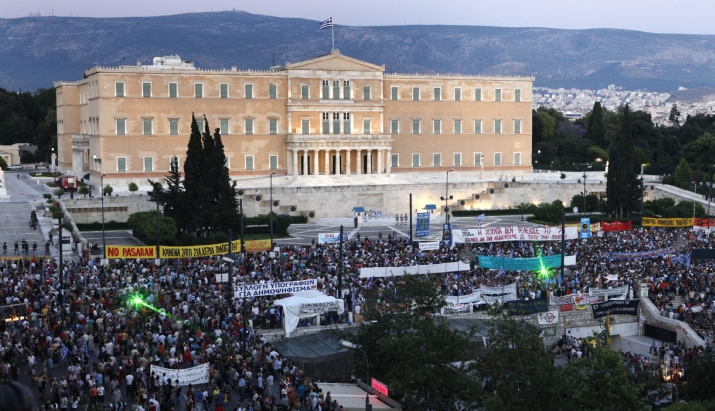 Once upon a time there was a small southern European country which had a very high standard of living, and enjoyed the prosperity of its larger and economically stronger neighbors, by sharing the common euro currency, and free trade. The country had a very inefficient bureaucracy, and suffered from high levels of tax evasion and corruption, but as long as prosperity reined in the rest of Europe, the resulting economic problems could be easily ignored by borrowing money. Then, the 2008 world economic crisis hit. As the country's tourist-based economy collapsed due to a lack of visitors, it did what it always had done before, turning to its lenders to borrow more money. However, something had changed. In 2009, after 15 consecutive years of economic growth, the little country suffered a recession. Suddenly, the little country had the biggest budget deficit in Europe. Those European banks, which used to be happy to buy as many of the country's bonds as it was willing to sell, were now asking for much more interest in return. They were also demanding to know when the little country would stop running up budget deficits and get its debt under control. Because of the financial crisis, the banks now had to worry about when and how its loans would be repaid, and whether the little country's bonds which they had bought, and were holding on their books as assets, would continue to pay their scheduled dividends.

The truth was that everybody knew that the little country could not balance its budget without raising its taxes so much that it would throw its economy into recession. Since the country was a democracy, whose citizens would naturally protest against higher taxes, cuts in welfare spending, and the other measures needed to balance the budget, it was clear that it would never be able to repay all the money it was now borrowing, or even the money that it had borrowed years earlier.

The problem now was that the government of the little country was rapidly running out of money, not only to pay for its inefficient bureaucracy and generous welfare program, but also the dividends that were due on the bonds which it had sold to European banks in recent years.

The calculation was simple. If the little country stopped paying the dividends on its bonds, the rules of finance would judge the country to be in default, making its bonds effectively worthless. Then the European banks would have to deduct the face value of all the bonds they were holding from their assets, which would put some of them in violation of requirements to hold a minimum amount of assets to cover their other financial obligations.

Falling below those minimums would also be considered a financial “event.” It would put those European banks in non-compliance with agreements governing their transactions with other financial institutions around the world.

It would also create a domino effect. The failure of the little country to pay its bond dividends would impact the European banks holding those bonds. Then the financial failure of those banks would affect other financial institutions and investors around the world. We saw an example of the potential dangers of this “domino effect” after the failure of Lehman Brothers in September, 2008.

So many other banks and investors doing business with Lehman were affected that a general fear gripped the financial markets over what became known as counter-party risk. That meant that if the ostensibly solvent bank or investor that you were doing business with had a financial exposure to Lehman’s bankruptcy, you were suddenly at risk, too. Overnight, lenders afraid of hidden counter-party risk stopped lending money, even to nominally creditworthy borrowers. Markets collapsed and as credit lines were frozen, economic activity ground to a halt. The world economic system was on the brink of a calamity, and only heroic efforts by the Federal Reserve and US Treasury prevented a worldwide economic meltdown.

This “near death” financial experience, at the turning point of the crisis, taught the world’s financial market regulators a lesson: sometimes bailouts, as unpalatable as they may be, for numerous reasons, are still better than the chaos which is likely to result from the failure of a major international financial institution.

LEARNING THE LESSONS OF LEHMAN

What is the lesson as it applies to this small European country? On one level, it is that the other European countries have no choice but to prop up the value of its bonds, no matter how badly the country’s economy has been mismanaged, because the impact of a bond default on Europe’s largest banks would be too severe, and possibly catastrophic.

Naturally, it would be too embarrassing for the leaders of Europe’s largest countries to admit that they cannot risk allowing one of their smallest neighbors to go bankrupt. But that is the reality.

For the sake of appearances, the little country will be forced to jump through various economic hoops, including austerity programs, debt reduction initiatives, and welfare benefit reductions. But in the end, the larger countries will agree to cover its debts, make up its income shortfalls, as many times as it takes, in order to avoid the dangerous uncertainties that would result if the country were to default on the bonds which are so widely held by other financial institutions.

The little European country we are talking about, of course, is Greece. The basic facts of the Greek economy are bleak, but Greece’s European trading partners cannot escape their responsibility to bail it out, both because they are already holding too much of Greece’s debt to allow that debt to become worthless, and because they all share the same unit of currency, the euro, whose value reflects the collective health of all of their economies.

THE DEFAULT THAT NEVER HAPPENED

Since last year, there have been recurring crises in the investment markets in response to fears of an imminent default by Greece on its bonds. Each of those crises has been marked by steep drops in the value of the euro on the international currency markets, sharp dips in commodity prices, and other investment losses in anticipation of the same kind of chaos and market gridlock which followed the Lehman bankruptcy. But each time, Europe’s political and economic leaders looked at their options and decided that bailing out Greece was the least bad of their available options, so they reluctantly did it.

Each time, the speculators who were betting on a Greek default, and who were trying to manipulate the markets to make it more likely were disappointed. Each crisis was resolved with yet another fix or bailout package, often based upon Greek promises of economic reform and austerity which everybody knows are highly unlikely to be fulfilled.

The same thing is happening now. The Greek government has been shaken up in order to pass a highly unpopular “austerity” budget in order to qualify for the release of the next installment of bailout money to put off a looming default to another day.

When the financial markets realized last week that Europe was going to find a way to bail out Greece yet again, a six week slide in stock prices came to an abrupt end. Fears of a Greek default-induced market collapse eased, and prices stabilized.

KICKING THE CAN DOWN THE ROAD

Cynics will say that European leaders, by bailing out Greece once more without fixing its fundamental problems, or allowing it to default, has merely “kicked the can down the road,” putting off the inevitable day of financial reckoning. That criticism is accurate, with one important caveat.

The Europeans may be just putting off the inevitable. Someday, Greece probably will go into default, or be forced to give up the euro. But it won’t happen now, or in the near future, because the consequences of either event are potentially far more dangerous economically than simply putting off these actions until another day.

With that lesson in mind, we can sit back and watch the political fireworks in Greece without worrying too much about the outcome. That is because whatever happens inside of Greece, its foreign debtors understand that they cannot permit a Greek default.

Last week, Greek Prime Minister George Papandreaou shuffled his government, taking in his most powerful political foe and making him finance minister. That will enable him to mobilize his party’s majority in the Greek parliament to pass a 5-year, $40 billion austerity package which Greece’s international debtors are demanding for the next $17 billion installment of bailout money.

THE LOGIC OF ANOTHER BAILOUT

But even if the austerity package is voted down by the Greek parliament, or Papandreou’s government falls, Greece’s debtors, led by France and Germany, and the European Central Bank, will find another way to stave off a Greek default, because ultimately it is in their own best interests to do so.

In addition, there is every reason to believe that in July, European finance ministers will agree to a second bailout package for Greece, costing another $140 billion or so, because, once again, failing to bail out Greece again would ultimately prove to be far more expensive.

Of course, by doing so, the European financial ministers will only be adding to the overall size of the problem, making it harder to fix someday. But until that someday comes, economic normalcy will prevail.

These kinds of calculations should not seem strange to us. In Washington, they are made all the time. The US federal budget has been mired in deficits for a decade, and unless drastic actions are taken, those deficits will continue for the foreseeable action.

But such drastic action is politically painful. It will mean eliminating tax breaks for special interests, cutting back on entitlement benefits and slashing wasteful and unnecessary big government spending. Everybody in Washington knows that, and that continuing to run trillion dollar federal budget deficits is ultimately unsustainable. But nobody, with the exception of the GOP’s Budget Committee Chairman Congressman Paul Ryan and the Tea Party loyalists, has the courage to take the political risks to make those painful changes.