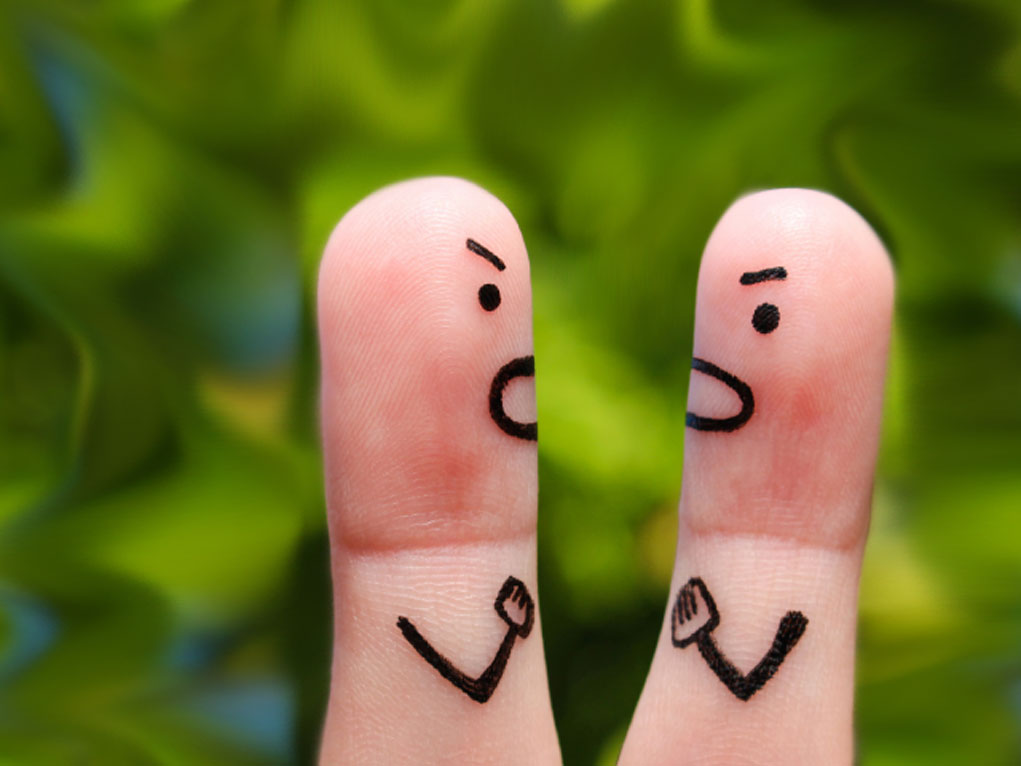 If you’re the kind of person who curls up in a ball to lick your wounds when someone hurts your feelings, this article is not for you. It won’t speak to you, because you don’t choose to speak out to others when they cause you pain. Instead, you withdraw, move inward to a safe place to compose and comfort yourself. What we might call a strategic retreat.

He (or She, as the case may be) says something that ruffles your feathers. You do not enjoy being criticized or blamed. Especially if you have a niggling suspicion that you may deserve it.

You: It’s not my fault! (Long, involved, self-justifying explanation follows).

He (or She. To simplify things, I will refer to the second party in the masculine from now on): It is, too, your fault. You just hate to admit you’re wrong.

You: That’s not true! I’m happy to admit when I’ve done something wrong… if I did!

He: (Rants on about the egregious thing he’s accusing you of having done.)

You [pouting]: You don’t have to come down so hard on me. I didn’t even mean to do it.

He: No one ever means to do things that are wrong. I don’t think you woke up this morning and said, “Hm. Let’s see how I can hurt someone’s feelings/make someone angry/betray someone’s trust today.” But you were thoughtless. You were insensitive. You were selfish. You were (fill in the blanks). You know I don’t like when you do [whatever it is he’s accused you of doing].

Up until this point, the skirmish has been localized. The weaponry is limited to things that will only cause flesh wounds. Now, watch the scope of the war expand, along with the kind of ammunition that begins to fly through the air.

You [sulkily]: I said I was sorry. You always make such a big deal over everything!

He: I wouldn’t have to make a big deal if you didn’t always… etc. etc.

What’s the magic word here? You got it. It’s the short distance between “I don’t like” and “You always…” that takes the arguers from a modest dustup to all-out war. The word “always”—or “never,” as the case may be—is a signal for both parties to pull out the heavy guns.

He begins to call on memories of other incidents in which you failed to measure up. You start remembering all the times he fell short. These memories trigger old feelings that were supposed to have been sorted out and buried a long time ago. Former forgiven actions are un-forgiven. Ancient wounds are re-opened. The battlefield is littered with the corpses of old arguments, resurrected now in aid of the present quarrel.

Drawing on these reinforcements, what began as a local altercation begins to go global. It takes on the aspect of a world war, right in your own back yard (or kitchen, as the case may be). Much more is at stake now than just a single incident. The opponents’ whole personalities are up for grabs. The entire relationship becomes a fair target.

The battlefield of the dispute stretches to cover every moment of every year of your relationship. In the shower of past shrapnel that whirls around your head, the reason for the present battle is almost lost from view.

The missiles are hurled with vigor. There are a great many of them. And every one of them is tipped with poison.

Perhaps I was wrong in excluding the licking-her-wounds type of person from this scenario. Maybe, in her quiet corner, she is not only busy consoling herself but is also engaged in exactly what her more vocal counterparts have been doing: rehashing old hurts. She’s just doing it in the privacy of her own mind instead of hurling the memories like missiles at the other.

“You’re always too busy when it comes to what I need!”

“I can never trust you!”

The accusations may be unspoken, but they are there. Along with the hurt that comes from expanding the scope of the crime, instead of homing in on the present problem and resolving it.

In fact, this kind of scene is not limited to two-person arguments. We are perfectly capable of waging such a war all by ourselves.

Suppose you did something that you’re upset about. A weakness given into. A temptation not resisted strongly enough. You’re angry at yourself, and disappointed. You’ve let yourself down. This is especially true if the wrongdoing is in an area in which you’ve been working to improve. The yetzer hara has a way of keeping a close eye on these areas, lest we grow strong enough to move beyond the sphere of his influence.

Inwardly, you berate yourself for the incident in question. You wish—oh, how you wish!—that you could go back and do it over again. You feel genuine remorse and a sincere longing to be a better person.

If you go on from there to resolve, with fresh determination, to do better next time (preferably, with some specific strategies in place to help you), you’ll be fine. The problems arise if, instead, you let your yetzer hora dig up memories of all the other times you messed up. All the times you earnestly resolved to change but did not follow through.

“You’re always so weak!” you tell yourself. “You’ll never manage to change this middah!”

Notice the shift to the insidious always-never formula. The signal to set the big guns booming.

In the ensuing battle within your own heart, you can become wounded in ways you were not wounded before. Earlier, you were upset with yourself over a single episode of weakness and yearning to do better. Now, inundated with the remembrances of past failures, you become prey to despair.

And despair, as everybody knows, does not lead to renewed strength and determination. It leads to its opposite.

If a doctor, instead of treating the injury or illness in front of him, was to start wallowing in the memories of past mistakes and misdiagnoses, the prognosis would not bode well for the patient. Similarly, when blamed for hurting someone close to us, or when accusing ourselves of falling short of our expectations, the thing to do is to focus. Pay attention to what’s happening in the here and now. Don’t allow the lines of battle to expand beyond the very limited boundaries of what just happened. Bringing up yesterday’s grudges will only lead to a greater number of casualties and a more protracted war.

I guess the message here is a simple one. However much you may be tempted to reinforce your position with old arguments and past quarrels, remember that your overall goal is not to win the battle, but rather to ride off into a peaceful sunset alongside your opponent. Remember, he is not really your enemy, so there’s no actual need to muster those extra forces. I recently heard someone quote a line that sums it up nicely: Your goal in a fight is not to win. It’s to become closer to the other party.

What we really need to do is listen to what the other person is saying so that we can respond properly. A response based not on our wistful wishes, but on the reality of the situation. On the goal of becoming better people. And on the desire to grow closer.

Most of all, let’s stay away from taking things global. In an argument as in most other things in life, the key to success is to take things one at a time. Throw all of your energy, attention, and caring into figuring out this issue and bringing it to a successful conclusion.

And let old grudges lie where they belong: buried deep, and long forgotten.