Eyewitness Account Of The Levayos Of The Paris Kedoshim 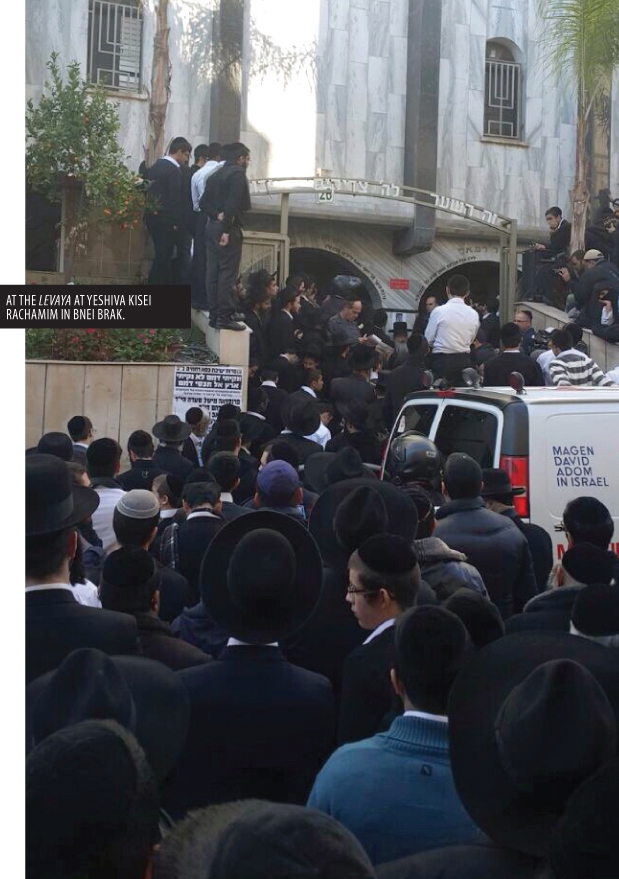 The painful scene has become shockingly familiar. A convoy of ambulances and emergency vehicles made the slow, quiet ascent to Yerushalayim, approaching Givat Shaul accompanied by the victims' grieving families and friends and a cross section of thousands of people from all over Eretz Yisroel, including many French olim, who converged on Har Hamenuchos for the heart-wrenching levayos.

Once again, an outpouring of achdus was precipitated as bnei Yisroel gathered in collective grief and sympathy for the four korbonos brutally murdered in the Hyper Cacher Kosher Supermarket on erev Shabbos.

One by one the mitos of the kedoshim Hy”d, Francois-Michel Saada, Philippe Braham, Yohav Hattab and Yohan Cohen, wrapped in taleisem, were brought up the steps by Zaka volunteers and the chevra kaddisha and placed side by side on the specially prepared large podium.

As we watched the aveilim, children, siblings, spouses and parents of the kedoshim, come forward for kriyah followed by Kaddish, the horror seemed too much to bear.

Ashkenazi Chief Rabbi Stern lead the kriyah and we felt the pain of each of the aveilim as they made the brochah of Dayan Ho’emes.

Francois-Michel Saada’s son, Yonatan, who lives in Eretz Yisroel, said, “Francois-Michel was someone really generous… all his life he put his wife, his children, [and] his friends before himself. He loved Israel. He really wanted to live here. Now he is zoche to be buried here.”

Phillipe Braham’s young, dignified almonah, Valerie bravely said a few words: “Phillipe was a perfect man. A man who always thought of others before himself, a great husband and father who lived for his children. Now you will be with our son Refael who was niftar. I’m crying, but I know that you’re all crying with me and I thank you all for that. Phillipe, protect me, Shira, Naor and Eli.” Then she said a few words in French, closing with “Todah rabah.” There was not a dry eye in the crowd.

The Hattab family came from Bnei Brak where earlier that morning there was a large levayah with hespeidim for Yoav at Yeshiva Kisei Rachamim.

Yohan Cohen had worked in the supermarket. In his hesped his uncle said, “When he stood face to face with terrorism, he did not hesitate to demonstrate courage and protected his co-workers and the customers of the store with his lif … Yohan left us too soon.”

In his hesped, President Reuven Rivlin referred to each one of the four kedoshim who were murdered because they were Yidden:

“Phillipe, you wanted to shop for Shabbat, and what is more Jewish than shopping on an erev Shabbat l’kovod Shabbat kodesh?

“Francois-Michel, the apartment that you bought here in Israel was ready for your arrival. You so wanted to make aliyah, to live here with us. But you will never now be able to affix a mezuzah upon the doorpost of your home in Eretz Yisroel… the war came to you, and the murderer’s hand destroyed everything.

“Yoav, you were here in Yerushalayim just two weeks ago for the first time. You stood at the Kotel, where you took pictures. Today, you are here for the second and the final time.

“Yohan, you could have… escaped, you could have run, but you did not surrender. You fought with the murderer to save the life a three-year-old boy. You succeeded in that, but paid with your life. Just 20 years old, and already a hero. A gibor.”

President Rivlin ended by saying that the kedoshim were brought for kevurah amongst their brothers to horei Yerushalayim. “Yechi zichrom boruch. Hashem yinokeim domchem,” he concluded.

The kedoshim were buried next to the korbonos from Toulouse terror attack, Rabbi Sandler and his two young sons, as well as 8-year-old Miriam Monsonego, murdered in front of the Jewish school in Toulouse a few years ago.

As the levayah continued, the still raw experience of the levayos of the Har Nof kedoshim in the same place, on Har Hamenuchos, loomed fresh in the hearts and minds of all present.

The mitos were slowly taken back into the ambulances as the tremendous crowd followed along the narrow road to Chelkah Deromis of Har Hamenuchos for the kevurah as helicopters hovered overhead.

Rows and rows of people had gathered at the fences of all the tiers on the steep side of the mountain above the kevorim as they silently watched the kevurah of the four kedoshim from Paris. As the final tefillos were recited, sobbing echoed throughout the mountain.