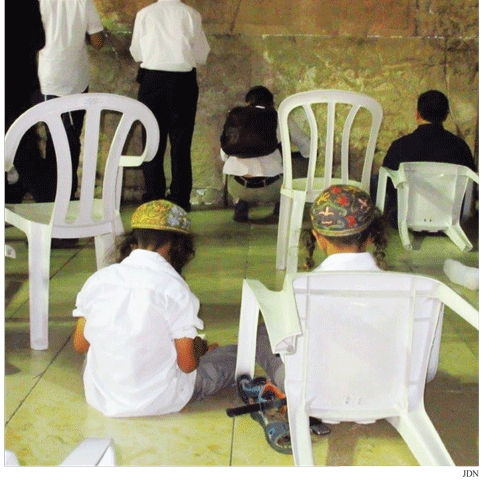 When you walk into a room where people are sitting close to the floor with ripped, dirty clothing, the atmosphere is heavy and sad. Not a word is exchanged. Then a menachem, a comforter, walks into the room. Initially, the people look at him with sad, knowing eyes. Then they slowly come alive, sharing stories of their departed loved one, exchanging reminiscences. â€œWhat do you remember?â€ they ask. â€œWhat can you share?â€ They then accept words of chizuk as expressed in the eternal words of nechomah: HaMakom yenacheim es'chem. During the first nine days of Av, we are all mourners, sitting in despair and pain. We speak of the days when the Bais Hamikdosh sat in the center of Yerushalayim. We reflect on how different and blessed life was at that time.

Then Hashem Himself arrives to be menachem us. He offers words of comfort, reassuring us and promising a brighter future. The novi loudly proclaims in words lovingly repeated ever since they were first uttered following the churban, “Nachamu, nachamu ami. Be comforted, My people, be comforted.”

On the fast day of Tisha B’Av, many of the components of other fast days are missing. We do not recite Avinu Malkeinu or Tachanun, prayers that lead to introspection and teshuvah. This is because Tisha B’Av is a day of mourning. We all know that the second Bais Hamidkosh was destroyed because sinas chinom was prevalent amongst Jews at that time (Yoma 9b). However, the Gemara in Maseches Sanhedrin (104b) points to the chet hameraglim as the cause of the destruction. It was on this day that the Jews in the desert cried for naught. Their “bechiyah shel chinom” echoes all these years, giving generation after generation many reasons to cry.

The meraglim lacked the ability to see themselves for who they were. They were reduced to the size of insects in their own eyes, because they accepted the attitudes of others as fact. They let themselves feel small and insignificant, because they viewed themselves the way they believed others did. The Jews heard their report of their mission to the land Hashem promised them and broke down in tears. “Woe is to us,” they cried. “We are being led to a country that will wipe us off the map.” They were insecure about their ability to merit Hashem’s blessing and protection. They feared that they wouldn’t be worthy of the promises that they would inherit the Land.

They didn’t perceive their own greatness.

The historical accounts of the churban Bais Hamikdosh appear in Maseches Gittin because the break between Klal Yisroel and Hakadosh Boruch Hu was a tragedy not unlike a get. The novi Yeshayahu states (50:1), “Eizeh sefer krisus imchem asher shelachtiha – Which get has Hashem sent you.”

Hashem, however, never ceased loving His people. He never divorced Himself from them. There was no get. There was a people singled out and set apart with privileges unavailable to others, yet they believed that they had been cast aside. Because they lacked self-confidence, they were easily misled and taken in by apocalyptic predictions.

Years later, during the period of Bayis Sheini, although the Jewish people were religiously committed, the rot at the root of the chet hameraglim was still present. Because the people were cynical, negative and pessimistic, they didn’t feel Hashem’s love, nor did they appreciate His proximity. They didn’t see the Jewish people as being worthy of Divine love, so they hated each other. They wrote sifrei krisus to each other because they didn’t appreciate the greatness inherent in every Yid. Insecure, they were blind to their own worth, and like the Jews at the time of the chet hameraglim, because they felt undeserving, they didn’t appreciate the gifts they had and what they were given.

On Tisha B’Av, mourning is how we repent. We sit on the floor, reciting Kinnos, recalling how good we had it, how much love there was, how close we were to Hashem, and the holiness and unity that were apparent in our lives. We bemoan the losses we suffered. We recognize through our tears how much Hashem loved us, and we proclaim that we know that He still loves us and that we are worthy of that love. That is how we repent for the sins of the meraglim and sinas chinom.

Many of our problems are rooted in the sin of low self-esteem, of not realizing who we are. People give up before starting. They are easily knocked off course and lose motivation to succeed and excel, because they don’t believe in themselves.

Last week, thousands traveled to Lakewood, NJ, and sat in the presence of Torah royalty, the Lakewood rosh yeshiva and his distinguished siblings, as they mourned the passing of their mother, Rebbetzin Rischel Kotler a”h.

While I was there, they shared many stories. Inspiring and deeply moving, they had a similar theme. The rebbetzin was heir to the gadlus of Kelm and Slabodka and sought to raise the level of all who came in contact with her.

One son recalled that the rebbetzin met a young girl, whose mother had recently passed away.

“What is your name?” the rebbetzin asked.

“No, I mean what did your mother call you?” the rebbetzin asked.

“My mother used to call me Yehudis’l.”

The rebbetzin would make it her business to see that girl, and when she would, she’d say to her, “How are you, Yehudis’l?” She would refer to her as her loving mother did when she was alive.

In the absence of a loving mother, the rebbetzin subliminally reminded her that she was still loved. Her mother was no longer alive, but there was someone else who had expectations and hopes for her.

She was worthy of love.

One day, the rebbetzin saw a yungerman shuffling down the street, his face pointed downward. She offered him pithy advice. “If you look down, you’ll see pennies,” she told him, “so why not look up and find dollar bills?”

She was an effective counselor for young couples, realizing early on that a community filled with young marrieds needs someone with a listening ear, who can provide the guidance and support of a wise friend. She became that friend, helping many families through difficult moments.

A husband came to her complaining of the shalom bayis situation in his home. She quickly diagnosed the problem. “Have you been to your rebbi to discuss your problem?”

“Have you been to your rosh yeshiva?”

“Have you told your chavrusah?”

“And everyone has rachmonus on you, right?”

“And you have rachmonus on yourself?”

“And your wife also has rachmonus on you?”

“Stop being a nebachel, looking for people to have rachmonus on you,” said the rebbetzin. “Pull yourself together. Carry yourself like a choshuve person. Buy your wife a gift. Behave with greatness and everything will work out.”

To believe that we make no difference is part of the churban.

Our response to churban is to know what we are, who are, and what we can achieve.

This, says the Sefas Emes, is what’s meant by the brochah we recite in Birkas Hamazon referring to Hashem as the “bonei (presently building) berachamov Yerushalayim.” Rebuilding the Holy City is a steady, ongoing process. At any given moment, Hashem is rebuilding Yerushalayim. It is destructive to think that we can’t play a role in that process.

When Rebbetzin Kotler’s father, Rav Aryeh Malkiel Friedman, parted from his young daughter, he knew it was a final farewell. He left her with a short piece of advice: Don’t dress like the others, don’t appear like others, and be careful to keep cholov Yisroel.

The father’s parting message was deep enough to sear itself into her young soul. What he was really telling her was, “Know who you are!”

We stand up from the floor, dusting ourselves off from Tisha B’Av’s grief, and we are comforted. No, we do not yet see the Bais Hamikdosh standing, but now we know who we are. We know what we’re capable of. We know that each of us has a role to play.

Rav Yechiel Yaakovson, an Israeli mechanech, recalled the time he was walking down a Bayit Vegan street as part of a group of bochurim speaking in learning with Rav Chatzkel Abramsky. Suddenly, something caught Rav Abramsky’s attention. He walked to a small courtyard and approached a weeping young girl.

“Why are you crying?” he asked.

“Because my friend said that my dress is ugly,” the girl replied.

Rav Abramsky smiled and said, “Well, you go tell your friend that a big rov is also your friend, and he said that the dress is beautiful.”

As the beaming girl headed off, Rav Abramsky shared an insight with the talmidim.

Our every act, word and tear has a purpose, they are not for naught, chinom. Realizing what a Yid represents is the greatest and most effective antidote to sinas chinom. Each of us carries so much power. We have to appreciate the mitzvos and ma’asim tovim of our friends and see their efforts with an ayin tovah.

In a Tisha B’Av shmuess given this year, Rav Boruch Mordechai Ezrachi succinctly commented, “One who looks at his friend with sinas chinom and mocks the efforts of his fellow Jew isn’t just a hater, but an idol-worshipper. Why? Because he wants every person around him to act as he does, think as he does, and agree with him about everything. He worships no one but himself.”

On Tisha B’Av, we see that no one is chinom and nothing they do is chinom. We re-learn how to love. We recognize that just because we look differently and act differently doesn’t mean that we are inherently different.

On Tisha B’Av, we said in unison, “Hashiveinu, Hashem eilecha… Hashem, bring us back to You…”

People all over say and sing these words with love and inspiration. Hashem, we know that Your arms are opened wide, waiting to receive us. We know that we are worthy of Your embrace.

Bring us back. Take us back. We’re ready.

Be comforted for knowing that.