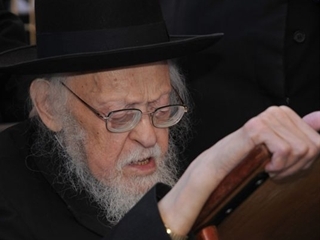 Based on a drosha of Rav Yosef Sholom Elyashiv Go to any funeral and you'll see people praising the deceased for humility, generosity, and kindness; no one will be praising him for eating a record number of hamburgers and steaks. People have a sense of what comprises good and evil. The difficulty in man's moral universe is not so much identifying which human traits are good and evil, but knowing when and how to apply them. People's moral compasses are all too often askew.
ANIMALS AS TEACHERS
The Gemara (Eruvin 100b) makes a surprising statement about the pedagogic talent of the animal world:
“Said Rabi Chiya, What is the meaning of the verse, Who teaches from the beasts of the earth, and makes us wise from the fowls of heaven? (Iyuv 35:11)… Said Rabi Yochanan, Had the Torah not been given, we would learn modesty from the cat, [avoiding] theft from the ant, morality from the dove, and good conduct from the chicken.” Observing animals can provide us with a complete instruction book of good conduct and midos, for each one behaves exemplarily in some specific way. Join them all together and you have a complete Torah.

You might ask, if we can learn everything from animals, what was the necessity of matan Torah? Even if not written on parchment, the Torah’s wisdom already existed in the physical world, right?

We can answer this by analyzing another Gemara (Eruvin 13b):

“There was a veteran talmid in Yavneh who had 150 rationales to prove that a crawling creature is tahor.” What was the purpose of having 150 rationales to prove something contrary to what the Torah actually says? Perhaps the talmid wanted to teach an important lesson. Shlomo writes in Mishlei (3:5), Do not rely on your understanding. Even if we see 150 reasons to declare impure as pure, if the Torah says otherwise it means that all our arguments are simply wrong.

It is true that without Torah we may be able to learn many beautiful traits from animals. Without Torah, however, we would not know when it was appropriate to put them into use. Our understanding might tell us that instead of learning modesty from the cat we should rather imitate its inclination to steal. Even if we learnt from the ant that it is wrong to steal, we might learn that it is only wrong to steal from one’s own kind just as the ant is only worried about taking from his nest-mates, but has no compunctions against helping itself from people’s kitchens and fields. We would understand that theft, murder, and other crimes depend on to which political or social stripe a person belongs. Without Torah, would we know that the prohibition against theft is universal and applies in every place and time?

“Said Rabi Melai, ‘As reward for, He will see you and he will rejoice in his heart (Shemos 4:14), [Aharon] merited to have the choshen hamishpot upon his heart’” (Shabbos 139a). On a superficial level, the measure for measure here seems purely geographical; because Aharon rejoiced in his heart, he was given the choshen mishpot that lies upon the heart.

Alternatively, we can understand that the joy Aharon felt in his heart came at the expense of his intellect. Logically speaking, Aharon seemed more suitable than Moshe for the job of redeeming the Jews from Egypt. He was a distinguished member of the community, “loving peace and pursuing peace” (Avos 1:12); all the house of Yisroel wept thirty days for Aharon (Bamidbar 20:29) after he passed away (Rashi ibid). If Aharon went to the people with Hashem’s message, wasn’t there a better chance he would be listened to than Moshe who had not lived among them for decades? Wouldn’t Pharaoh be more likely to listen to Aharon’s fluent words than to Moshe’s unclear diction?

Why did Hashem give the Torah via Moshe’s hands?

Why did diminishing himself make Moshe worthy to have the Torah named after him? The answer is that once the Torah was given to mankind, its halachos became dependent on man’s judgment. The Gemara says a number of times (e.g. Sanhedrin 6b), “A judge goes only by what his eyes see.” Therefore, it is critical that a person’s midos should not interfere with his decisive processes.

Because of this, Chazal say that the Torah is acquired with forty-eight kinyonim (acts of acquisition). While some of these kinyonim are related to the learning process, such as “a hearing ear” and “serving wise people,” others are relevant to perfecting one’s midos, such as “bearing a yoke with one’s fellow.” This is so that a person should annul his personality and become a transmitter of Torah as it actually is.

The man Moshe was very humble, more than every person on the face of the earth (Bamidbar 12:3). In the Gemara cited earlier, Hashem told the Satan to go not to Moshe, but to the son of Amram. Moshe had annulled himself to such an extent it was as if he had no independent existence. His moral compass pointed straight and true.