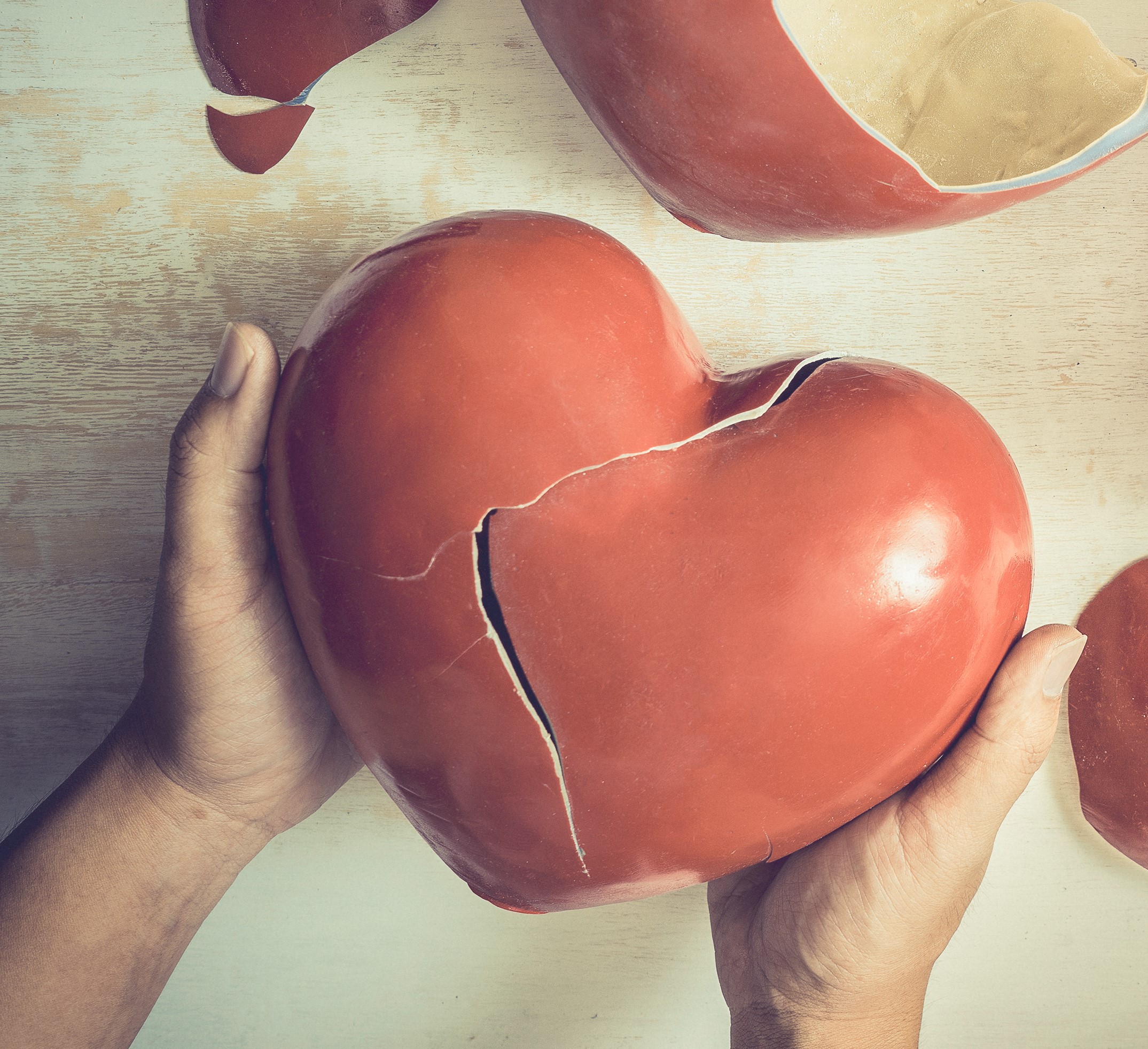 “It’s a clean break,” the doctor reassures the anxious parents. “Your son’s leg bone is going to heal, good as new.”

Broken bones do heal, sometimes stronger than before. The bone cells knit together to repair the fissure and once again present a smooth and sturdy surface. This is especially true of bones that crack cleanly, leaving no jagged edges or splintered fragments to stand in the way of proper healing.

But there are some things that do not heal as cleanly, either because they did not happen cleanly or because the break happened to something that is not subject to easy healing. Like the human heart, for example…

From the time we first learn to communicate with those around us, we open ourselves up to a host of emotional cuts, scratches, bruises and breaks. On the playground, we try eagerly to make friends with a classmate who pushes us away with an unkind word. On the block, someone taunts us and makes us doubt our lovability. At school, a teacher slaps down our curiosity or mocks our inability to grasp the material. At home, family members wield thoughtless tongues like a sword. Each night, we go to sleep with our egos a little less whole than before. Tiny, infinitesimal scratches pockmark our self-esteem.

We wake up the next morning and put on a brave face, like a shield. In time, we may adopt a tough or charming or placating manner to protect our tender hearts from further damage. And sometimes it even works. But everyone has chinks in her personal armor, places where the arrows manage to find their way in. Arrows of harshness, of criticism or of simple uncaring. How much damage those arrows inflict depends on the nature of the heart it pierces.

Everyone knows that some people bruise more easily than others. One person can smile imperturbably as all kinds of artillery bounces right off him, while a second person collapses with the pain of a single bull’s-eye. Insults wash right off this one’s back, while that one writhes in mortification. We’re all made differently, and that includes the thickness of our skin.

It’s all too easy to blame the victim, which is why thin-skinned people come in for their share of abuse. No one wants to walk around on eggshells. We want to be able to express ourselves forthrightly. If something we say ends up hurting another person, we are all too apt to blame them for being too sensitive. Secretly, we pride ourselves on being impervious to such slights, real or imagined. Of course, having a thick skin can make us oblivious to our own faults. It allows us to walk through life with a jaunty smile, filled with a kind of scornful pity for those who “can’t take it.”

Would we treat a person who was physically disabled with the same condescension? The sight of someone with broken bones arouses our compassion. Why, then, does an easily broken heart make us shake our heads with contempt? Some people are extremely sensitive to the nuance in other people’s speech. As a result, they are easily hurt. Wounding them emotionally can take far less than a well-aimed arrow; sometimes, all it takes is a needle’s pinprick. It’s just the way they’re made.

Others are exquisitely sensitive on a certain topic, usually in an area in which they have suffered. For such individuals, the mere raising of the painful topic can feel like a knife slash. Each exposure to things that remind them of their trouble stings cruelly. Their sensitivity, while not inborn, is a response to the painful circumstances of their lives. But that doesn’t make it hurt any less.

For either kind of person, unless she uses her sensitivity to manipulate others, the proper response should be compassion, not scorn.

Relationships, too, can break cleanly…or the other way.

There is an ancient Chinese torture known as “the death of a thousand cuts.” Instead of a single swipe of the sword or some other form of quick execution, this method kills a person off very gradually, one tiny cut at a time. Sadly, some relationships go this route. Their eventual demise can never be attributed to one defining moment. Rather, there is a gradual deterioration, featuring a steady stream of tiny jabs and plenty of those nasty pinpricks. A thousand almost invisible cuts can add up to some pretty hefty pain.

As everyone knows, the easiest people to hurt are the ones we know well. Familiar with their vulnerable spots, we are blessed with unerring aim. Two people whose relationship is falling apart tend to “shoot” each other that way. They aim for the heart.

There are more dignified ways to kill something off. Certainly there are kinder ones. Even if there is someone in our life who feels like an enemy, it is unworthy of us to try to take them down with a thousand painful cuts. Better to make a clean break, leaving both parties with a clear conscience, an intact self-image and a much better prognosis for healing.

Let’s get back to our tendency to blame the victim. Just as Hashem wants us to care for our physically-suffering brethren, He wants us to care for their emotional well-being as well. It’s not enough to shrug our shoulders or roll our eyes when someone lets us know that we’ve hurt their feelings. They can be slippery things, feelings. They’re hard to put your finger on, hard to pin down… when it’s someone else’s feelings we’re talking about. And therefore all too easy to ignore or dismiss.

Here’s where the imagination has a role to play. We all have areas where we are especially sensitive. Areas in which we’ve been hurt in the past, or where our self-image is a little shaky. Now, imagine someone who feels that way about nearly everything! Instead of bemoaning their “thin skin,” we can try to put ourselves in their shoes for just a second. To feel how much it hurts. How broken they feel so much of the time. It won’t be long before we realize how much compassion such a person deserves, or understand that it’s up to us to apply the necessary balm.

A person who refuses to engage the imagination in this way is basically refusing to care about anyone’s feelings but his own. He has thickened his skin to a selfish and unhealthy degree. As a result, he runs the risk of taking a leaf out of that Chinese torturer’s book. His speech will be careless because he refuses to take responsibility for the consequences.

Such an attitude can end up making a person detached from those around him. It certainly keeps him blind to the inner workings of another person’s heart.

And that, as Shakespeare might have put it, is the most unkindest cut of all.