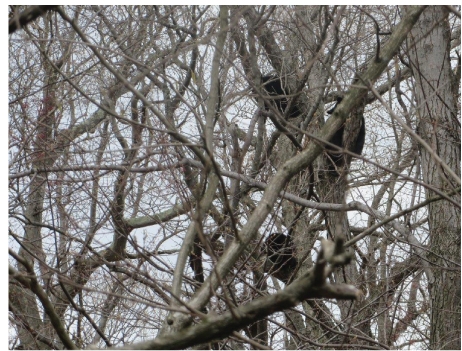 This past Sunday, a family of black bears, including a mother and three cubs, were found enjoying the beautiful spring weather in Viola Park, Monsey. Within moments, hundreds of onlookers had gathered to gawk at the bears and take pictures. Police were summoned, as were Chaverim volunteers, to deal with this potentially dangerous threat. Yated spoke to Mr. Margareten of Chaverim to get more details.

Can you tell us a bit about the story?

It actually started on motzoei Shabbos, when the police were called about some bears spotted on Michael Street, off Union Road in Spring Valley. These bears were coming from Harriman State Park, off the old Route 17, where they spent the winter. They were waking up from hibernation and were very hungry, so they came to Monsey to look for food. How do we know this? Well, the same family of bears was seen in Montebello a couple of days ago, heading in our direction. By the time police showed up on Michael Street, the bears were gone. They move quickly, and can travel long distances in a few hours.

What happened in Viola Park?

Sometime in the afternoon, Chaverim got a couple of phone calls from local residents reporting that there was a family of bears in the park. The police had already been alerted, and they called us as well. We have an excellent relationship with the local police, who rely on us for crowd control and assistance in numerous situations.

We arrived at the area of the park where they were seen, in the grassy section off Concord, which abuts with Crest Court. Hundreds of children were clustered around, pointing and trying to attract the attention of the bears, a very dangerous situation. Black bears are generally not as aggressive as grizzlies, but this was a mother and her cubs. If a mother bear feels that her babies are threatened, she can quickly become agitated and attack.

What were the bears doing?

By the time we arrived, the mother and her cubs had climbed a couple of tall trees, possibly because they felt threatened by the crowds. There was also a man with a dog, and the dog was barking at the bears, which made them nervous and agitated.

The police officers asked us to assist them in clearing the area so they could deal with the bears. We dispersed the crowds and officially closed the park. Next, wildlife experts were called to deal with the bears and encourage them to come down from the trees. Although normally they would be tranquilized with a special shot so they can easily be removed, this was not an option here. By now, all the bears were hiding in the same tree, which could have fallen down from their combined weight. Instead, we waited patiently as the bears realized that they were not being threatened and slowly came down on their own.

What time did they leave the area?

By 12:30 a.m., the bears were seen taking a walk along West Maple Avenue and were observed leaving the neighborhood. It is presumed that they returned to their home in Harriman State Park. However, now that they have become “heimish,” it is incumbent upon us to be careful not to attract their attention.

What are some of the common-sense tips to avoid attracting bears?

Number one: secure your garbage properly. These bears are hungry and will follow any scent to get food. Garbage should always be in a tightly closed bag in your garbage can, which should be sealed with a lid. The second thing is, if you ever encounter a bear, don’t shout or run away because you can frighten the bear into attacking. Simply freeze and stay where you are until the bear leaves. Another thing: if you are hiking in an area where there are bears, make some noise to warn them you are coming. Bears don’t like to be startled. Last but not least, don’t hike off the beaten path, and always go in groups. Never leave your children unattended, even for a second.