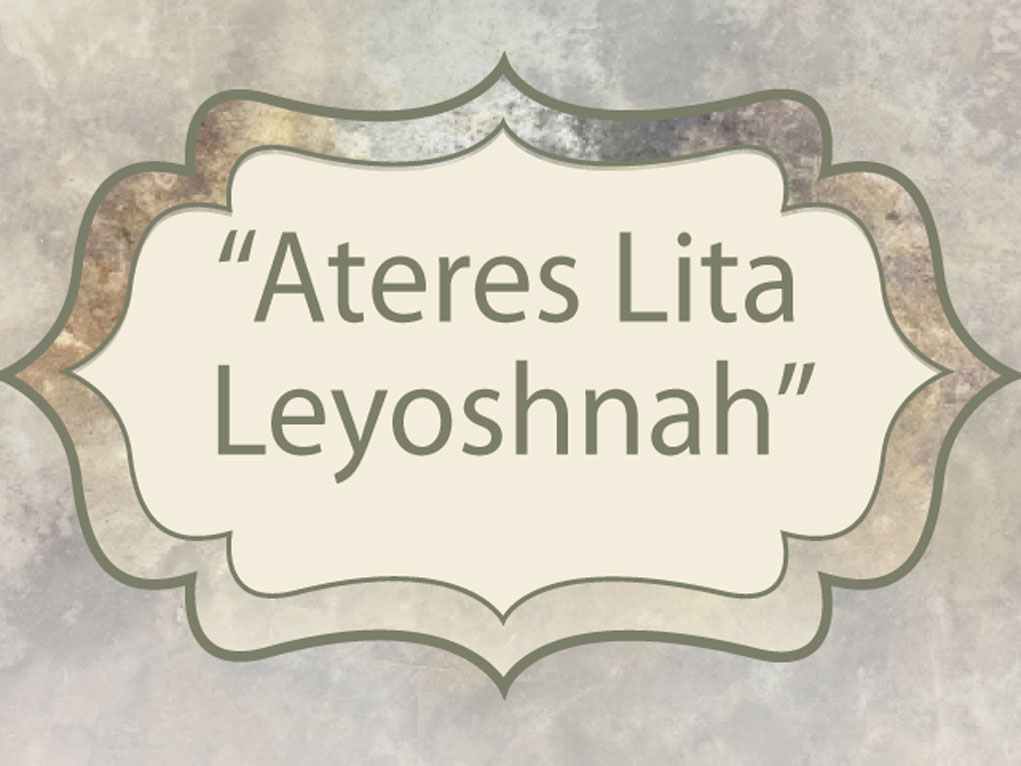 Names that cause our souls to tremble.

Rabbeinu HaGra, Rav Chaim and Rav Zelmele of Volozhin, Rav Leibele Kovner, the Chayei Adam, Rav Yossele Feimer from Slutzk, Rav Binyomin Diskin from Horodna, the Bais Halevi, the Netziv, Rav Refoel Shapira from Volozhin, Rav Meir Simcha and many, many others. Who doesn’t feel connected to these holy names? Who hasn’t learned the Torah of or heard stories about our great Lithuanian Torah leaders, the founders of the Olam Hayeshivos?

According to Jewish community records, the earliest surviving matzeivah in the old Jewish cemetery in the Shnipeshok district of Vilna dates back to the year 1487. The records show that the Jewish community legally purchased the cemetery property and the surrounding land to ensure that it would remain an eternal resting place, fully owned by the Jewish community forever. There may be as many as seventy thousand kevorim in this holy place, among them the holy graves of such giants as the immediate and extended family of the Gaon of Vilna, Rav Avrohom Danzig (author of Chayei Adam), Rav Moshe Rivkas (author of Be’er Hagolah), Rav Zelmele of Volozhin, Rav Yaakov Kahane (author of Gaon Yaakov on Eruvin), Rav Aryeh Leib Shapira (author of Nachlas Ariel on Maseches Sofrim), Rav Pinchos from Polotzk (author of Rosh Hagiva, talmid of the Gra), Rav Shaul Katzenelenbogen, and hundreds more.

In 1935, Rav Chaim Ozer Grodzensky sent a letter overseas to the Jewish Federation to request that they help ensure the upkeep of this hallowed ground. The Lithuanians were then considering building a sports complex on the cemetery land and Rav Chaim Ozer cried out that Klal Yisroel bore a responsibility to ensure that did not happen. The efforts proved effective and the decree was rescinded.

After the Second World War, Jewish religious leaders grew fearful that a hostile Soviet Union would totally destroy the cemetery, so they arranged to transfer the remains of the holy Gaon of Vilna and the others in his ohel to the new Jewish cemetery in a different district of Vilna. It is told that three of the four people involved in moving the Gra suddenly passed away within the year and that they found the Gra’s holy body complete, as it looked when he was alive. There had been no decomposition – not one iota of his holy appearance had changed, including his full beard.

In the 1960s, fear turned to reality when part of the holy cemetery of Shnipeshok was desecrated by the Soviets, who constructed a small sports stadium in the middle of the area. Soon after 1991, when Lithuania declared its independence from the Soviet Union, the building ceased to be used and was left to deteriorate. Between the years 2005 and 2008, Lithuanian and municipal authorities permitted a developer to build apartment complexes on the site of the cemetery. Despite international protests, two apartment complexes were indeed erected. A 2008 ground radar survey showed thousands of graves and bones being excavated to make room for that construction, Rachmana litzlan. However, the majority of the cemetery remained – and still remains – intact.

In 2015, the Lithuanian government announced plans for the renovation of the old sports complex and further development. Their claim that the state-owned bank had purchased the property goes against all logic, as the site had been legally owned by the Jewish community for hundreds of years. Fortunately, significant pressure from Jewish leaders throughout the world and U.S congressmen halted their plans for several years. But now, post-Corona, although the government seems to have abandoned their original plan to convert the site into a convention center, they are talking about turning the sports stadium into a museum (with a memorial plaque for the Jewish cemetery!). These plans are being condemned by members of Jewish communities and leaders throughout the world. Only continued pressure will, with siyata diShmaya, prevent these evil plans from coming to fruition. 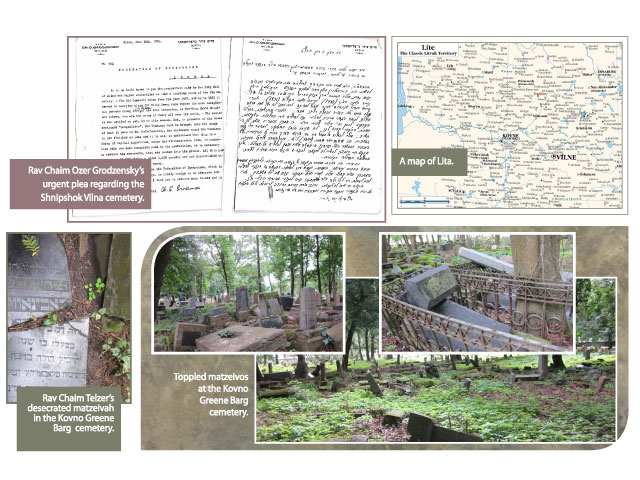 The cemeteries of Kovna, Shavel, Telz, Vilkomir, Kalavere, Ponovezh, as well as 450 others throughout Lita have unfortunately become neglected after the murder of over ninety-five percent of Lithuanian Jewry by the Nazis ym”sh and their Lithuanian collaborators. Many of our greatest leaders and gedolei hadoros are interred in these botei kevaros. Some of these botei kevaros are not even gated anymore, many of their matzeivos have long been stolen, and the remainder are sinking or toppled, surrounded by garbage strewn about and overgrown bushes.

This past week, rabbonim and askonim, among them descendants of some of these Lithuanian gedolim, rabbonim, roshei yeshiva and erliche Yidden, and others who feel connected to the yeshiva world, formed a committee and gathered to discuss what can be done to stop the neglect and to salvage the holy burial grounds throughout Lithuania.

One of the resolutions adopted at the meeting was to create immediate political pressure by lobbying our local government officials to press the Lithuanian government to gate off the whole cemetery area at the very least. This would ensure that it would be properly marked and it would not be trampled on. Another idea was the opening of a kollel in Vilna, which would give Orthodox Jewry a stronger voice through having local representation. Other ideas are still being developed for the future.

Time is of the essence. It seems that just this past week, the Lithuanian government marked off the area around the old stadium in preparation for imminent construction work. Any digging would be a desecration of the site and can only be done under rabbinical oversight to ensure that halachic guidelines are followed.

It is hoped that this new committee will promote awareness of the imminent danger facing the famed Shnipeshok cemetery and will likewise help restore the appropriate kavod hameis to the gedolei Lita and mechabrei seforim who lie in other cemeteries scattered throughout Lithuania. 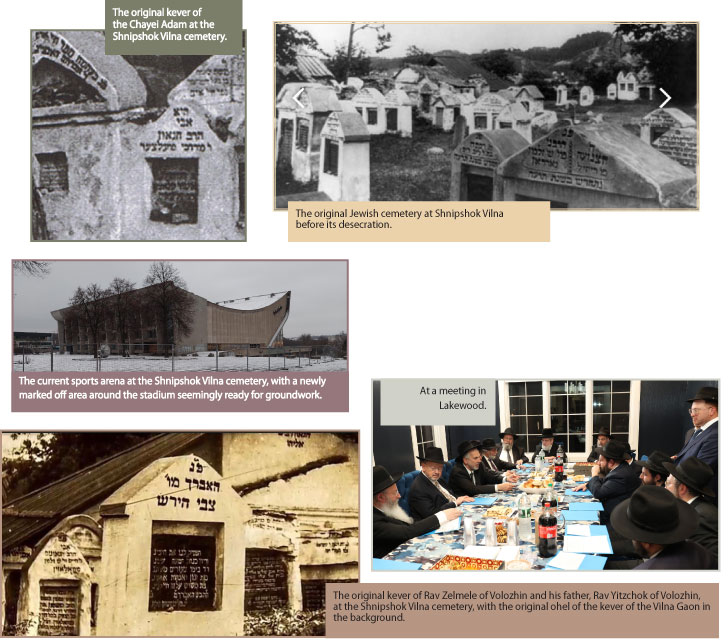