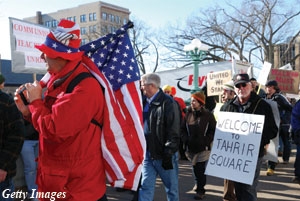 The battle now going on in Wisconsin over the proposal by its newly elected governor, Scott Walker, to remove many of the collective bargaining rights of the state's public employee unions, and the battle in Washington over the deep cuts in spending for the balance of the current fiscal year passed by House Republicans over the weekend, may seem on the surface to be separate events, but they are not. They are parts of a larger political war between Democrats and Republicans over whether to get serious about attacking the root causes of the chronic deficit spending which threaten to bankrupt our country. Republicans have finally stepped up to this problem, both on the state and federal levels, and proposed not only necessary spending cuts, but also more fundamental changes to the system to address the underlying causes of this country's runaway government spending problem. On the state level, these include the imposition of limitations on the collective bargaining rights of public employee unions, as proposed by Governor Walker, which have been driving up government's labor costs. The Republican governors, led by Indiana's Mitch Daniels, also are demanding significant modifications to key provisions in the implementation of Obamacare on the state level, to prevent a further expansion of unfunded federal mandates which the states will ultimately have to pay for. Finally, governors across the country from both parties are now making painful but necessary cuts in public school spending and Medicaid benefits as the only way to balance their budgets for the coming year.

On the federal level, House Republicans have already proven that they are serious, by passing a budget for the balance of fiscal 2011 which makes deep cuts, not only in Democrat-supported programs, but also to sections of the federal budget which have traditionally enjoyed strong Republican support, including defense spending and medical research.

On the other hand, the Democrats, while claiming to be serious about cutting deficit spending, are in fact proposing to continue overall government spending at about the same levels. They are pretending to pay for it by proposing the same tax increases which Obama has just abandoned in fashioning his December compromise with Republicans to extend all the expiring Bush era tax cuts over the next two years.

As conservative trailblazer Rush Limbaugh points out, when President Obama says “it’s time to live within our means,” he is not serious. If he were serious, he wouldn’t turn around and propose a budget that only pretends to make serious reductions in the deficit over the next decade. His budget proposes a continuation of the out-of-control government spending of the last two years, and a thinly veiled dare to Republicans to take the political risk of proposing cuts that are deep enough to popular spending programs and entitlements to bring the deficit down quickly, and stop digging this country even more deeply into the national debt hole.

To their credit, congressional Republicans, who largely ignored the ballooning debt problem during the Bush years, are now stepping up to that challenge. They are doing so partially at the insistence of the Tea Party activists who powered their midterm election victory. The Republicans are also trusting that the American people are mature enough to understand the necessity for making these painful cuts, and will support them at the polls for working to bring down the deficit.

The Obama administration admits that government spending and deficit projections in the 2012 budget it just proposed is “unsustainable” in the long term.

That startling public admission came last week from Treasury Secretary Tim Geithner, in Senate hearings on the budget. Republican Senator Jeff Sessions of Alabama asked Geithner about the budget’s projection of steady growth in debt service interest payments from $187 billion in 2009 to $844 billion in ten years, even assuming that interest rates increase only moderately from current levels.

Geithner responded by agreeing with Sessions, “absolutely. It is an excessively high interest burden. It’s unsustainable.”

He then went on to deny that it was the administration’s responsibility to cut government spending and deficits to avoid what he had just agreed was an unacceptable outcome.

Sessions pointed out, “Well, it’s your plan! For the ten years. I mean, that’s the one the president has submitted! That’s what he’s asked us to vote on. It will result in this — and that’s your numbers, off your budget.

But he said that it was not the administration’s responsibility to deal with the unacceptable consequences of out-of-control government spending which it has initiated.

He claimed that it was up to the opposition Republicans to offer the painful fiscal solutions to the federal spending problem for which it has not been at all responsible over the past two years.

“That’s why we’re having the debate,” Geithner said. “I completely agree with you [that the debt burden is unsustainable]. But the question, though, is — just to be direct about it — what’s the alternative plan?”

REPUBLICANS HAVE A PLAN, AND DEMOCRATS DON’T

In fact, the Republicans do have a plan, as spelled out by the Tea Party activist candidates during the midterm election campaign last year, and by conservatives in Congress who are serious about imposing fiscal responsibility on government, such as Wisconsin Congressman Paul Ryan, the new chairman of the House Budget Committee.

Democrats have been betting that they can get the public to reject the Republican proposals as too extreme, using the same kind of demonizing tactics and arguments they have used for years. But if the public does not succumb to those scare tactics, Democrats have a serious problem, because they do not have a serious plan to deal with the deficits, as Geithner’s shocking testimony last week demonstrates.

That conclusion is also supported by the fact that Obama’s 2012 budget contains none of the many budget balancing proposals suggested by his own bi-partisan commission to solve the deficit problem.

Behind the scenes, Democrat congressional leaders and the Obama White House have not been able to agree on a counter-plan in response to Republican spending cut proposals.

The New York Times last week reported on a discussion during a closed-door White House meeting in which Democrat Senate Majority Leader Harry Reid, Senator Charles Schumer of New York, and three other Senate Democrats rejected a suggestion by Majority Whip Richard Durbin to include Social Security in proposed comprehensive deficit-reduction negotiations with the Republicans who control the House.

The negotiations would presumably use the presidential debt commission’s recommendations as a starting point. These include establishing mandatory caps on discretionary and entitlement spending that lawmakers in Congress would then have to meet, either through specific negotiated spending reductions, or automatic, across-the-board spending cuts if they fail to agree.

On taxes, the negotiators would have two years to find agreed ways to raise revenue by simplifying the federal tax code, and killing specific deductions and credits, while at the same time lowering overall tax rates.

If Democratic negotiators are forced to take Social Security out of the discussions, the whole negotiating scheme is likely to collapse, according to Erskine Bowles, a former Clinton White House chief of staff who was one of the co-chairmen of the deficit study commission.

Senator Tom Coburn, one of the Republicans interested in such bipartisan negotiations, agrees. He says for such talks to get off the ground, the “purists on both sides” need to abandon their traditional positions. For Republicans, that would mean a willingness to re-examine all current tax deductions and exemptions, and for Democrats, it means putting all the current entitlement programs on the negotiating table. “For a deal to happen, Social Security needs to get fixed,” Coburn emphasized. But the Democrats are not ready to do that. They are too frightened of the reaction from the liberal special interest groups who have long defined their political agenda.

THE QUESTION FOR WHICH DEMOCRATS HAVE NO ANSWER

Democrats who adopt that stance do so at their political peril. As a group of Democrat senators at a party strategy conference last week learned from one of their own trusted pollsters, Republicans with their new determination to cut spending are winning the public debate over how to deal with the budget deficit.

According to Bloomberg News, the polling data backing up that conclusion was presented by Geoff Garin, president of Peter D. Hart Research Associates. It highlights the dilemma for Obama and Democrats as they start planning for the 2012 campaign. While Republicans are now proving that they are serious about cutting federal spending, the Democrats still cannot agree among themselves as to what they are willing to cut, and by how much.

Until they can come up with answers to those basic questions that all Democrats can accept, their campaign platform for the 2012 election, in which the deficit is likely to be a major issue, will be incomplete.

It is not hard to imagine Democrat candidates across the country next year being asked the same question by voters that Senator Sessions asked Secretary Geithner last week. Until the Democrats can come up with a better answer than the one Geithner offered, they are likely to be in deep trouble.