A Tzaddik in a Tank 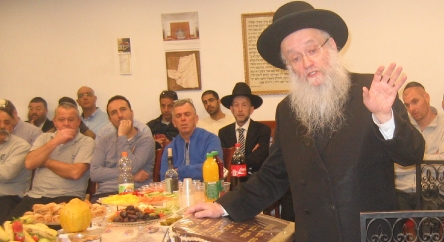 Shmuel Orland Hyâ€d was burned alive in his tank during the Yom Kippur War. On Motzoei Yom Kippur, while he was on his way to the front lines, someone threw apples into the tank, perhaps to give the soldiers something to eat after the fast or merely as a form of encouragement. Shmuel refrained from eating the apples due to the laws of Shmittah. Several days later, he was killed in the war. Here's the moving story told by Rav Yosef Efrati.

Rav Yosef Yekusiel Efrati, the right-hand man of Rav Yosef Shalom Elyashiv zt”l and the head of a bais medrash for the study of halachah, is considered the foremost expert on the halachos pertaining to agriculture, including the laws of Shmittah. This year, of course, is a Shmittah year. As time goes by, Shmittah observance seems to be growing simpler, as the various Badatz organizations have been doing everything possible to simplify the process for the Jews of Eretz Yisroel. At the same time, there are many who observe additional chumros, taking care to renounce ownership of their Shmittah produce at the appropriate time and setting aside special garbage bins in which to dispose the peels of fruits and vegetables that are treated by the machmirim as possessing kedushas Shvi’is.

Recently, an event was hosted at a large shul in Yerushalayim that caters mostly to working men, where the members decided to invite a guest rov to deliver an inspiring drashah on halachah. Rav Efrati was selected as the guest speaker, a choice that turned out to be right on target. The audience listened in rapt attention as he spoke, and his address left them amazed – both by the rov himself, whom they had never seen before, and by the content of his speech.

A table was placed in the center of the shul, with a white tablecloth spread across it. The table was filled with specimens of the unique fruits of Eretz Yisroel. It was a colorful, attention-grabbing display. The shul was packed from wall to wall. Rav Efrati, with his regal bearing, dazzled the audience with his speech. His skill in reaching every member of his audience was evident. This is what he said:

“We will not be able to discuss all the halachos of Shmittah today, but we can at least make note of what Chazal teach us about the virtues of those who observe Shmittah. Chazal describe Shmittah observance as an act of mesirus nefesh. The Medrash states in Eichah Rabbah that the non-Jews used to mock the Jewish people for observing Shmittah. They would bring an emaciated camel into a Roman amphitheater and declare, ‘Why is this camel so thin and gaunt? It’s because the Jews are keeping Shmittah and eating all of its food!’ That is how the Romans would laugh at the Jews as they endured the trials of Shmittah.

“It is no wonder that Chazal teach, in the Medrash Rabbah on Tehillim, that the Jewish people are called ‘gibborei koach osei devaro – mighty heroes who do His bidding’ for two accomplishments. One of those accomplishments was their proclamation of ‘Naaseh venishma.’ The Jewish people had come from Mitzrayim, and Hashem asked them if they were willing to receive the Torah. Without even knowing what it said, the entire nation declared in unison, ‘We will do and we will listen!’ And that made them ‘mighty heroes,’ through the power of their emunah and their trust in Hashem. Unlike any other nation, the Bnei Yisroel were willing to accept whatever Hashem would command them.

“Two lines later in the Medrash, Chazal continue that this phrase, ‘gibborei koach osei devaro,’ also applies to those who observe Shmittah. It is a mitzvah that must be kept not only for a day, not only for a week, not only for a month, but for an entire year. And you must keep in mind that this mitzvah calls for the cessation of agricultural work, which was the primary source of livelihood for the entire world. Every Jew – like every farmer and like everyone else in the world – made his living from agriculture. And the Torah commands us to desist from working the fields for an entire year. Moreover, the Medrash adds that the farmers would continue paying taxes nonetheless, and they did not protest. They accepted in silence everything that Hashem decreed. This was the might of the Jewish people.”

That part of the speech was certainly to be expected. The ideas were well-known, even if some of the attendees at the speech – many of whom were not exactly observant – were not familiar with the concept. In any event, the audience was riveted not only by the content of his address, but also by the manner in which he delivered it. He simply has that knack. At this point in his speech, Rav Efrati shared two stories.

“There is no mitzvah like the mitzvah of Shmittah,” he declared. “It is a mitzvah that demonstrates the faith of Klal Yisroel and a degree of strength that is difficult for us to fathom. I am coming to you now from a place where there is a group of gardeners who are sitting and learning in a kollel. This is a phenomenon that has developed significantly throughout the State of Israel. These people are professional gardeners who studied in universities throughout the world. One of them is a graduate of Oxford. When the Shmittah year arrived, they announced that they were prepared to continue working for their customers, but only within the bounds of halachah. This brought down the volume of their work by a very high percentage. You look at these people and wonder, ‘Where did they find this strength?’ They are even taking the risk that the customers who left them and found other gardeners to employ will not hire them next year either. But they are willing to take the risk, and this makes them gibborei koach.

“I met a farmer from Yesod Hamaala who does not wear a kippah and does not appear to be observant. Every year, this man grows dozens of dunams worth of fruit. This year, he is growing nothing. He has declared all of it hefker, and he is not performing any prohibited melachah. People are laughing at him right and left; they are literally mocking him. I won’t say that it’s the same as it was in Rome, but it is happening here in Eretz Yisroel. Yet this man is maintaining his resolve with pure, simple faith.”

Toward the end of his speech, Rav Efrati surprised his audience with a story that moved many of them to tears.

“Let me conclude with a story that came to my attention several months ago. When I was young, I learned in a yeshiva called Kerem B’Yavneh, which is a Hesder yeshiva. In the year 5734, on Yom Kippur, the Yom Kippur War broke out. Four weeks ago, I was at a simchah where someone asked me if I remembered a certain bochur who had learned in Kerem B’Yavneh with me. His name was Shmuel Orland. I confirmed that I knew him. He was older than I, but I remembered him nonetheless. ‘My name is Chaim,’ the man said to me, ‘and I am his brother. We put out a book about him and I would like to give you a copy of the book as a gift.’

“‘You put out a book about him?’ I asked in confusion.

“‘Yes,’ Chaim replied. ‘He was killed in the Yom Kippur War. May Hashem avenge his blood. This is a memorial volume.’

“As soon as I received that book, I became oblivious to the simchah taking place around me. I was simply lost in the narrative. Listen to what the book says about him: On Motzoei Yom Kippur, everyone was rushing to the front lines. This bochur, who had transferred to a different yeshiva by that time, was also rushing to join his brigade. There was a man standing on a bridge, presumably from one of the kibbutzim or other communities in the vicinity of Rosh Pina, and he was throwing apples to all the soldiers in the tanks. It was possible that he knew the soldiers were hungry after the fast, or perhaps he simply wanted to boost their morale. In any event, two witnesses related that Shmuel refused to eat the apples. Those witnesses weren’t in his tank. All of the occupants of that tank were later burned to death. But they knew that Shmuel would not eat the apples. They asked him why, and he responded, ‘The year 5733 was a Shmittah year, so the apples have kedushas Shvi’is, and I am not sure if the people who grew them observed Shmittah properly. There is one view in halachah that it is prohibited to eat fruits if their owner did not declare them hefker when he was supposed to do so. The Chazon Ish actually ruled leniently about this, but there is a view that is machmir, and I prefer not to eat the fruits.’”

Rav Efrati’s tone was somber. He gazed at his audience and continued, “Do you hear this? Here was a young man, sitting in a tank and starving for food, who refused to eat those apples. He didn’t care that the halachah says that all forbidden foods are permitted for consumption during a war. He didn’t even care that most poskim would have permitted him to eat those apples under any circumstances. He was machmir! This was the height of Shmittah observance.

“If a person truly believes in Hashem and His Torah,” he concluded, “he will know that not only will Eretz Yisroel not be harmed when we keep Shmittah properly, but it will even give us the supernatural ability to strengthen the land, to observe its mitzvos, and to prepare the Jewish people to greet Moshiach.”