A Shoemaker For Our Times 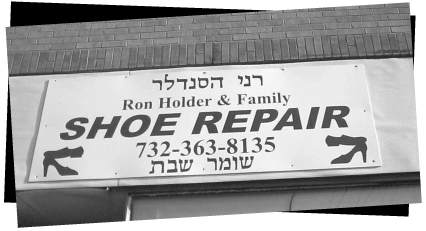 There is nary a word in the English language that can conjure shtetel imagery like shoemaker. Ah, the shoemaker. That humble, apron-clad man sitting by the window, pounding away by the candlelight with his tools and instruments, as the snow drifts climb higher and higher on the cobblestone streets. Simple, unlearned, yet pious, he patches Yankel the woodchopper's thick boots and carefully crafts a new pair for Reb Moshe the g'vir. Sounds idyllic, right? I'll soon have you craving kasha varnishkes and a glass of unsweetened tea.

Okay, reality check. We are no longer in the eighteenth century and shoemakers are few and far between. Brick, Howell, Jackson, Toms River and many other New Jersey towns have no shoe repair shops to speak of. Here in Lakewood, one of the few American towns that can still claim some connection to shtetel-hood, we do have a real live competent shoemaker. But that’s where the similarity ends. This is not the unlearned cobbler of yore, but a man who has finished Shas and can be seen with a sefer when business is slow. He is a man who opens the doors at K’hal Zichron Yaakov, Rav Shlomo Gissinger’s shul on Sunset Road, at 5:15 a.m. and serves as the morning minyan gabbai. Such a thing would have been unheard of in many towns in Eastern Europe. So it’s safe to say that Ron Holder is not your stereotypical shoemaker.

“Going into shoe repair was certainly not my idea,” Mr. Holder, who moved to Lakewood from Denver, Colorado, in 1989 recalls. “I had been working as a chef and mashgiach in the nursing home industry and the long hours as well as the nature of the job had started to take a toll on me. My neighbor and rov, Rav Shlomo Gissinger, knew I was looking to change careers and suggested I enter this field. I was flabbergasted, to put it mildly.”

And rightly so. The industry was and is a fading one. Mr. Holder says that in just the last four or five years, he knows of eight shoemakers who have sold their equipment and closed up shop. After looking around and inquiring about the field, his suspicions were confirmed. But Rav Gissinger was unrelenting.

“I guess he must talk to G-d,” Mr. Holder quips, only half joking. “He was insistent. He must have felt that Lakewood needed a shoemaker and would support one. He went to great lengths to ensure that I would be able to break into the field, setting up an apprenticeship, arranging the purchase of my shop, even helping out with the financing.”

Before he knew it, Ron Hasandler – a name also chosen by Rav Gissinger – was in business.

After purchasing his little store on Fourth Street off of Clifton Avenue from a man who had been commuting from New York, Mr. Holder began to build a devoted clientele. The early years were especially hard, as he continued to work as a cook in a nursing home while developing his skills and his customer base. His wife and daughters pitched in, manning the operations when he was unavailable. Slowly but surely, Mr. Holder eased away from the culinary world and devoted himself full time to shoe repair. Over the fifteen years he has been in business, he has patched, sewn, tapped, soled and rubberized the shoes of thousands of Lakewooders, including those of the four roshei yeshiva of Bais Medrash Govoah.

What keeps people coming back is his reputation for quality and value. Being Lakewood’s only shomer Shabbos shoemaker is also a factor, as people seek to support a man who shares their values and traditions. His forthrightness and trademark humor have endeared him to all who enter his little niche. But perhaps his most winning trait is his unfailing honestly. He has told countless people, including this writer, that although the shoe can be fixed, it’s simply not worth the money. Knowing they’ll get a fair shake is what keeps the Lakewood olam coming back to Ron Hasandler.

“There is a myth out there that a bad economy equals a boom for shoemakers. That’s not necessarily true, because people are willing to buy cheaper shoes that are not as strong, throw them out, and repeat the process. So just because people are spending less on purchasing shoes doesn’t mean that they are taking them in constantly for repairs.”

Spending a little more and taking care of your shoes can have a real impact, making them last for years. But regardless of how much you spend, Mr. Holder says that proper care can extend your footwear’s shelf life.

“People who value their shoes take good care of them. I’ll give you an example. If you buy a pair of shoes with a leather sole, putting on a thin strip of rubber on the bottom can virtually guarantee that it won’t rub out for a year. This can be repeated when the year is up. So for just a few dollars you can save yourself the cost of a new pair of shoes. I just had a customer who came back for his seventh sole protector! I told him enough is enough. At some point, you just have to say a nice little hesped on those shoes, no matter how much you love them.”

So why don’t people avail themselves of this service?

“Those are the people who haven’t entered the tuition stage,” he laughs. “Once you’re paying tuition, your need to be makpid on style tends to fade.”

Although we can all stand to take better care of our shoes, Holder admits that as Jews, we do start off a little behind the eight ball.

“Think about it. A goy doesn’t really walk anywhere in a good pair of shoes. When he goes to a reception or service or any other social event, he drives. He also has about six or seven pairs of shoes, unlike us, who tend to have just two or three. We also march around all Shabbos to shul and back, to this kiddush and the next one. Bar mitzvah boys are walking from one end of town to the other nearly every Shabbos in hot pursuit of that piece of kugel at their friend’s kiddush. There is no way to completely eliminate the wear and tear on those high quality dress shoes. Forget about women’s heels. The piece they put into the bottom of the heel is designed for two or three usages. Add to that the clicking along the sidewalks every time you go to a chasunah and you can wreak havoc on those heels. Women come in to get them replaced and they ask if I can do something to make it last longer. Unfortunately, I can’t. That’s the way they are designed.”

So what can be done?

“Well, ideally, you should rotate your shoes, changing every other day if possible. The leather has to be allowed to breathe, and it can only do so if it is worn a little less often. If you’re a working woman, take those fancy heels to the office in a bag and change when you get there. Don’t abuse them on the sidewalk. Have your child change into a different pair during recess when he plays outside. That was the norm when I was a kid, although I understand that’s not really the case now. But the truth is that you didn’t buy your kids lousy shoes; they are just misused. And get that sole protector. It can make all the difference.”

He adds one more piece of advice, this one somewhat surprising. “Polish your shoes,” he says. “Not with those liquids, but with the wax. Polishing your shoes is not just for aesthetics. The wax actually nourishes the leather and makes it water repellant. It’s ironic to me that that was my Erev Shabbos job as a kid, to polish my father’s shoes.”

Over the years, he has come to recognize some brands as particularly well built shoes, while others are decidedly less so. “Allen Edmonds. Alden Massino Mateo, Brass Boot, Hugo Boss, Florsheim and Mezlan are some of the companies that make real high quality shoes. Some of those are pricey models, but others are quite affordable. Among the ones I don’t recommend are Zengara, Steve Madden, Stacy Adams and Solo.”

With the onset of the 21st century, industries seem to come and go faster than a mouse click. Within those fields, craftsmen are constantly seeking an edge to maintain their relevancy and adapt their craft to a rapidly changing world. The shoe repair business is no different. Mr. Holder is doing things that the medieval cobbler wouldn’t have dreamed of.

“I do a lot of work repairing orthopedic insoles,” he says. “I don’t build them from scratch, but I do repair them. Dr. Lancz, a local podiatrist, has sent me many customers. I build up shoes for people who need that kind of work due to an irregularity in the length of their legs. Recently, I bought a Claes machine, which allows me to stitch purses, tefillin bags, pocketbooks, backpacks and lots of other items.”

This has brought him a whole new clientele.

“I have policemen, state troopers and others coming in to stitch up torn gun holsters and boots. The troopers also get their boots polished to a high sheen. I had a detective come in to fix an ankle holster. So it’s been a really interesting mix.”

Keeping up with the changing trends in fashion has also allowed Mr. Holder to bring in lots of different colors in the shoe polish line, each one slightly different, to perfectly match every shoe. Along the shelves that line his shop, pinks, blues and greens abound. The polishes sit near another whole line of insoles and inserts that can help the shoe fit better when you find yourself in between sizes.

“I get customers who like to buy a shoe that is a little big at the beginning of the school year. This way, the child can grow into it and it will last all year. I carry a large variety of items that can help make that shoe fit better until the foot grows a little.”

So walk into that little shop on your next trip downtown. You’ll be greeted by a typical Lakewood scene: a man bent over his Gemara. But you’ll also get a taste of that old world charm. It smells of polish, worn leather…and maybe a nice glass of hot tea.