The Wonderful World of Tal and Matar 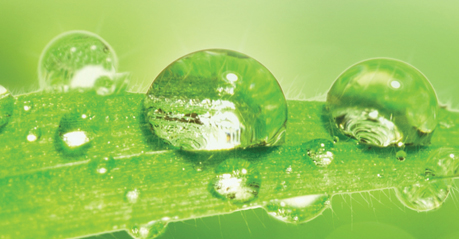 We have been saying vesein tal umatar for about a week now, asking for the blessings of dew and rain. Perhaps we have become accustomed to the change from vesein bracha, although halachically it will take a while longer unless we took the trouble to recite the phrase 90 times. But have we internalized this wonderful opportunity for a double blessing in our lives? Let us explore a bit of this marvelous annual zechus to bring two special sources of beneficence into our lives.

The Medrash (Bereishis Rabbah 39) records the trepidation of Avrohom Avinu that he had spent years worshipping idols under the aegis of his father, Terach. However, Hashem reassured him, “You retain the dew-like freshness of your youth” (Tehillim 110:3). Just as the dew flies off, so do your sins fly away.

The second rebbe of Sochatchov (Sheim MiShmuel, Lech Lecha 5671, page 86) seeks to understand the nature of the dew metaphor. In doing so, he quotes the well-known Gemara (Taanis 4a) that Klal Yisroel asked that Hashem relate to us as rain, but Hashem responded that He would relate to us as dew. He quotes, as he does so often, his father, the Avnei Neizer, who explained this dialogue as follows: We wished for G-d to bring us a permanent blessing, just as the rain irrigates the earth and remains to make it moist and soft. However, Hashem responded, “No, in that case the bracha would be extraneous to you. However, I will bless you as the dew, which arouses the innate moistness in the grasses themselves and then flies off, leaving the blessing which is already there to come forth. So it is with Klal Yisroel, which has the power of bracha within itself, but only requires its awakening.”

The Sheim MiShmuel himself adds that this is similar to the neshamah yeseirah, the enhanced soul, which joins us every Shabbos and then leaves. Its presence brings out the holiness and purity within us, which allows us to serve Hashem all week long.

This profound understanding of the power of tal, dew, in our lives sheds light on many aspects of our avodas Hashem, wherein it often becomes clear that Hashem is bringing out the best within us through various tests, trials, tribulations and experiences. But what remains to be explained is that, if so, what indeed is the role of rain, since we have been praying for both and will continue to do so until Pesach?

Furthermore, the structure of Maseches Taanis and the moving tefillos we recited on Sukkos all revolve around our need and seasonal plea for geshem, rain, which it is understood represents all gashmiyus – physical and material needs – we may have.

If, as the Medrash (Shir Hashirim Rabbah 8:5) puts it, “Klal Yisroel asked improperly” when we implored Hashem to bless us like rain, why has the prayer remained such an important part of our avodah and liturgy?

The answer, of course, is that we do require rain and all the gashmiyus it represents, but we misunderstood the rain-dew relationship. We thought that it was best to ask for something as an outright gift, as the righteous always do (see Rashi, Devorim 3:23). However, Hashem taught us, through His nevi’im, that tal, which precedes matar, teaches us that first we must perfect ourselves. Indeed, the rain metaphor reminds us that there must be an appropriate vessel to receive the blessing. If it is broken, unclean or filled with extraneous matter, the blessing cannot take place. In fact, as the Sefas Emes (Sukkos 5648) concludes, “The Bnei Yisroel are privileged to receive rain from the hand of Hashem Himself.” One must wonder at this assertion. Doesn’t everyone in the world receive rain? What is the uniqueness of how we receive this bounty from heaven?

The answer is clearly our entire history, as reflected by Maseches Taanis. We, in fact, do not receive the rain unless we are worthy. When we unfortunately are not proper receptacles, it is our heavens that are dry and it is we who must fast. Thus, even the rain comes to us as the Sheim MiShmuel described the dew. It is that which is within us that brings the long-awaited cloudbursts and welcome precipitation.

The Vilna Gaon (on Mishlei 25:14) helps us understand the dew/rain paradox more deeply. He states that “rain is actually charity from heaven, for the earth has nothing of its own.” I believe that the Gaon here is reconciling for us the problem of tzaddikim asking for a matnas chinom, the righteous knowing that everything is a G-dly gift and the need to earn our keep in His world (beginning of Derech Hashem). We must always do everything in our power to prove worthy of Hashem’s kindness, while constantly recognizing that whatever we do cannot possibly rise to the level of G-d’s infinite chesed, so that it remains forever an outright gratuity.

As the Vilna Gaon teaches elsewhere (Divrei Eliyahu to Taanis 7a), “The philosophers claim that everything in the world is controlled by nature. However, when it comes to rain, they must admit that this phenomenon is purely supernatural. Sometimes it does not rain at all and sometimes it rains daily. This is why [Chazal] refer to it as the power (gevurah) of rain, for through it one can recognize the hand of G-d more than in anything else.”

Now, we all know that in our days, scientists certainly try to explain rain in empirical and technical ways. Yet, as we also know, even the most sophisticated of weather reports often fail miserably. I can remember as a child listening to the Yiddish language radio station WEVD, where the weather report was given by the veter novi. When one day he completely miscalculated a massive snowstorm, he confessed the next day to having been a novi sheker.

My rebbi, Rav Yitzchok Hutner zt”l, explained the Vilna Gaon in terms that even the most modern meteorologist would have to accept. “Rain,” he asserted, “is still the only component of our lives that comes directly from heaven. One must look up, not down or sideways, to see this gift which clearly comes from heaven alone.” Perhaps others have noticed this, perhaps not. But Klal Yisroel has clearly integrated this ongoing miracle as our regular reminder that all that we have and wish for comes from Hashem.

We are now in a position to begin to understand a cryptic statement and story with Rav Pinchos Koritzer (Imrei Pinchos Hasholeim, page 465). A hot rain once descended on the last day of Pesach. The great rebbe opened the window and declared, “Since it has rained, this year the wicked will have a downfall,” adding, “Es iz ah seichel – It is only logical.” Although Rav Pinchos did not elaborate at the time, one of his other comments sheds light on his declaration. He told the story (ibid., page 464) of a troop of Russian soldiers quartered for Shabbos in the city of Pyekov. It rained all of Shabbos, but as soon as the soldiers had traveled two miles from the city, not a drop of rain could be seen. The rebbe explained this with another seemingly enigmatic comment. “In a city where people sleep a lot,” he announced, “there is much rain, for rain covers the mochin (higher intelligence and spiritual connection). When the mind is clear, the rains do not fall. For that reason, during the days of Rebbi, there was no rain (Bava Basra 8a), since Rebbi was a towering intellect. During the Russian occupation of Pyekov, there was a bilbul hamochin – people could not concentrate properly – and so the rains did not cease. As soon as they were gone, so was the rain.”

Perhaps the rebbe of Koritz was teaching us the secret of why we wanted rain but Hashem decided that we would receive dew. Rain can be crucial and wonderful, but it does not come from as high a place as dew. The rain does not always bring out that which is best in us, only our most primitive needs and yearnings. Hashem wants us to aim higher, to bring out the dew within us, as the Sheim MiShmuel taught. But then Hashem wants us to ask for rain in the same way as we receive the dew, out of internal change, spiritual growth and utilizing the long winter nights for Torah. Then, and only then, may we ask for tal and matar in the same breath and in the same bracha. May Hashem indeed shower us with all of His brachos.