When The Media Circus Came To Town 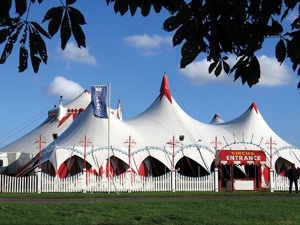 The world has just witnessed a sensationalized murder trial in Orlando, Florida, in which the American justice system has been vindicated in a most dramatic way. The Casey Anthony debacle is a cautionary tale about the power of an uncurbed press and the social media networks to make a mockery of the justice system. Thinking people applaud the fact that in the face of overwhelming pressure to convict, a jury found the courage to uphold the Constitution that grants every citizen the presumption of innocence, and obligates the state to prove guilt beyond all reasonable doubt.

In the face of a media lynching so vicious and relentless that it transformed a local case about an unknown defendant into a national fixation, a guilty verdict was declared all but certain. Yet, the jury did not follow the script. It found the defendant, a young woman accused of murdering her two-year old, not guilty.

The verdict stunned hundreds of thousands of trial watchers. The 22-year-old defendant, exposed as a practiced liar, would have faced the death penalty had she been convicted. Instead, she will now walk free.

A Lurid Narrative Unsupported By Evidence

Driving the not-guilty verdict, despite indications of foul play on the defendant’s part, was a simple truth: the absence of evidence. No witnesses, DNA or fingerprints linked the woman to the child’s death. And no conclusive evidence was brought to prove the death was a murder, as opposed to a horrible accident.

The case was purely circumstantial, with prosecutors forced to weave a lurid narrative based on speculation to fill in the gaps where facts were missing.

The news and social media sold that narrative to the public with live-streaming coverage of the trial and inflammatory commentary that abandoned all pretence at neutrality. Pervading the coverage was a knee-jerk presumption of guilt.

The public seethed with outrage at the verdict. Journalists and commentators who had gone out on a limb by siding with the prosecutors were especially infuriated. Angry crowds mobbed outside the courthouse after the verdict was read, howling that justice had been denied.

The spectacle was a chilling reminder of the power of a hate-spewing media to manipulate the masses for its own ends – higher ratings and surging profits for its advertisers. It was also a barometer showing how dangerously close to lunacy otherwise normal people can be driven.

The media had incited the public to such a fever pitch that authorities say death threats aimed at the defendant and her parents, and even at the jurors in the trial, were being taken seriously. One commentator wrote that the ugly excesses “were reminiscent of the hate-spewing propaganda of Joseph Goebbels, Hitler’s evil propaganda minister.”

In the face of such a massive incendiary rush to judgment, it is truly extraordinary that a jury found the courage and integrity to arrive at their verdict.

“The verdict does not mean we think the defendant is innocent,” one juror explained in a media interview. “It means that the evidence was not sufficient to prove she was guilty of murder beyond a reasonable doubt.”

In a free society, journalists have no business becoming self-appointed jurors or judges. Nor do the rabble in the streets. Yet, even before the jury retired, cable TV hosts and panelists, mainly lawyers, former prosecutors, judges and defense attorneys who dominate America’s airwaves nowadays, reached their verdict before tens of millions of viewers: guilty.

In the courtroom, minutes after the not guilty verdict was read, the defense attorney pinpointed the danger of trial by media in a searing critique: “We have the greatest Constitution in the world, and if the media and other members of the public do not respect it, it will become meaningless.”

The protestors outside the courtroom as well as media mouthpieces all claimed to be clamoring for justice. But for thinking people, a criminal justice trial is not about doing justice to the wronged. It is about proving guilt beyond a reasonable doubt.

“In a murder trial, the state accuses an individual of being the perpetrator of a dastardly act against a victim. The state must prove that accusation by admissible evidence and beyond a reasonable doubt.”

The noted legal expert drew a distinction between a proper legal result and a morally correct one. “Even if it is ‘likely’ or ‘probable’ that a defendant committed the murder, he must be acquitted,” Dershowitz wrote, “because neither ‘likely’ nor ‘probable’ satisfies the daunting standard of proof beyond a reasonable doubt.”

But shouldn’t the law ensure justice? How can a law that does not administer justice to the victim be moral and proper? The obvious answer is that absolute justice is solely G-d’s domain. Human beings, with the best of intentions, can only judge by the evidence. It is thus often impossible for justice and the law to coincide.

It’s About The Evidence

Underpinning Western justice is the conviction that it is better for 10 guilty defendants to go free than for one innocent defendant to be wrongly convicted. So if juries have to err, better to err on the side of exonerating a guilty defendant rather than imprisoning or executing an innocent one.

“[In the Florida murder trial], there was no evidence of a cause of death, the time of death, or the circumstances surrounding the actual death of this young girl,” Dershowitz wrote in his op-ed. “There was sufficient circumstantial evidence from which the jury could have inferred homicide. But a reasonable jury could also have rejected that conclusion, as this jury apparently did.”

At the end of the day, a criminal trial is not about who is the better lawyer – at least it shouldn’t be. It should be about the evidence. “The evidence in this case left a reasonable doubt in the mind of all of the jurors. The system worked,” concluded Dershowitz.

The Anthony Trial and The Rubashkin Case

Although factually utterly different, the Casey Anthony trial and the Rubashkin case share an alarming element: the rush to judgment amid a vicious public smear campaign.

Long before Sholom Mordechai Rubashkin stood trial for bank fraud, the public “knew” he was someone who exploited his employees and willingly hired adolescents to wield knives and lug heavy carcasses of kosher slaughtered animals.

The public also “knew” that he was someone who disdained the law; after all, he had the audacity to finance the purchase of false immigration papers a few days before his meat-packing plant was raided, did he not?

How did the public “know” all this? Months of character assault by a union that had unsuccessfully tried to represent the workers at Agriprocessors; malicious and false reports by a Jewish weekly; and a string of lies peddled by Conservative rabbis aiming for a piece of the kashrus industry succeeded in engraving in the public’s mind a perverted portrait of Sholom Mordechai Rubashkin.

Government media leaks built on this perception in the months leading up to his trial.

At the trial, Prosecutor Peter Deegan had merely to wave before the jury a cancelled check for $4,500 signed by Sholom Mordechai. Jurors were asked to infer that this was payment made by the defendant to purchase false documents for some employees “after a secret meeting behind the barn.”

Sholom Mordechai himself, on the witness stand, explained that the money was a loan to help a number of employees through a financial crunch. But months of media leaks had done their job. Deegan’s closing remarks to the jurors cemented the impression of Sholom Mordechai as a conniving lawbreaker.

If no one could hear, how does anyone know what was said? Tellingly, Brent Beebe, the individual who met with Sholom Mordechai, was never called by the government to testify about what they spoke about. His narrative would not have fit the prosecutor’s script. As for former employees Carlos and Althouse, both testified they did not know what was discussed.

Yet, the government’s sinister allegations about Sholom Mordechai pushing money at employees to finance false documents fell on fertile ground. The jury relied on this “evidence” in its findings of fraud. This totally unsupported allegation was repeated in every government brief about the case.

“Meetings That No one Can Hear”

One is tempted to use Deegan’s own suggestive language about “meetings that no one can hear” when it comes to the many meetings that the U.S. Attorney’s Office had with Judge Linda Reade during the months leading up to the ICE raid on Agriprocessors.

These secret, unrecorded meetings between the executive and judiciary are the basis for the defense’s argument that Sholom Mordechai is entitled to a new trial with an impartial judge.

The documents call Judge Reade a “stakeholder” in the raid, and cast her in a supervisory and managerial role.

Appellate attorneys did in fact call the attention of the 8th Circuit justices to these clandestine meetings in their appeal brief. Attorney Nathan Lewin focused his presentation on them at the June 15 appeal hearing. He cited the pages on which this information can be found in the ICE documents.

Yet, when the judges asked Peter Deegan, who gave oral arguments for the government, if Reade knew that Agriprocessors was the target of the raid, Deegan emphatically denied it.

He insisted that nowhere in the ICE memoranda can one find the “slightest inference” that Reade knew this information.

From all those meetings that ICE inadvertently recorded, never realizing that these memoranda would open a window into the collusion between Judge Reade and the U.S. Attorney’s Office, one can find not “even the slightest inference” that Judge Reade was in the know?”

Does the government take everyone for complete fools?