What Turned Sandy Into The Perfect Storm 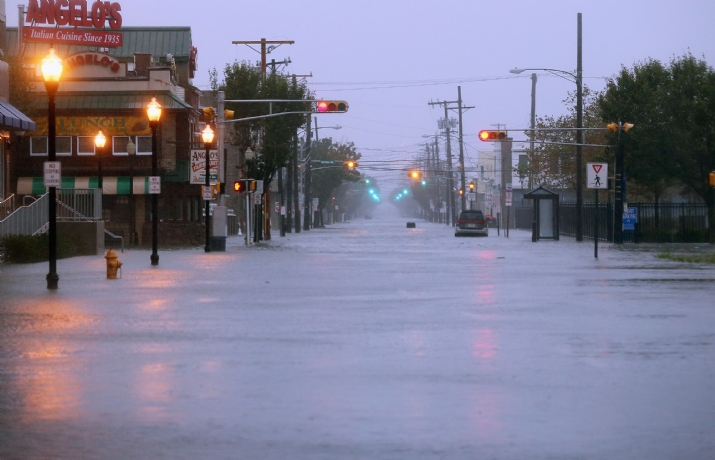 What made Hurricane Sandy into such a monstrous storm? Why was it so much worse than any storm ever to hit the New York metropolitan area before, smashing numerous records and bringing the entire region to a complete standstill? The answer, according to weather experts, was a unique combination of circumstances which boil down to this: Sandy started out as a typical tropical storm which just happened to be at exactly the right place, at exactly the right time, to become one of the greatest storms in history.
First, Sandy managed to grow into a superstorm by passing over the warm waters of the Gulf Stream along the Atlantic Coast. Whereas most tropical storms quickly lose power and disintegrate as they move north over cooler Atlantic waters, Sandy stayed over the warmer waters of the Gulf Stream, which enabled it to grow into a huge system. Hurricane force winds extended for more than 175 miles from its center, and the field of tropical storm force winds was almost 1,000 miles across.

The second factor was Sandy’s track, which normally would have taken it out to sea, to blow itself out harmlessly in the North Atlantic. But Sandy’s normal path was blocked by a stationary high-pressure system west of Greenland. High pressure systems have clockwise winds, so Sandy, as it moved north, was hit head on by currents from the Greenland system blocking its natural path that would have taken it further east out to sea.

This steered Sandy into the jet stream, a powerful upper atmosphere wind current which was also out of its normal position. The jet stream turned the storm to the northwest, towards the New Jersey coast. At that point, Sandy met up with a huge wave of cold air moving south from Canada and eastward across the United States. When the two systems met, the cold wave transferred its energy to the hurricane, creating a superstorm.

Sandy actually intensified as it approached the Jersey coast, with sustained winds climbing from 75 to 85 mph. Meteorologists measure the power of storms by the barometric pressure at their centers. The lower the pressure, the more powerful the storm. When Sandy came ashore in Jersey on Monday, it set a new record for low barometric pressure for any storm making landfall so far north along the Atlantic Coast.

At the same time, as Sandy approached the Jersey shore, it was being transformed from a conventional tropical hurricane, powered by the heat of the ocean into a nor’eastern storm powered by cold air, complete with heavy snowfall on its western side.

Sandy became a hybrid, what meteorologists call an “extratropical storm.” It combined the characteristics of a hurricane, laden with energy and moisture from tropical waters, and a winter storm fueled by southward plunging Arctic air.

What made Sandy into a “perfect storm” was the rare confluence of three mammoth atmospheric systems – the hurricane strengthened by the Gulf Stream waters, the blocking high-pressure system over Greenland, and the mass of cold air approaching from the west. Meteorologists checking their records back to 1851 could find no other hurricane which wound up taking the same path.

Born in the Caribbean, fueled by the warmth of the sea there, Sandy started out as a strong but fairly conventional hurricane. It passed across Haiti and the Dominican Republic, Cuba, Jamaica, Puerto Rico and the Bahamas, causing at least 65 deaths.

Without the interaction with two other atmospheric systems, Sandy likely would have stayed offshore, causing relatively minimal damage as it wobbled past the Mid-Atlantic region and finally died far out to sea. The Northeast region would have experienced some heavy rain and wind, some coastal flooding and beach erosion, but probably no widespread destruction. Instead, Sandy became the exception to the rule, a record breaking storm which will be carefully studied by meteorologists for years to come.

WHAT IS A STORM SURGE?

Judged by its wind speed alone, Sandy was not very powerful. It was a Category 1 storm, which is not generally considered to be a major threat to built up areas. It is strong enough to blow over trees and branches, and to bring down powerlines, but not do much direct damage to well-built structures. Sandy also did not bring a lot of rainfall with it, dumping no more than 4-8 inches on most areas directly in its path, which translated to one to three feet of snow in the colder air over the Appalachian Mountains further inland.

Sandy’s major threat was due to its immense size, and the mountain of water which it pushed along in front of it, which is known as a storm surge when it hits land. As the hurricane comes ashore, that water rises as a huge wall towering over any obstacle that gets in its way and inundates the coastline like a slow-motion tsunami. Storm surges are most dangerous in coasts with extensive shallows offshore, which is the case around New York City. When the storm surge hits those shallow areas, all the water piles up and has nowhere else to go but up and over any sea walls at the coast designed to block it. Another factor adding to the destruction caused by Sandy was that it came ashore during a full moon when the daily tides are normally higher than the rest of the month.

Finally, the angle with which Sandy approached the Jersey coast caused its winds to drive the storm surge directly into New York harbor.

Taking these factors together, forecasters predicted that Sandy’s storm surge when it hit the southern tip of Manhattan at high tide Monday night would set an all time record of 12 feet. In fact, it was even bigger, measuring 13.88 feet. This is where Sandy did its greatest damage.