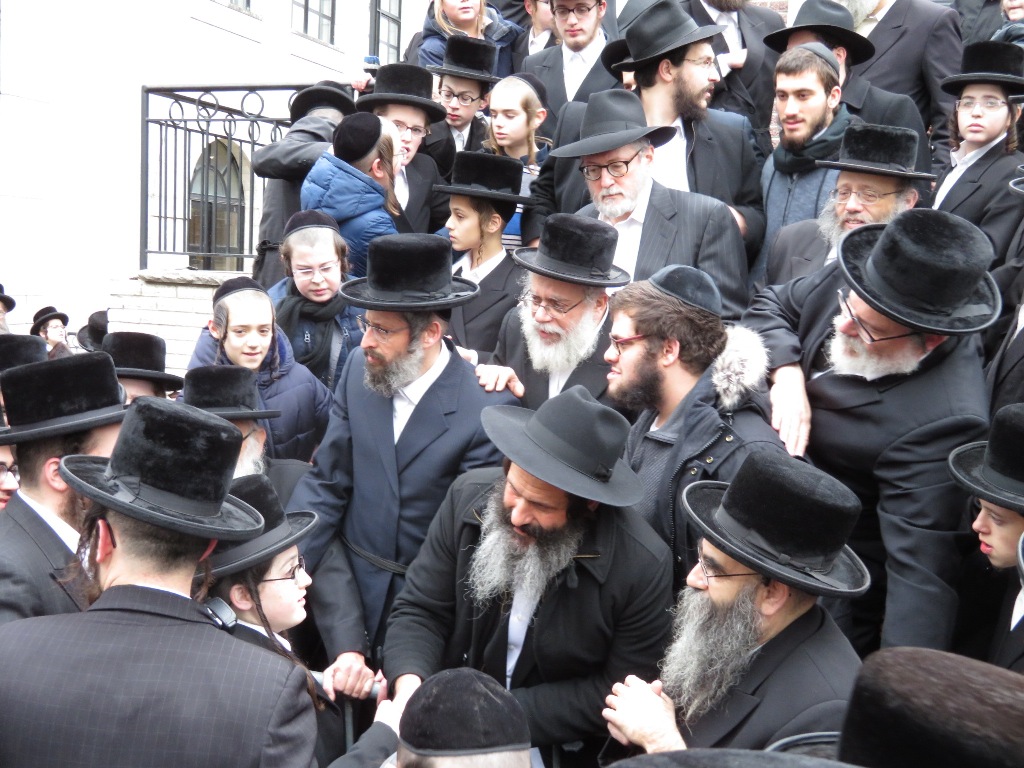 It was a frigid Wednesday, an ordinary day with extraordinary undertones.

After all, it was Zos Chanukah, day of miracles. As our sages teach us, the final day of Chanukah is the final day of judgment, the culmination of the Tishrei cycle of forgiveness and heavenly favor. It’s a day of nissim, as it has been for generations.

That afternoon, Mrs. Leah Rubashkin was in Boro Park, speaking to high school girls in several schools, as she often does, about internalizing emunah and bitachon. As she stood in the auditorium of Bais Sarah High School, she told her rapt audience of teenagers about the lesson of Alef, Bais and Gimmel, which has become the Rubashkin family’s mantra.

“Aleph is emunah, bais is bitachon and gimmel is geulah,” said Mrs. Rubashkin with firm conviction. She’s delivered this speech many times. “Today, Zos Chanukah, is gimmel Teves, so don’t be surprised if you hear that Shalom Mordechai came home tonight.”

The girls listened with admiration and a touch of pity. For how long can one nurse a dream before it dies?

They concluded the assembly with Tehillim, and then Rav Nochum Klein, the menahel, suggested that they say a few more kappitlach together for good measure.

Mrs. Rubashkin finished speaking and prepared to leave. As she was heading out, her phone rang. It was her lawyer, who had been incredibly supportive throughout the ordeal.

As Mrs. Rubashkin told me, her voice tinged with awe and disbelief, “I thought he had a grandchild, because, you know, he has a large family and he keeps me updated on his simchos. So I asked him what the mazel tov was, and he told me, ‘Shalom Mordechai is in the warden’s office. Go there right away and pick him up.’”

The scenario she’d envisioned in her dreams and during her waking hours for the past eight years had come true. The moment of geulah had arrived.

There was no time for contemplation, no time to stop in Monsey and pick up a change of clothing. Fortunately, like the tzaddikim of the previous generation, who kept their Shabbos clothes handy for Moshiach’s arrival, Mrs. Rubashkin kept her husband’s Shabbos suit and hat in her car, ever prepared for the fateful moment that she never doubted would arrive.

Many people had privately debated this outcome, but the Rubashkins had been expecting it all along. Their faith had never wavered throughout the eight long years and eight final days of their ordeal. Rav Shalom Mordechai’s body might have been behind bars, but his spirit, his d’veikus to Hashem, was unfettered.

As it had been during Yetzias Mitzrayim, which took place “bechipazon,” in a tremendous rush, the rush to pick up Rav Shalom Mordechai was frenzied.

“As I was passing the George Washington Bridge, my cell phone, which had been low in juice, started shutting down,” Mrs. Rubashkin recounted. “It was a long drive to Otisville, which was very frustrating. I was completely in the dark and couldn’t communicate with my children to let them know what was happening. Throughout the drive, I was shut off from the world.”

Mrs. Rubashkin arrived at the prison in the evening and was directed to the warden’s office, where her husband had been waiting since about 4:30 p.m. Although the Rubashkin family and the askonim involved knew that President Trump was seriously considering a commutation, they had no idea when – and if – that moment would arrive.

As Shalom Mordechai recalled, “I was in my cell, having a Zos Chanukah meal and davening for a neis, when a guard came in and told me to get my things. I had to follow him to another building. When I arrived, they told me that President Trump had commuted my sentence, and that I was free to go. Some of the guards cried, while others wished me well.”

As soon as the news went viral, a group of yungeleit from nearby Bloomingburg showed up at the prison to escort Rav Shalom Mordechai to the car with song and dance. While the Rubashkins made their way to Monsey, for a quick stop at their home on Southgate Drive, their children, friends and neighbors were gathering at their home to welcome them.

Although at first there was only a handful of people, by around 8 p.m., moments before his arrival, the street was filled. A music station, courtesy of Reb Pesach Korn’s hachnosas Sefer Torah truck, was set up, while Hatzolah and chaveirim members were on hand for crowd control. I stood on the front lawn, craning my neck along with the crowd, when a family friend invited me into the Rubashkin home for shelter from the elements.

I stood in the half-empty dining room, where the table was set with a chocolate cake, several bottles of liquor, sprinkle cookies and some challah rolls. The walls were decorated with pictures of the Rubashkins at family simchos, surrounded by their children and grandchildren. The atmosphere was poignant, filled with awe and anticipation. We had waited so long for this day…

The music began, swelling to a crescendo. Shalom Mordechai was here! The crowds thronged toward his car, half-lifting him into the street, crowding each other to shake his hand, to stand near the man they had been davening for all these years.

As he reached the front steps of his home, the home he had never seen, Reb Shalom Mordechai made a shehakol, drank a lechaim, and waved his fist in the air, singing “didon notzach.” Rav Nosson Spiegel of Bais Medrash Tefillah L’Moshe, where Mrs. Rubashkin davens, made a Shehecheyanu. The crowd then propelled Shalom Mordechai, still wearing his prison garb under his old Shabbos suit, into the modest hallway of their home.

I was standing near the staircase, flanked by the Rubashkin family, as he entered, immediately heading toward his precious grandchildren, whom he had never seen before, to give them a hug. “Zaidy iz duh,” he exclaimed in impassioned wonder. “Shoin nisht in Otisville.” Zaidy is here. He is no longer in Otisville.

The surging crowd was mesmerized by the encounter, the meeting between the patriarch and his beloved grandchildren, the moment we had been dreaming about all this time.

What followed next was especially poignant. Directed toward the dining room, Reb Shalom Mordechai started going right, towards the small study, but was soon guided left. “Ich vais nit,” he shrugged apologetically. “Ich bin kain mohl doh geven.” I have no idea. I have never been here.

Reb Shalom Mordechai had only heard about their new home in the Southgate area, but had never seen any pictures, and had no idea what to expect.

Although one might imagine that someone released from an extended stay in prison would be exhausted and dispirited, one look at Reb Shalom Mordechai’s shining face and serene countenance dispelled that notion. Both he and his wife were calm and in control, despite the incredible chaos.

As his grandchildren held tightly to their Zaidy, and the throngs of people reached out to shake his hand, Mrs. Rubashkin asked the Chaverim members if they could create some order. “Everyone wants to greet my husband,” she pleaded. “Can we give the people outside a chance?”

The front doors were opened, but no one wanted to leave. More people came in, and the house became dangerously crowded. People were leaning against the stove, the light switch, crowding into the small laundry room. There were hundreds of people on the porch, which began sagging under the weight. (The railing at the elder Rubashkins’ home in Boro Park later broke off from the force of the crowds.)

Soon, a bus, generously sent by Monsey Trails, pulled up outside, and the Rubashkin family left the home, to continue their journey to their parents and a massive celebration in Crown Heights. Reb Shalom Mordechai did not even have a chance to sit down, let alone change his clothes.

For a long time, as the bus stood in the street, which had been shut off to other traffic, Reb Shalom Mordechai danced with his sons, waving his arms in the air in exultation.

Outside, in the frigid night, the singing and dancing continued unabated, long after the bus had pulled out. Men, women and children stood in groups, marveling at the open miracle we’d witnessed on Zos Chanukah, an enduring day of nissim for generations.

I later asked Mrs. Rubashkin, “What gave your husband the chizuk to keep smiling day after day in such a depressing place?”

She responded, “Shalom Mordechai has the ability to stay above his surroundings, to focus on his mission in life regardless of what’s going on around him. He also makes a conscious decision to notice the blessings in his life, the small acts of kindness that happen a hundred times a day. That’s his hobby, his calling.”

Every day, it becomes clearer to us that we live in a fake world. That doesn’t mean that we are fake, that our families and

Since last April, Russian President Vladimir Putin has been trying to intimidate Ukraine’s pro-Western government by building his military forces along the border between the

The Push Between 1808 and 1810, 511 families of the talmidei haGra, moved to Eretz Yisroel, under the leadership of Rav Menachem Mendel of Shklov,

Chazal (Chagigah 3a) teach us that “ain bais hamedrash bli chiddush – each house of Torah study creates its own novel thoughts.” Hopefully, this applies

In A Perfect World I once had the privilege of translating the biography of Rav Meir Chodosh, the mashgiach of several great yeshivos, written by

Agency Sought 75 Years for Disclosure; Judge Gave 8 Months  In a win for government transparency, a U.S. District Judge ruled the Food and Drug