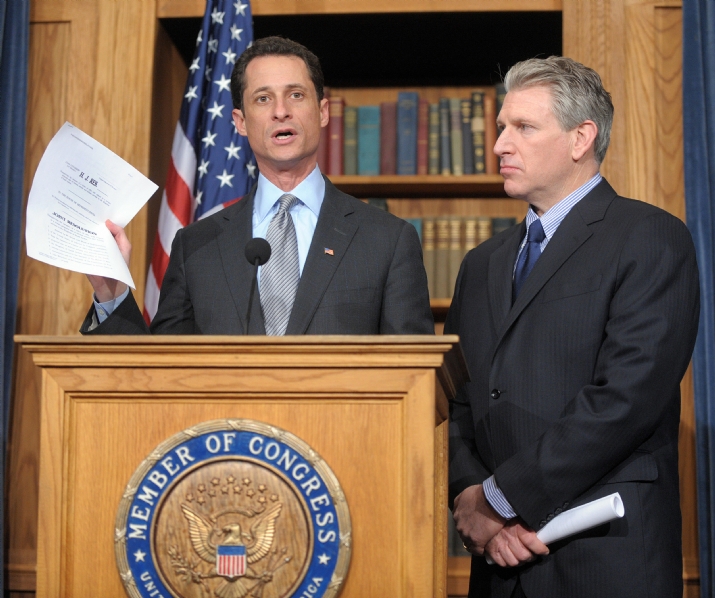 In a strongly worded letter to U.S. Attorney General Eric Holder, New York Rep. Anthony Weiner called on the nation's highest law enforcement office to investigate the â€œcredible allegations of improprieties and unfairnessâ€ in the Rubashkin case. Congressman Weiner's letter followed the emergency filing of a motion for mistrial by Sholom Mordechai Rubashkin's defense team. The motion was based on disclosures from documents released under FOIA that revealed improper collaboration between federal prosecutors and Judge Linda Reade in the months leading up to the trial. â€œChief Judge Linda Reade was repeatedly consulted by law-enforcement agents and prosecutors from the U.S. attorney's office [who then brought Rubashkin's case to trial before her]. The judge offered to help in any way possible,â€ the letter advised Holder.

“Congressman Weiner is the first elected public representative to take a principled stand against the injustice perpetrated on Sholom Mordechai Rubashkin,” said Rabbi Pinchos Lipschutz, editor of Yated Ne’eman and a leading activist and advocate in the case.

“While many are disturbed about the abuse of power that has characterized this case, the congressman has demonstrated the moral leadership and political will to correct that abuse. Hopefully, others in positions of influence will join him in calling for justice.”

Speaking by phone to the Yated, a spokesman for Mr. Weiner’s office said that the congressman “was aware of the growing concern in public and judicial circles about the Rubashkin case and felt it was important to intervene.”

“There are principles of justice involved here that can’t be ignored,” spokesman Dave Arnold said.

‘LEVEL OF COLLABORATION MADE JUSTICE A SHAM’

Even before the Department of Homeland Security documents surfaced, critics noted that Judge Reade appeared too involved in the planning process of the May 2008 immigration against Agriprocessors.

One Iowa immigration lawyer familiar with the events said his conscience didn’t permit him to take part in the criminal proceedings against the illegal immigrants that were brought to trial after the raid, because “the level of collaboration between Judge Reade and federal prosecutors made justice a sham.”

He also noted that since Reade controls the appointments to the Criminal Justice Panel, meaning she has the power to short circuit the careers of attorneys she doesn’t like, virtually no one in her district is willing to cross her.

Although many lawyers objected to the scripted plea deals and other features of fast-track justice that sent hundreds of immigrants to prison, those who were summoned to take part in the criminal proceedings felt compelled to do what was asked of them.

“When a federal judge who wields power like Linda Reade summons you,” you don’t refuse, this attorney said, requesting anonymity.

Rep. Weiner’s letter noted that six previous Attorneys General sent a letter to Judge Reade, expressing their opinion that a life sentence was wrong. They urged her to impose a sentence far more in keeping with lighter sentences issued for similar crimes.

Ignoring these entreaties, Reade imposed a 27-year sentence on Sholom Mordechai, harsher than the sentence recommended by prosecutors, Rep. Weiner wrote to the Attorney General.

In light of the revelations of judicial misconduct in the documents released by Homeland Security, Reade’s moral posturing against Sholom Mordechai is striking in its hypocrisy.

She and the state of Iowa’s highest law enforcement officials, while violating laws that forbid intimate communications between judge and prosecutors, collaborated to lock up for life a person “whose offenses never warranted a federal prosecution to begin with,” said Nathan Lewin, lead appellate lawyer for Sholom Mordechai.

What’s worse, they concealed their collaboration from the defendant and his attorneys so that they were unable to move for recusal of the judge.

Weiner’s letter to Eric Holder compared this rampant injustice to the recent Ted Stevens case in which exculpatory information was knowingly withheld from the defense. Following the discovery of this breach of law, the Department of Justice took the rare step of dropping the government’s case against Stevens.

Praising the Attorney General for taking “that difficult and commendable step,” Weiner noted that public confidence in the federal criminal process is diminished when prosecutorial and judicial abuse is allowed to go unchecked.

Those familiar with the case stress its relevance for all Americans.

“The fight for justice in this case goes beyond Sholom Mordechai. This is a fight to uphold the constitutional right to a fair trial that is at the very heart of our system of democracy,” said Rabbi Lipschutz.

“If we fail to protest the collusion between a federal judge and prosecutors, we are condoning corruption. We are opening the door to illegal practices by powerful people that can victimize any one of us, at any time.”